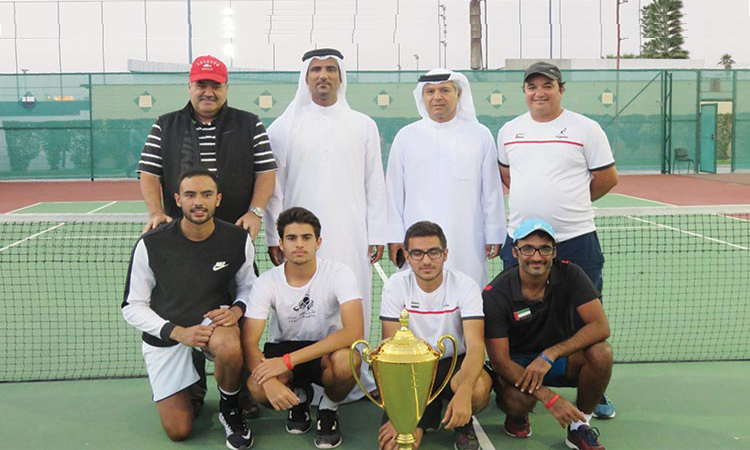 The UAE national team players pose for a picture along with the officials after attending a training session at the Al Habtoor Tennis Academy.

The UAE national tennis team is gearing up for their upcoming matches of the 2019 Davis Cup Asia/Oceania Zone, with a training camp at Al Habtoor Tennis Academy (AHTA) in Dubai.

Ahead of the premier men’s international tournament’s regional playoffs — being held in Jordan in September 2019 — the UAE national team have chosen AHTA for its unique, state-of-the-art facilities and its competitive, high-performance training environment.

The UAE team members are undergoing daily training at AHTA’s air-conditioned indoor tennis pavilion — the only such court in the UAE — with all the amenities and ambience necessary for their success being facilitated by the academy.

The players are training under the supervision of their team manager Mahmoud Khalifa Al Balushi and the technical team headed by coach Omar Behroozian Al Awadhi.

Catering for year-round tennis playing, AHTA ensures that the UAE national players are in good shape, before they head to the heated Davis Cup Asia/Oceania Zone Group IV tournament in Jordan to face top international players.

Ahmad Abdul Malek Ahli, Deputy Chairman of the UAE Tennis Association, added: “This is not the first time that Al Habtoor Group has shown such initiative. AHG has always supported the UAE’s sporting sector strongly. It enables our national team players of all ages to enjoy high-level training that matches their aspirations, in the sophisticated Al Habtoor Tennis Academy facilities.”

In a bid to discover Emirati tennis talent the Dubai Sports Council Tennis League across all age categories was launched last year.

Initiated by Tennis Emirates (TE) with support from Dubai Sports Council (DSC) and General Authority of Sports, the league has been organizing competitions taking place in nine boys, girls and mixed categories starting with Under-12s up to Under-16s.

The league was revived on a trial basis after a 10-year gap in three age categories last season. A total of 38 teams participated in the competition that started on Nov.7 and concluded on May 12.

Given the success of this initiative, Tennis Emirates decided to increase the number of age groups to include the younger lot of players.

“And from next season we want to see at least one Emirati player in each of the participating teams,” said Sara Baker, Board Member of Tennis Emirates.

“First of all we need to build our trust with the academies who are the ones to deliver us with players at the moment. We will need time to build up on this league and perhaps in a matter of ten years we will be able to have a pool of Emirati tennis players across all age categories,” she added.

There are many age group tournaments that form the tennis calendar in the UAE.

Salah Bramly, Technical Director of Tennis Emirates, said that there will be more focus on the JTI programme, which is one of development programmes designed by the ITF.

The ITF Junior Tennis Initiative operates in over 100 nations worldwide. The national level helps nations to establish a 14 and under junior development programme through the JTI.