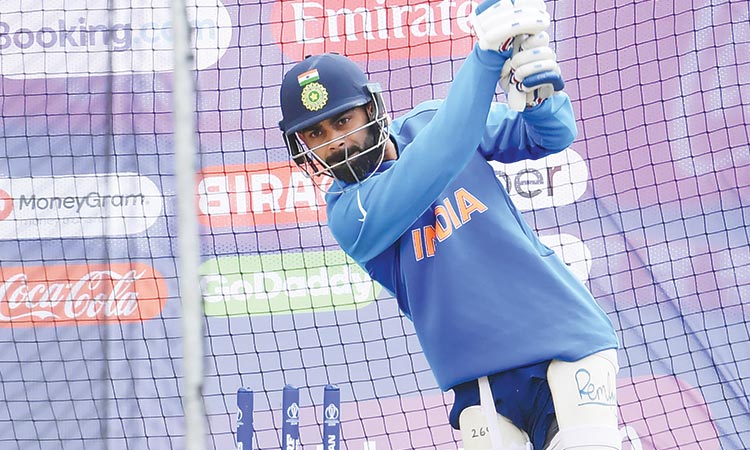 Indian skipper Virat Kohli bats in the nets during a training session at Headingley Stadium in Leeds on Friday. Associated Press

Dinesh Karthik insists India won’t take it easy in their last World Cup group match against Sri Lanka on Saturday because the title contenders want to go into the semi-finals on a high.

Virat Kohli’s side have won six of their eight group games after beating Bangladesh in their previous outing to seal a semi-final berth.

Rather than rest on their laurels, India batsman Karthik, who made his World Cup debut against Bangladesh, is adamant the team plan to fine-tune their game at Headingley this weekend.

“For all the four teams that qualify, it’s going to be a massive game (the semi-finals). So that’s in the back of the mind,” Karthik told reporters on Friday.

“But having said that, I think we’re professional enough to go out there against Sri Lanka and play a very clinical game.

“There is scope for improvement in all aspects of our game. We’ve been playing a good tournament until now, but I’m sure personally each player would have some box to tick.”

India, who are second in a table currently topped by Australia, need to beat Sri Lanka to leapfrog Aaron Finch’s side.

They also need help from eliminated South Africa, who would have to beat Australia later on Saturday at Old Trafford for India to end in top spot.

Karthik insisted India, who will take on either New Zealand at Old Trafford on Tuesday or England two days later, have no preference for their semi-final opponent.

“It’s hard for me to say, obviously, which team will be a threat. But on any given day any team can stand up. And that’s the beauty of a tournament like a World Cup,” Karthik said.

“We’re really looking forward to it as a team. At the same time, I think we have a game to play in Leeds. We’ll do the best we can tomorrow.”

India’s middle order has faced flak for going slow in the final half of the innings in recent matches, with Karthik included in the line-up in place of underfire Kedar Jadhav for the Bangladesh game.

Karthik, a wicketkeeper-batsman who bats at number seven, said adapting to conditions is key on English wickets.

“Obviously, it depends first thing on the conditions. And also it depends a little bit on how many batsmen you have behind you,” he said.

“When I go in at No. 7, I need to judge this -- assess the situation of the game and then play accordingly.” Teams have rarely been able to chase down scores of over 250 in this World Cup, but Karthik insists India are equipped to handle any possibility that comes their way.

“I think we as a team believe that we’re good chasers, because that’s what we do day in, day out,” he said. “And we’re a team that actually has the ability to handle pressure very well. We’d back ourselves to chase and get the totals that we believe we can achieve.”

Meanwhile, Sri Lanka skipper Dimuth Karunaratne makes no bones about the fact that his team hasn’t played on expected lines in the 2019 edition of the World Cup, however his team intends to go out on a high.

In fact, their biggest nemesis in recent years has been Rohit Sharma and the captain said they have plans for all the players going into the final game.

“Every batsman have big points. We took a couple of videos, not only Rohit, Virat but all the top six batsmen. We have a plan for everyone. But if you can’t execute really well,... the plans aren’t working. So the point is we have to execute really well against those batsmen.

“We know they are really dangerous. Once they get set, they will go for the big ones. So we have some plans, we will be trying to restrict them. And if we can execute really well, definitely we can get him (Rohit) out and early,” he said.

Commenting on the plans going into the game looking at an otherwise disappointing campaign, he said: “We have to win the game to end up in the fifth or sixth position, that’s our plan. So we intend to do our best. “I think here in Headingley we’ve got some lucky games. If you take the Test matches and ODIs, we did really well. So we’re trying to give our best shot against India. We’re playing the same track that was used against West Indies and Afghanistan. So hopefully we can get some turn.”

Talking about some of the positives for the team, Karunaratne said: “I think if you take the batting line-up — Avishka Fernando and Kusal (Perera) and the opening pair and some middle order, if you take — we do well in the middle order the first few games, but if you take the last matches, we capitalised well and we managed to bat really well in the end of the tournament. But I think that it’s too late.

“Avishka Fernando -- he’s playing really good, doing really good. He got, in three games he showed that he can do it, he can produce some runs for Sri Lanka. And he’s one of the future stars.

“If you take the bowling lineup, they did really well, especially (Lasith) Malinga and Nuwan Pradeep. They’re the good sign. This World Cup those are the things, I feel will go forward. Those are the positive points in this tournament.”