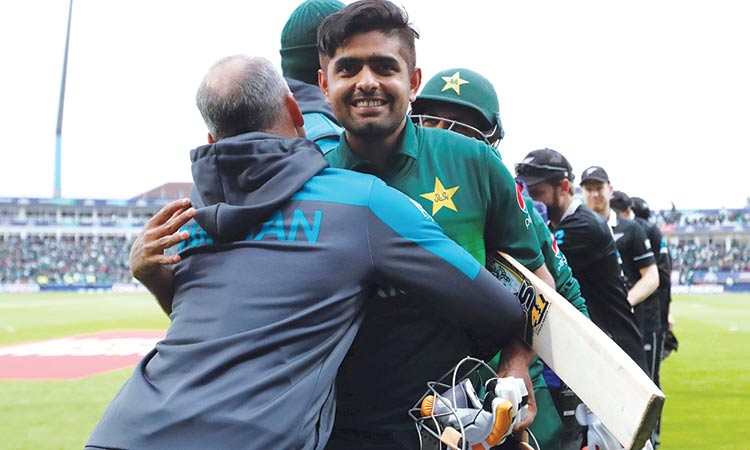 Pakistan’s Babar Azam (facing) celebrates with a supporting staff after their victory against New Zealand. Reuters

After a depressing start and remarkable revival, a resurgent Pakistan look poised to emulate their 1992 feat again.

Events are churning out exactly in the same way as it did 27 years ago when Pakistan lifted the trophy.

The results, format, rules, washout everything is so identical that it gives a feeling of a déjà vu.

If the circumstances could be personified then 2019 edition of the World Cup would be the perfect doppelganger of 1992.

Pakistan still have to win their two remaining games and wait for the other results to go in their favour to claim a semi-final berth but going by the turn of events it looks that history is likely to repeat itself again.

Though they have to play every game like a final to remain afloat and repeat their success but the signs are encouraging for them and those die-hard aficionados who refuse to give up even when the odds are highly stacked against their team.

Before any statistician, it is this genre of the fans who collect bits and pieces to decode a riddle and give the jigsaw a much pleasant looking picture.

Things which were looking to be falling apart now seem to be falling in line for a resilient and gritty Pakistan. And these fans have all the reasons to be optimistic as the spooky feeling has been replaced by a sense of jubilation as it does not look sinister any more though it would be a premature celebration.

The life seems to have come full circle for Pakistan after a long wait of 27 years.  The similarities between both the events are simply jaw-dropping. The format of the 1992 edition was more or less like that of 2019.

The 1992 tournament featured nine teams, with everyone playing against everyone else and the top four progressing to the semi-finals. In 2019, the format is same with the addition of one more team only.

The most stunning and compelling similarities –– Pakistan’s sequence of results in both the tourneys.

In 1992, Pakistan were the first team to beat Martin Crowe’s unbeaten New Zealand and the victory paved the way for the semi-finals.

If these facts are not enough to support Pakistan’s credentials, here are some more though a little weird.

Pakistan legend Inzamam-ul-Haq was the discovery of the 1992 World Cup, who went on to serve the country for two decades. This time around it is his nephew Imam-ul-Haq, who is making waves.

Left-hand batsman Aamir Sohail was named the Man of the Match in their sixth game 27 years ago, fast forward to 2019 it was another left-hander and bearing the almost the same name Haris Sohail, who stole the show in their sixth game.

And now comes the most bizarre part of the story that will send a shiver down every one’s spine. In 1992, Asif Ali Zardari was in jail and he is again in jail.

Now if Pakistan go on to win the World Cup, it might leave skipper Sarfaraz giggling with a dream of becoming the country’s premier one day like the legendary Imran Khan.