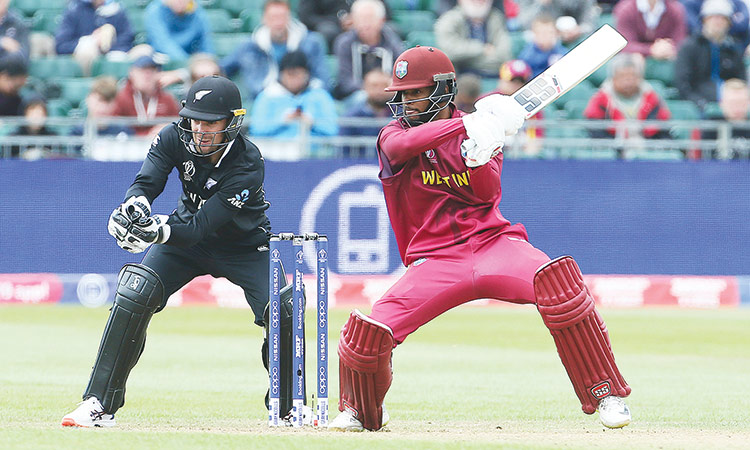 Powered by a 86-ball 101 by wicketkeeper batsman Shai Hope and an 82-run partnership for the seventh wicket in just 39 deliveries by Andre Russell and Jason Holder, West Indies packed too much of a punch for the other dark horses of the tournament, New Zealand, beating them by 91 runs in their last warm-up match at the Bristol County Ground in Bristol, England, on Tuesday.

runs in reply while folding up in 47.2 overs.

Chasing down a total of 422 was never going to be easy and New Zealand got off to a horrible start losing three wickets inside 10 overs.

Martin Guptill played an unusual slow inning, scoring only five runs off 18 deliveries till his wicket was claimed by left-arm medium-pacer Sheldon Cottrell who had the New Zealander skying it high over mid-wicket where he was well caught by Darren Bravo. The decision to send Henry Nicholls to open the innings instead of Colin Munro backfired as he got out for 15, claimed by a short one from fast bowler Kemar Roach who had his victim caught by skipper Holder running in from mid-wicket to take the catch at the non-striker’s end.

New Zealand’s veteran Ross Taylor too succumbed to the pressure, scoring just two runs in 15 deliveries before getting out to a cracker-jack of a ball by right arm fast bowler Oshane Thomas, who induced a catch to Bravo at gully.

New Zealand skipper Kane Williamson, however, hit a fighting half-century in 42 deliveries, at which stage his team had reached 96/3 in 20 overs.

However, with the required run rate fast mounting, Williamson, who scored 85, was the next to go, run out, as a result of a terrible mix-up. There was no need to go for the third run and as a result, New Zealand were 153/4 in 26 overs.

James Neehsam was the fifth wicket to fall, outfoxed by Ashley Nurse who had him smartly stumped by Hope.

Blundell in the meantime was going strong and completed his century in just 83 balls. New Zealand were 254/5 in 39 overs at this stage. His was the sixth to go, out for 106 (89 balls, 8x4, 5x6), caught behind off Carlos Brathwaite’s bowling. Brathwaite came back to take Mitchell Santner’s wicket in his next over and followed it up with Colin de Grandhomme’s scalp in his eighth over.

Left-arm orthodox bowler Fabian Allen then claimed Matt Henry’s wicket, the ninth to fall at the team score of 315. Ish Sodhi was going hammer and tongs at the West Indian bowlers. His swashbuckling knock though was brought to an end by Allen who had him stumped by Hope for 39 off 16 balls. New Zealand thus lost their 10th wicket at the score of 330 in 47.2 overs.

For West Indies, Brathwaite with 3/75 off 9 overs was their most successful bowler, followed by Allen who took two. Cottrell, Roach, Thomas and Nurse finished with 1 each.

Earlier, asked to bat, West Indies got off to a flyer with openers adding 59 for the first wicket before Trent Boult got rid of Chris Gayle. Hope then joined Evin Lewis and hammered the New Zealand bowlers all over the ground. The duo shared a solid 84 run-stand before James Neesham removed Lewis.

Hope, however, catapulted the West Indies innings and slammed a brilliant ton taking the score past 250. After Hope’s dismissal at 267, Russell and skipper Jason Holder took charge of the innings and laid a foundation for the Caribbean side to breach the 400-run mark.

The Kolkata Knight Riders all-rounder smashed a 54 off 25 balls hitting seven boundaries and three sixes before losing his wicket to Boult. Whereas Holder missed out on his half-century scoring 47 runs from 32 deliveries hitting three fours and three sixes.

Carlos Brathwaite and Ashley Nurse too chipped in with few meaty blows to get West Indies past 400 in the 47th over.

For New Zealand, Boult took four wickets for 50 runs in 9.2 overs helping his team bundle out West Indies with four balls to go.

Matt Henry turned out to be the most expensive bowler conceding 107 runs in his 9 overs. Henry picked up two wickets but bowled two no balls and 8 wide balls which worsened his bowling figures.