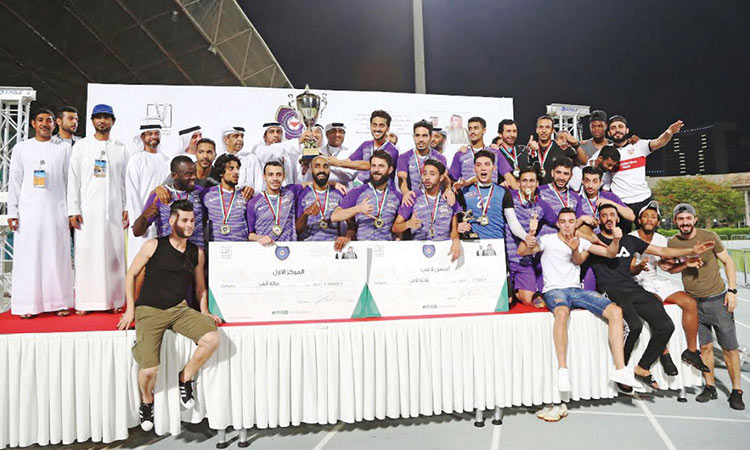 UAE AFU players celebrate with the trophy after winning the final against Sirisao at the Dubai Police Club on Sunday.

The two-time winners UAE AFU defeated Sirisao 9-8 on penalties in the final of the ninth edition of the tournament to win the crown after emerging winners in 2013 and 2014.

Sirisao opened the account through Mohammed Ali and managed to go up 2-0 after Sultan Rashid netted a goal in the 11th minute.

Despite under pressure, UAE AFU pulled one back when Haitham Ainah found the net at the fag end of the first-half.

UAE AFU added to their first-half tally after the lemon break to restore parity.

Later, both teams failed to go gain the upper and the match had to be decided by way of a penalty shoot-out.

UAE AFU’s Osama Al Shuaibi was crowned the best player of the tournament.

Prominent among those who were present during the presentation ceremony were Colonel Ali Khalfan Al Mansouri, Director of the Department of Sports Affairs of Dubai Police, Ahmad Al Marzouqi, Executive Vice-President and General Manager of Retail Distribution at Emirates NBD, Tarek Al Rumaithi, Member of the Higher Organizing Committee, and Nader Rashid, Director of Tournament and Marketing, First Lieutenant Abdul Aziz Al Shamsi, Chairman of the Technical Committee.

Brigadier-General Abdullah Hussein Al Ahli, Assistant Commander-in-Chief of the Dubai Police Department for Welfare and Community Affairs, appealed to Sheikh Mohammed Bin Maktoum Bin Rashid to continue organising the tournament as it is considered one of the most important Ramadan football events in the country.

Praising the success of the ninth edition, Ahli said: “The continuity of the championship for the ninth year in a row confirms the growing successes and achievements since its inception in 2011, thanks to the great support of the founder of the championship Sheikh Mohammed Bin Maktoum Bin Rashid Al Maktoum primarily, and to the members of the organising committees.

“This tournament has traditionally been an attraction for some of the national team stars playing alongside the upcoming players from across the country,” he added.

Dr Saeed Al Hassani, Undersecretary of the Ministry of Higher Education and Scientific Research, Chairman of the UAE Association for Universities, praised the efforts of the team.

Hailing the players for winning the third title, Hassani said: “Our unprecedented achievement in the Sheikh Maktoum Bin Rashid Ramadan Football Championship was a result of the good preparation and determination of our players.

“Although we were two goals down but our players never gave up,” he added.

“Rahman was successful in the putting the right strategy which helped us in winning the final.

Muhannad Taher put Dubai Police ahead in the first-half. Later, he completed his hat-trick to give the hosts a 3-0 cushion.

Dubai Police increased their goal tally when Mohammed Taleb scored their fourth goal which was followed one minute later by Abdullah Issa who netted their fifth. The hosts scored two more in the dying minutes of the game to register an easy victory over the debutants.

Ahmed Al Mazmi, coach of the Dubai Police team, praised the technical level of the championship in general and the performance of his players.

A total of 19 teams took part in the tournament that is being held in the Holy Ramadan since 2011 in the memory of late Sheikh Maktoum Bin Rashid Al Maktoum.