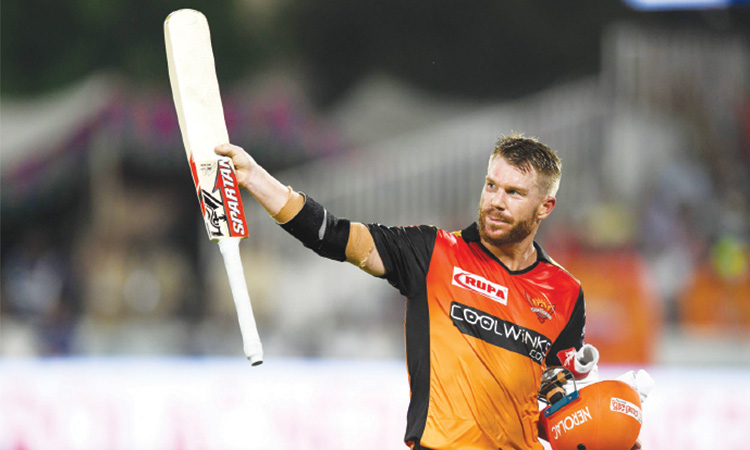 David Warner gestures during their IPL match against KXIP in Hyderabad on Monday. AFP

March 24, 2018 changed the face of Australian cricket forever. In what seemed to be an innocuous post-lunch session on the third day of the third Test between South Africa and Australia in Cape Town turned on its head as Australia opener Cameron Bancroft was caught on camera rubbing the ball with a yellow object which was later revealed to be sandpaper.

Following an initial ban by the ICC, Cricket Australia banned Bancroft for nine months while Australia skipper Steve Smith and deputy David Warner were banned for 12 months each. The duo also had to miss the 2018 edition of the Indian Premier League as the BCCI decided to keep them away from the competition taking into consideration the ban from CA.

Exactly a year later, Warner announces his IPL return with a bang. On March 24, 2019, the opener hit a match-winning 85 for Sunrisers Hyderabad (SRH) against Kolkata Knight Riders (KKR). But this was not just a one-off knock. In fact, this was just the teaser of what was going to be an amazing journey for the 32-year-old.

“There is a big difference because he (Warner) is a world class player. For us, as a franchise, we are so proud of what he has achieved for Sunrisers. He is not only a premier match-winner but his leadership skills are also unmatched,” SRH mentor VVS Laxman had said before the start of the IPL 2019.

Match after match, Warner kept on piling runs and alongside England’s Jonny Bairstow (a rare English-Aussie camaraderie which can be seen only in IPL), won matches of Sunrisers Hyderabad.

“When someone like Warner bats like that, it’s very less margins for the bowler,” Ajinkya Rahane had said after SRH had beaten Rajasthan Royals in March.

In a total of 12 matches that Warner has played in this edition, Warner has amassed 692 runs at a magnificent average of almost 70, including a swashbuckling 81 in his final outing against KXIP on Monday. He scored eight fifties and a century, thus announcing his return to competitive cricket in a grand style.

This was third consecutive IPL season for Warner where he had scored more than 600 runs. In 2017, the Australian opener had scored 641 runs from 14 matches in and had collected 848 runs from 17 matches when Sunrisers won the IPL in 2016.

“I have had time off to work harder at my game. I put the bat down for 16-18 weeks and just worked hard on being the best father and husband that has worked for me,” Warner said on Monday.

Off to Australia to prepare for the World Cup, Warner’s destructive form has rung alarm bells for all the nine other teams which are going to participate in the showpiece event starting from May 30 in England and Wales.

“This World Cup, you’ll see some high scores. Hopefully the ball doesn’t swing as much. Obviously England are the home team and they’re great. We’re world champions. I’m sure it’ll be great. I am looking forward to it and this was a stepping stone to that,” he signed off from this edition of the IPL.

Meanwhile, having already qualified for the playoffs, Delhi Capitals will look to consolidate their top position when they face Chennai Super Kings (CSK) at the MA Chidambaram Stadium on Wednesday.

DC qualified for the playoffs after seven years as they defeated Royal Challengers Bangalore (RCB) by 16 runs at their home ground on Sunday.

The young team, led by Shreyas Iyer, seems to have their bases covered with all departments performing in this edition of the IPL. Players like Shikhar Dhawan, Prithvi Shaw, Iyer and Rishabh Pant have led from the front in the batting department, while in bowling they have been spearheaded by Kagiso Rabada, who is having a dream run this season.

On the other hand, CSK have not been at their best this season despite being the first team to seal a playoff berth. In the two matches that MS Dhoni has not played, they have not been able to handle the pressure and have lost the game. So, they would be desperately hoping that their regular skipper regains full fitness before the business end of the tournament.