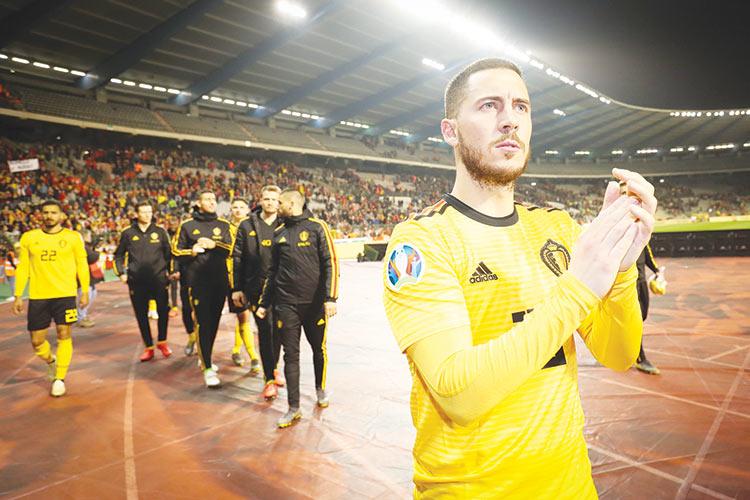 Paris: World Cup semi-finalists Belgium earned a battling 3-1 win over Russia in Brussels as Hazard struck twice for Roberto Martinez’s side in their opening game in Group I.

Youri Tielemans rounded off a flowing move with a crisp low strike to fire Belgium ahead on 14 minutes at the King Baudouin Stadium, but Thibaut Courtois gifted Russia an immediate equaliser.

The Real Madrid goalkeeper, put under pressure by Artem Dzyuba, panicked and scuffed the ball straight to Denis Cheryshev who duly swept home into an empty net.

Michy Batshuayi had a shot cleared off the line, and later hit the post, but Hazard restored Belgium’s lead just before half-time after drawing a foul from Yuri Zhirkov in the area.

The Chelsea playmaker sealed the three points two minutes from time with an alert finish, while Aleksandr Golovin was sent off for Russia just before the end.

“I enjoyed myself tonight. I take a lot of pleasure from this victory, in which I scored two goals,” said Belgium captain Hazard.

“After our last game against Switzerland (a 5-2 defeat), we had to respond in front of our own fans.”

Cyprus thrashed San Marino 5-0 to provisionally seize top spot in the group, while Scotland crashed to a humiliating 3-0 loss in Kazakhstan -- a nation ranked 117th in the FIFA rankings.

Meanwhile, in Rotterdam, Memphis Depay pounced on a sloppy backpass to put the Dutch ahead inside 60 seconds against Group C opponents Belarus.

The Lyon forward set up Georginio Wijnaldum for their second on 21 minutes, with Depay tucking away a penalty after half-time following a foul by Mikhail Sivakov.

Depay whipped in a cross for skipper Virgil van Dijk to nod in a fourth late on, leaving the Netherlands level on points with Northern Ireland, who beat Estonia 2-0 with Niall McGinn and Steven Davis on target in Belfast.

“It’s hard to choose between the goals and the assists,” said Depay.

“The first goal was good because it was the outside of my foot, but I also enjoyed the flick that set up the second.” Krzysztof Piatek continued his magnificent season as he came off the bench to grab the only goal in a 1-0 win for Poland away to Austria in Group G.

The AC Milan forward, already with 19 goals in 27 Serie A appearances this term, has now scored twice in three outings for his country following his international debut in September.

World Cup runners-up Croatia, relegated from the top tier of the Nations League last year, ground out an unconvincing 2-1 victory against Azerbaijan in Zagreb.

Rami Sheydaev put Azerbaijan on top on 19 minutes before Croatia hit back through Borna Barisic and a 79th-minute effort by Andrej Kramaric in Group E.

Slovakia top the section on goal difference following a 2-0 defeat of Hungary in Trnava, as Ondrej Duda and Albert Rusnak scored for the hosts.

Meanwhile, three men who shouted racist abuse at Germany’s Leroy Sane and Ilkay Gundogan during the friendly with Serbia turned themselves in after another fan posted a video on Facebook, police said Friday.

After the images, taken during Germany’s 1-1 draw with Serbia in Wolfsburg on Wednesday, appeared online, “they presented themselves and confessed they were the three alleged perpetrators”, confirmed local police spokesman Thomas Figge.

“They gave a preliminary statement presenting their version of events.” Another supporter, identified by German tabloid Bild as Andre Voigt, a journalist who had gone to the match as a fan, filmed the trio insulting Manchester City players Sane, whose father is from Senegal, and Gundogan, the son of Turkish immigrants.

The German Football Association on Friday condemned the verbal attacks in the “strongest terms” and said it would ban from matches any perpetrators confirmed to have made the chants.

Voigt said the men had chanted “Heil Hitler” and shouted “we need another small Austrian”.

“Every time Sane touched the ball, they insulted his colour. Gundogan was insulted as a Turk. They spoke in pseudo-Turkish accents every time he had the ball. And then they’d start again with ‘black, black, black!’”

“The police will continue their investigation into incitement to hate and send the file to the prosecutor’s office early next week,” said the police spokesman.