America needs Sanders now more than ever, but... - GulfToday

America needs Sanders now more than ever, but... 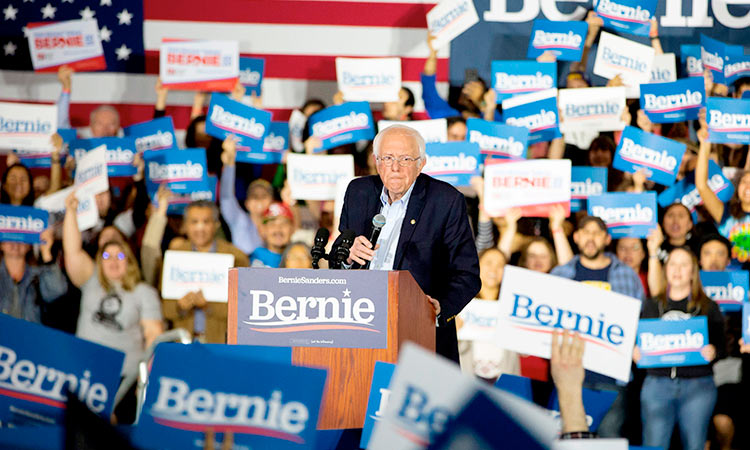 Will Bunch, Tribune News Service
He ran for president more than once, and never really came that close to reaching the White House. Many argued his defeats were proof that America would never accept his socialist ideas. Even some of his allies wondered if he stuck around too long instead of passing the torch to the next generation. But over time, most of his seemingly radical ideas about improving the grim plight of the American worker gained strength, and eventually many became reality.

That was Eugene V. Debs, the fiery labour leader who became head of the Socialist Party of America and ran for president five times around the turn of the 20th century. It’s all too easy to see how Debs became a hero and role model for the democratic socialism of Vermont Sen. Bernie Sanders. Like Sanders — who famously made educational filmstrips about Debs in the late 1970s when it looked like his political career was going nowhere — Debs never stopped pushing for his ideas like a 40-hour work week, child labour laws or union power that were dismissed as extremist ... until suddenly they weren’t.

In American history, Debs would probably rank near the top of any list of men who ran for president and lost, and yet managed to change America, along with the likes of Barry Goldwater, the godfather of modern conservatism, and the prairie populist William Jennings Bryan. Today, we can add Sanders — who ended his 2020 White House bid last week and at age 78 is all but certain not to run again — to that list. Bernie’s 50-year march from the literal wilderness of rural Vermont into the mainstream of US politics is one of the epic narratives of the 21st century.

While most other politicians who came of age in the 1960s buckled under the weight of the Reagan years into mushy centrism or worse, Sanders’ remarkably consistent messages about income inequality and the need for a European-style social-welfare state that includes universal health care and higher education proved prescient as the 2008 fiscal collapse, the Great Recession that followed and now — most regrettably — the coronavirus crisis has washed over the vast American middle class.

The irony of Sanders leaving the centre stage of the presidential race right as the cataclysmic economic consequences of the public health lockdown slam America is hard to bear. The numbers out there seem staggering — nearly 17 million jobless claims in just three weeks — but they’re really not when I think of how all the family members or their friends I know under 35 are now suddenly unemployed or “furloughed” or struggling to pick up enough hours. Long before this happened, Sanders (and others) were out there warning about the stunning fragility of an economy where 40% have reported they don’t have even $400 saved if an emergency hits.

Now an emergency has hit, and it looks even worse than anyone imagined. Heard about Pittsburgh ... or San Antonio, or Maine? In all of those places, a “Field of Dreams”-length endless line of cars has waited hours in desperation for a box of free food, at just the very beginning of a Great Depression-sized meltdown that could last for months if not longer. And it’s not just basic nutrition. Because of all the job losses, millions of Americans — including many under age 45 — abruptly find themselves without health insurance right when a global pandemic is spiking hospital admissions. The nation may absorb a new wave of medical bankruptcies before any economic recovery starts.

In running for president in 2020, Sanders made single-payer health insurance — what citizens have in most advanced Western democracies — the cornerstone of his campaign. Although his idea of “Medicare for All” is arguably the simplest way to get there, it also seemed too complicated and disruptive for a lot of voters as the 2020 primaries drew near. Many simply wanted to keep their insurance. But now, with tens of millions instantly jobless, most voters are either experiencing a Kafka-esque quest for coverage or know someone who is. COVID-19 has changed the game.

To be sure, Bernie Sanders as the 46th president of the United States wouldn’t have solved these problems overnight, even if a November political landslide magically washed away the destructive obstructionism of Mitch McConnell for good. But Sanders won’t be the next president. Even as many of his ideas took root within the Democratic Party, that party’s two core voting blocs rejected the man behind them. The fear factor, that Bernie’s lifetime of pretty-out-there leftism would guarantee four more years of President Donald Trump, proved too large an obstacle. Pragmatic older African American voters never warmed to him, while many white suburban women — with the biggest spike in 2020 turnout — can’t forgive him for challenging Hillary Clinton in 2016.

Twenty million desperate, hungry jobless Americans can’t wait until Jan. 20, 2021, for answers. In the first three coronavirus relief bills from Congress, Democrats used their two power points in Washington — their House majority, of course, and to some degree the ability to filibuster in the Senate — to win some concessions, like the $600 add-on to state-administered jobless benefits, that Democrats don’t usually get. Some of Sanders’ congressional colleagues — most notably Sen. Elizabeth Warren, who arguably ran an even better campaign for president, and got a rawer deal — are showing true leadership in pushing for even more aggressive, more people-friendly economic stimulus. Sanders has always been more of a political bomb-thrower than a patient lawmaker, but the full weight of his political revolution is desperately needed on Capitol Hill right now.

Then there’s the Democrat who would be president, presumptive nominee Joe Biden. I was hardly alone among voters in initially ranking the 77-year-old Biden — far too cautious, seemingly out of touch, and weighed down by his past — near the bottom of his party’s pile. But now that Biden on the November ballot is inevitable, it’s time to focus on one of his strengths. The former vice president is less of an ideologue and more of a survivor who feels the winds of change (like, for example, when he was quicker to embrace gay marriage than Barack Obama), and reacts accordingly.

The Sanders campaign motto — “Not me. Us” — feels like it means even more now that he’s out of the race. It’s going to take a village — progressive lawmakers like Sanders, Warren and Rep. Alexandria Ocasio-Cortez, activist groups like Sunrise Movement, and everyday folks like, well, us — to get immediate coronavirus relief to more people and to make sure that a Biden presidency becomes a second New Deal for Americans. That now falls not upon the President Bernie Sanders that — just like his idol Eugene V. Debs — will never be. It falls upon us.