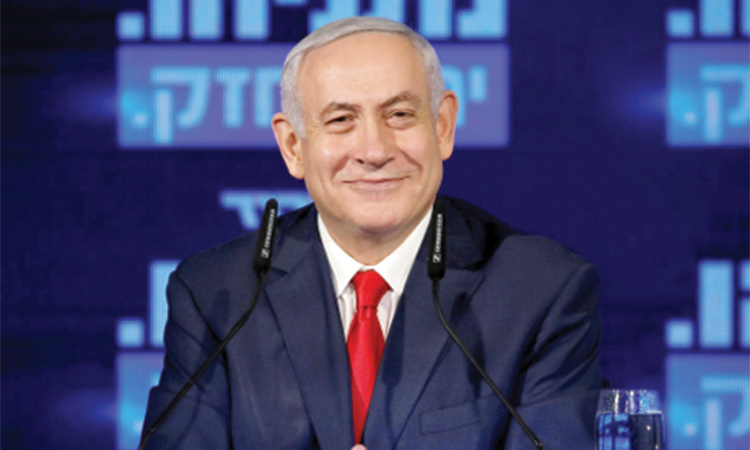 Netanyahu’s strong support is due to political longevity, aggressive campaigning, and strategic use of social media.

Ahead of Israel’s April 9th general election, a poll conducted by the army radio found a newly minted opposition party was still leading the long dominant Likud by a narrow margin. The Blue and White party, led by Benny Ganz, was set to receive 30 seats and Prime Minister Binyamin Netanyahu’s Likud was slated to win 28 seats in the 120 member parliament, the Knesset. A range of smaller Israeli Jewish parties were predicted to enter the Knesset, but the Arab list would not garner enough votes to secure seats.

Forty-five per cent of poll respondents named Netanyahu as the best choice for prime minister, 33 per cent Ganz, and 22 per cent did not say.

Netanyahu’s strong support is due to political longevity, aggressive campaigning, and strategic use of social media. He exploits the prime minister’s official Facebook site which has 1.2 million followers as well as a slew of smaller sites popular with fans as well as twitter, and an online Likud television channel. It is interesting to note that the largest number of Netanyahu’s followers are in the US, where they nearly double the figure for Israel which is 550,000.

These platforms enable Netanyahu to refute charges of criminality arising from a number of indictments for corruption set to be officially lodged after the election. Netanyahu accuses truth-telling journalists of propagating “fake news” — an echo of Donald Trump — and Ganz of being soft on Iran, the country Netanyahu contends is determined to attack and eliminate Israel. Netanyahu also claims Gantz is prepared to “give (Israeli) land” to the Palestinians.

Like Trump’s base, Netanyahu loyalists are not likely to abandon him over mere wrongdoing, but undecided voters very well could, denying the Likud a plurality. Netanyahu is charged with accepting $300,000 (Dhs1.1million) in gifts from wealthy Israeli expatriates in exchange for tax exemptions upon repatriation. He proposed a deal with a leading newspaper which would provide him with positive coverage, eliciting charges of breach of trust and fraud. While communications minister between 2014-17, Netanyahu helped an investor reap millions of dollars when he sold an overpriced satellite network to Israel’s largest telecommunications firm. Netanyahu’s reward was, again, favourable coverage on a leading news site.

Netanyahu was also involved in the corrupt purchase of German submarines for Israel and, without consulting the military, gave a green light for Egypt to do the same, although critics argue the u-boats could threaten Israel’s security. If the Likud emerges from the election with most seats and Netanyahu forms a government, he will certainly try to claim immunity as long as he is in office even if he is convicted of corruption, fraud and breach of trust. If he refuses to resign, the Supreme Court could decide on his fate.

Capitalising on the pending indictments, Gantz called on Netanyahu to resign and pledged not to form a coalition with him. The Labour party also messaged hundreds of thousands of Israelis to remind them that in 2009, Netanyahu demanded then Prime Minister Ehud Olmert, also of the Likud, to step down over accusations of corruption. He did and spent 18 months in prison.

Netanyahu has ignored both Gantz and Labour and carried on campaigning in the reasonable expectation that he could, once again, be prime minister. His intimate — familial — connection with Trump has strong appeal in Israel where he is far more popular than in the US. The connection is familial because Netanyahu is a close friend of Charles Kushner, father of Trump’s son-in-law Jared Kushner. While visiting the US in earlier days, Netanyahu would stay at the Kushner home in New Jersey and sleep in Jared’s bed.

The Likud has put up huge campaign portraits of the two men side by side. Due to this tie, Netanyahu is claiming a share of responsibility for Trump’s recognition of Jerusalem as Israel’s capital, US defunding of all assistance to the Palestinians, and recognition of Israel’s sovereignty over the occupied Syrian Golan Heights.

Netanyahu was born in Tel Aviv in 1949, grew up in the US where his father held an academic post, and at 18 returned to Israel after the 1967 war to serve as a commando in the armed forces. Before launching a political career in the Likud, he attended university in the US. He became a party leader in 1993 and won the 1996 election. He is currently completing his fourth term at the top.

His chief rival, General Benny Gantz, born in 1959, was army chief from 2011-15. He was in command during Israel’s murderous 2014 onslaught on Gaza. Although facing a Palestinian lawsuit over that war, Gantz benefits from being “anyone but” Netanyahu. While serving officer, Gantz earned BA and MA degrees from Israeli universities. After leaving active duty, he opened a technology business which failed due to US sanctions on Russian investors. In December last year Gantz launched the Israel Resilience Party and in January this year formed an electoral alliance with former defence minister Moshe Ya’alon and other “centrist” figures although Israel’s political centre has disappeared under the avalanche of rightist pressures and policies.

The Labour party has long been right-wing, leaving Meretz as the sole leftist party, which currently has five Knesset seats and may secure only four in the coming election. Although a Zionist party adopting positions which cannot be conflated with those of Arab parties, Meretz remains the only Israeli party which could be prepared to try to curb the excesses of the rightists who have taken control of the country and its US supporters.