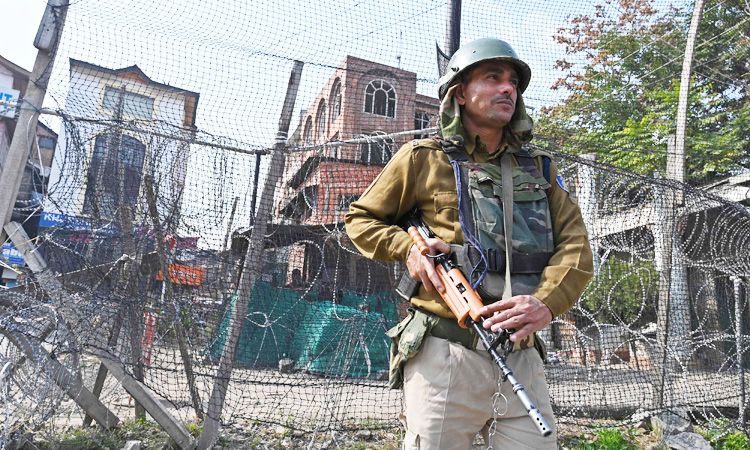 An Indian paramilitary trooper stands guard on a street during a lockdown in Srinagar. AFP

India is set to hold local body council elections in Jammu and Kashmir. In total 26,629 village-council heads will vote to elect 310 out of 316 members.

On August 5, the government stripped Jammu and Kashmir of special status under Article 370 and split the state into two Union Territories. On October 31, the government decision will come into force. Village council elections are being conducted on Thursday in Indian-controlled Kashmir.

The absence of mainstream local politicians leaves worry the polls will install puppets of the central Hindu-nationalist government that revoked the disputed region’s semi-autonomous status in early August.

The council elections have been controversial for various reasons. First, they take place amid shutdowns to protest against the government decision and an internet blackout.

But the elections are being boycotted by most political parties, including those whose leaders had been sympathetic to the central government but are now in makeshift jails or under house arrest. India’s main opposition Congress party is boycotting as well, possibly allowing a clean sweep for Prime Minister Narendra Modi’s Bharatiya Janata Party.

The BJP has a very small base in the Kashmir valley, the heart of a decades-old anti-India insurgency in the region of about 12 million people. 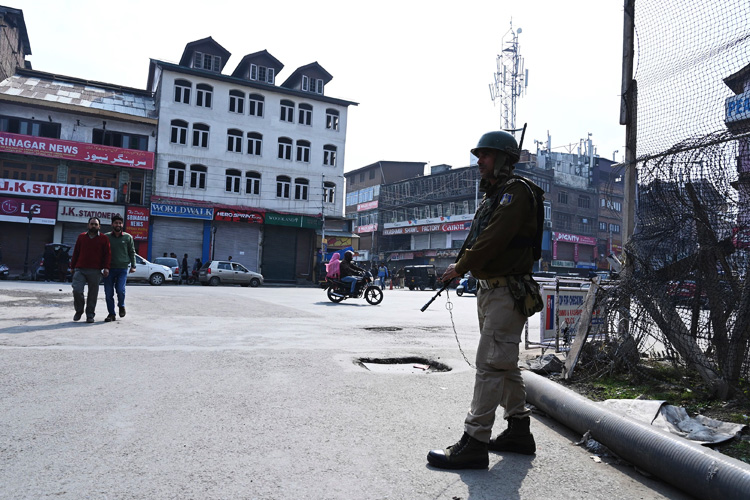 An Indian paramilitary soldier stands guard on a street during a lockdown in Srinagar Wednesday.

Predominantly Muslim Kashmir is split between India and Pakistan, with both countries claiming the region in its entirety. Insurgents in the Indian-controlled portion demand independence or a merger with Pakistan.

In the elections, members of the more than 300 Block Development Councils formed last year will choose chairs. Each block comprises a cluster of villages across Jammu and Kashmir, a state that India’s Parliament downgraded in August to a federal territory, a change that takes effect on Oct.31.

About 1,000 people are running. In at least 25 councils, candidates are running unopposed.

Most of the candidates and thousands of council members, the electorate for Thursday’s vote, have lived for months in hotels in Srinagar, the region’s main city, over security concerns. In the past, militants fighting against Indian rule have targeted poll contestants. 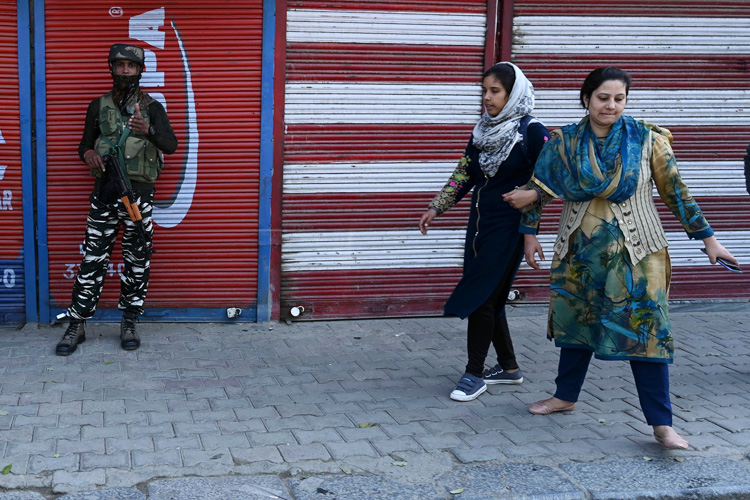 Kashmiri women walk past next to closed shops during a lockdown in Srinagar on Wednesday.

Officials tout the councils, which will be responsible for allocating government funds, as grassroots democracy.

But observers say the system lacks legitimacy in Kashmir.

Political scientist Dr. Noor Ahmed Baba said the exercise, at least in theory, is an “important layer of democracy” but questioned conducting it in “extremely difficult and abnormal times.”

“When most people are bothered about their basic freedoms and livelihood, facing crushing restrictions, you’ve these elections,” Baba said. “This is more like completing a formality. It looks more like an artificial exercise.” 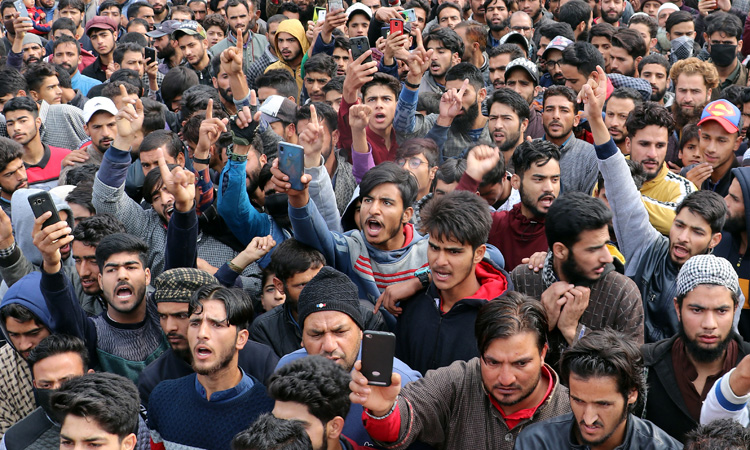 Kashmiris shout slogans as they attend the funeral of Hameed Lelhari after he was killed in a gun battle with Indian soldiers.

The council elections held last December were boycotted by separatist leaders and armed rebel groups who challenge India’s sovereignty over Kashmir. Both rebels and separatists in the past have called elections in Kashmir an illegitimate exercise under military occupation.

About 60% of the 21,208 village council seats in the Kashmir valley are vacant because no one ran for them. The winners of another 30% were elected unopposed.

Police chief Dilbagh Singh said authorities have made security arrangements for the Thursday’s elections to be conducted smoothly. 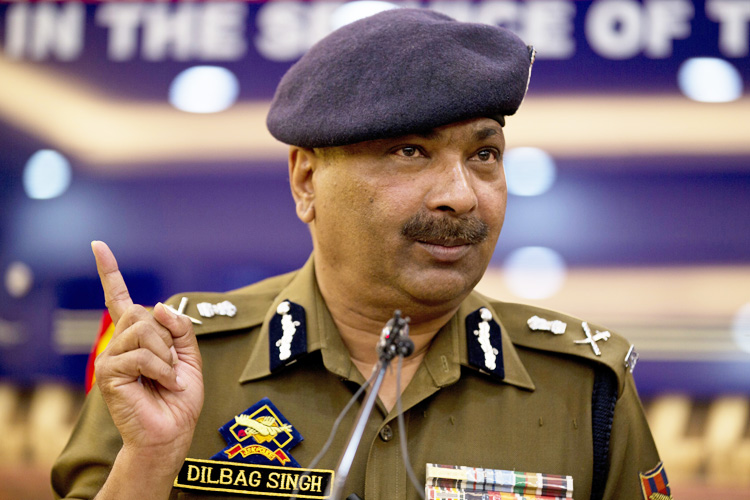 Authorities have since eased some restrictions, lifting roadblocks and restoring landlines and some mobile phones. They have encouraged students to return to school and businesses to reopen, but Kashmiris have largely stayed home, in defiance or fear amid threats of violence.

The Modi government says removing a constitutional provision that had given Kashmir some measure of autonomy since independence from British rule in 1947 was necessary to give rights afforded other Indian citizens, to usher in greater economic development and do away with the sense of separateness that BJP leaders say has cultivated the separatist movement.

But as the crackdown continues, Kashmiris have quietly refused to resume their normal lives, confounding India at their own economic expense.

Shops have adopted new, limited hours of operation in the early morning and evening. Taxi drivers haven’t returned to the roads.

Shailendra Kumar, the chief electoral officer, said the government had planned for the polls in June.

Conducting the polls amid an ongoing crackdown “could be a discussion point,” Kumar said, “but should we delay it for another year? I don’t think so. This is a clear-cut system governed by rules, and rules don’t ask me to gauge mood and sentiments but to facilitate the process.”

Some Kashmiris view the polls cynically, as a move to create a new political elite loyal to the Modi government that found its plans widely rejected in the region.

“Every election here is meant to pull wool over eyes of Kashmiris and create a smoke screen that everything is fine here,” said Mohammed Abdullah, a college teacher. “It’s also meant to convey to the world that India is a democracy and Kashmir is part of this vibrant democracy.”

To Abdullah and other Kashmiris still reeling from the changes in the region, Thursday’s polls suggest the opposite.