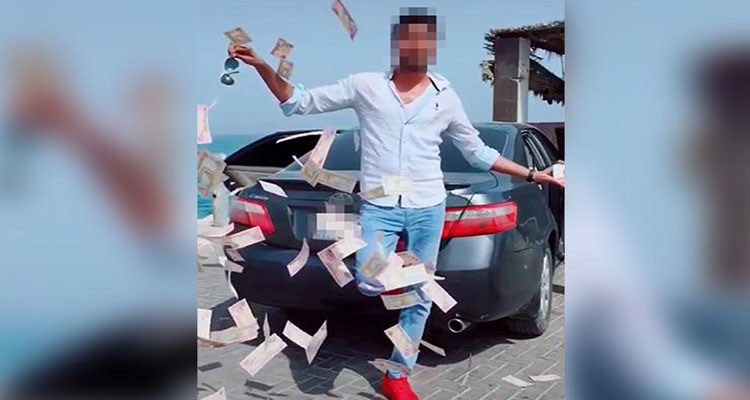 A video grab of the ‘money thrower’ in action.

The Dubai Police arrested an Asian man in his 30s, over posting a video on social media showing himself scattering money into air in a street in Dubai. In an uncivilized and bad act, the man appeared boasting before the public by throwing the UAE banknotes into air ignoring all values and rules.

Colonel Faisal Al Qasim, Director of Security Media at Dubai Police, said that the man was arrested after being identified by the Cyber Crimes Department of the Criminal Investigation Department.

On questioning the suspect, he confessed to the crime as seen in the video, justifying that he sought to gain popularity on social media through gaining the largest possible number of views and likes. Col. Al Qasim said, “Users of social media must respect the laws, customs, values, traditions and symbols of the country.”

He pointed out that the public and specifically users of social media must be aware of the laws of the country related to combating cybercrimes so that they do not find themselves accountable before the law because of any illegal behaviour.

Article 29 of the New Cyber Crime Law also stipulates penalties including imprisonment and a fine not exceeding Dhs1,000,000 for any person who may create or run an electronic site or any information technology means, to deride or to damage the reputation or the stature of the state or any of its institutions, its President, the Vice President, any of the Rulers of the emirates, their Crown Princes, the Deputy Rulers, the national flag, the national anthem, the emblem of the state or any of its symbols.

A recent study revealed that about 70 per cent of students in the UAE use social media five or more hours daily and have been bullied online at least once. At least, 56 per cent respondent admitted to attempting to quit social media in the past 12 months but failed to do so, revealed a wide-ranging study into the impact of social media usage on youth in the region.