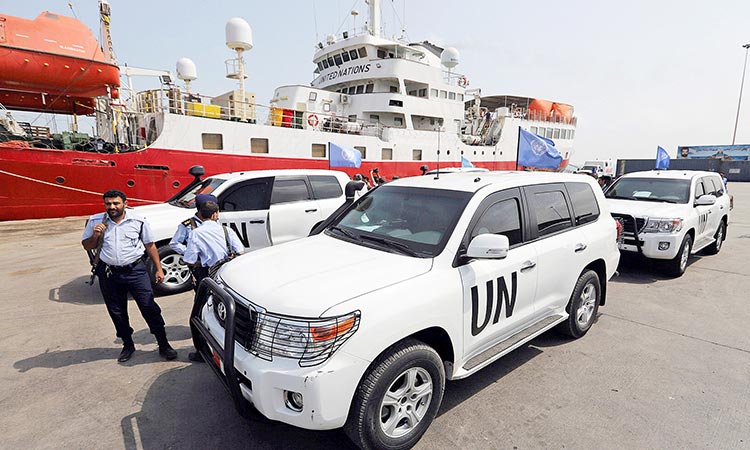 UN vehicles on their way to Saleef port are seen at the Red Sea port of Hodeidah on Saturday. Reuters

A minister in the Yemeni government backed by Saudi Arabia dismissed on Saturday the Houthi movement’s pullout from the Red Sea port city of Hodeidah as a “show” meant to “disinform the international community.”

“What happened today is a flagrant show, a group of (Houthi) militiamen left (the city) and they were replaced by others wearing coast guard police uniforms,” Information Minister Muammar Al Iryani told media.

“The Houthis are staging a new ploy by handing over the ports of Hodeidah, Saleef and Ras Issa to themselves without any monitoring by the United Nations and the government side,” provincial governor Al Hasan Taher told reporters.

The rebels and the United Nations have said the Houthis were to withdraw unilaterally from the three aid ports starting on Saturday, in the first practical implementation of a ceasefire deal struck in Sweden in December.

Yemen’s accusation came after the Houthi rebels, who have been in control of the ports since 2014, said they had carried out their obligations.

Sources close to the Iran-aligned Houthis told media that the ports were handed over to coast guard personnel who were in charge before the rebels took over almost five years ago.

There was no independent confirmation of a rebel withdrawal, and a UN observer mission in the city of Hodeidah remained cautious in its initial assessment.

“The UN has started monitoring this unilateral step,” a source told reporters.

“The UN hopes soon to be in a position to report to the Security Council on actual movements on the ground.”

The council is due to hear a briefing on Hodeidah on Wednesday.

The Hodeidah governor said the unilateral step of the Houthis contradicted the terms of the ceasefire deal and accused the UN envoy to Yemen, Martin Griffiths, of collaborating with the rebels.

“Martin Griffiths wants to achieve victory even if the Houthis hand over (the ports) to themselves,” the government-appointed official said.

“This is totally rejected by us, and the agreement must be implemented in full, especially with regards to the identity of the troops that will take over from the Houthis,” Taher said.

It was not clear if Griffiths had secured agreement between the two sides over the main sticking point regarding which local authorities would control the ports and city under UN supervision after both sides withdraw.

The coalition had disputed an earlier unilateral withdrawal by the Houthis from Hodeidah port in December, saying they had handed it over to coast guard members loyal to the group.

A UN source told media on Saturday that the UN Redeployment Coordination Committee (RCC) would announce its assessment of the Houthi redeployment next week.

The UN RCC has said the Houthis would make an “initial unilateral redeployment” from the ports between May 11 and May 14.

It said the redeployment would enable the United Nations to take a leading role in supporting the local Red Sea Ports Corporation in managing the ports and enhance UN checks on cargoes. It would also allow humanitarian corridors to be reopened.

There has been no comment so far from the Saudi-led military coalition that has massed forces outside Houthi-held Hodeidah, which handles the bulk of Yemen’s imports and aid supplies.

Hodeidah became the focus of the war last year when the coalition twice tried to seize its port to cut off the main supply line of the Houthis, whom they accuse of smuggling Iranian weapons, including missiles that have targeted Saudi cities.

The peace deal had stalled since January amid deep mistrust among the parties in a conflict that has killed tens of thousands and pushed the poorest Arabian Peninsula nation to the brink of famine.

Under the first phase, the Houthis would pull back five km from the ports over the next four days. Coalition forces, currently massed four km from Hodeidah port on the edges of the city, would retreat one km from “Kilo 8” and Saleh districts. 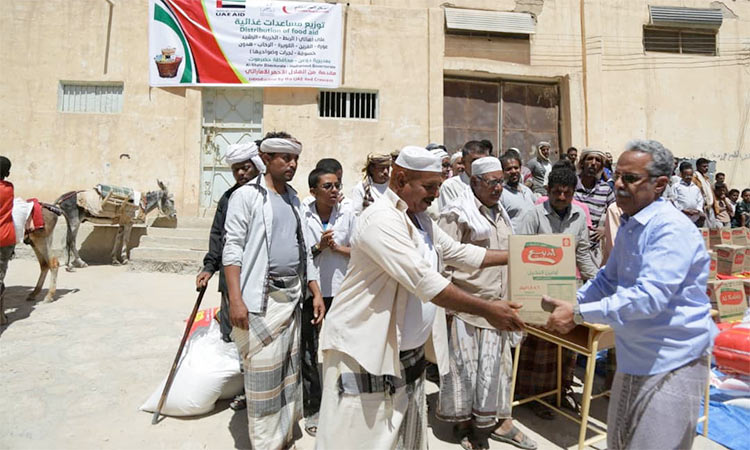