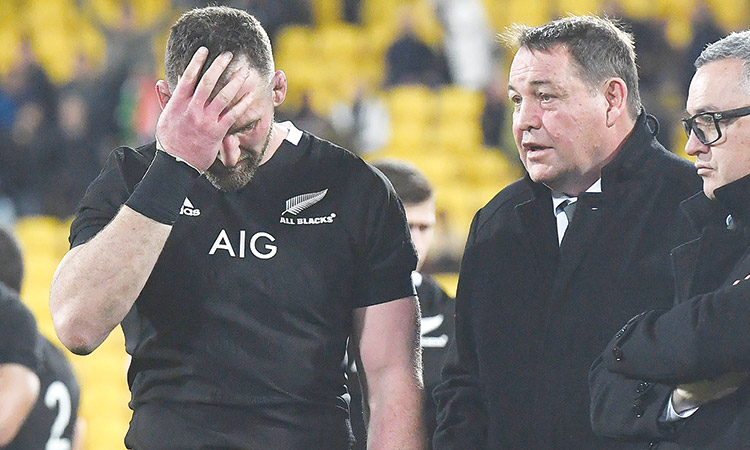 The Bledisloe Cup is the second most important trophy for New Zealand after the Rugby World Cup, avers Steve Hansen. File / Reuters

The world champion All Blacks play their final match of the abridged Rugby Championship against the Wallabies at Perth Stadium on Aug. 10, which also doubles as the first clash of the Bledisloe Cup, the annual series contested between the trans-Tasman nations.

The second Bledisloe Cup match is in Auckland on Aug. 17.

Scott returns after being sidelined for a month with a broken finger, replacing former World Player of the Year Brodie Retallick, who dislocated his shoulder in the 16-16 draw against South Africa in Wellington last Saturday.

Along with Frizell, Asafo Aumua, Josh Ioane, Dalton Papali’i and Karl Tu’inukuafe have been cut, and the five are now unlikely to feature at the World Cup unless there are injuries.

“They can jump into the mix, but it’s obviously getting harder, isn’t it?” Hansen told reporters on Wednesday.

“Because we are trying to narrow it down. We have got two big games coming up and then we will reflect and get (the squad) down to 31.”

Frizell’s omission, after he started against South Africa in Wellington last Saturday, means Vaea Fifita remains in the race to be the starting blindside flanker in the absence of Liam Squire.

Rookie loose forward Luke Jacobson has retained his place in after making his Test debut off the bench in the opening Rugby Championship win over Argentina in Buenos Aires.

Inside centre Sonny Bill Williams, who will turn 34 on Saturday and has struggled with injuries over the past two seasons, has been retained but will be rested for the first Wallabies match.

He emerged unscathed from his return to the Test arena against the Springboks but will nonetheless head back to provincial rugby with Counties Manukau for the next two weekends before returning for the Auckland clash.

“We’ve got a lot of respect for Sonny’s playing ability, obviously,” Hansen said.

“We know he can play at this level — the unfortunate thing is he hasn’t played much and we wanted to see him on Saturday be able to cope with the rigors of Test football which he did so that’s a big tick.”

Australia, who defeated Argentina 16-10 in Brisbane last week, meet the All Blacks in Western Australia state capital Perth for the first time.

“The Bledisloe Cup is the second most important trophy for us, after the Rugby World Cup, and we’re really looking forward to the next two Tests coming up,” said Hansen.

The defending champion All Blacks are second in the Rugby Championship standings behind South Africa ahead of the final round.

Victory in Perth will see the All Blacks retain the southern hemisphere trophy for a fourth consecutive season if the Springboks lose their final match away to Argentina.

The Wallabies have not won the Bledisloe since 2002 and All Blacks coach Hansen said the New Zealanders saw retaining the trophy as second only to defending the World Cup in their priorities for 2019.

“We know that the Wallabies will be confident after their win over Argentina and desperate to win this first match, so we’re looking forward to getting to Perth and getting into our Test preparation.”

Fly-half Ioane was not named in the squad but has been invited to join the All Blacks’ training camp to further his development.