Wallabies look to carry on momentum against All Blacks - GulfToday

Wallabies look to carry on momentum against All Blacks 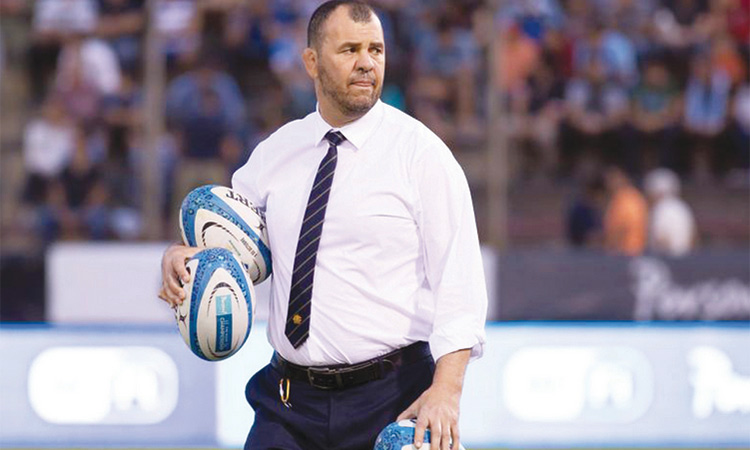 Victory over Argentina has boosted Michael Cheika’s confidence that Australia would be competitive against New Zealand in upcoming clashes.

Michael Cheika has never been one to shirk a challenge and the Wallabies coach barely had time to digest a first win of the season before turning to a pretty imposing one — back-to-back Tests against the world champion All Blacks.

Australia have faced New Zealand 12 times under Cheika going into their Aug. 10 clash in Perth, winning two and losing 10 of those contests, including the 34-17 defeat in the 2015 Rugby World Cup final.

Since that Twickenham title decider, the Wallabies have rarely hit the same heights and in Saturday’s 16-10 win over Argentina, there were only flashes of the sort of rugby they would need to play to repeat the feat later this year.

There were, though, enough improvements — particularly in defence and the scrum — from the heavy loss to South Africa in their Rugby Championship opener to offer Cheika some confidence his side would be competitive against New Zealand.

“We’re prepared to go up another, I don’t know how many levels it might take, but whatever it is, it’s about whether we want to take a step up and whether we will take a step up to go and compete there,” Cheika told reporters after the match in Brisbane.

Australia’s final match in the truncated Rugby Championship in Perth will be followed by the second Bledisloe Cup Test against the All Blacks in Auckland the following week.

However imposing that task might be, the reality of World Cup rugby means Australia might not have to face their trans-Tasman Sea rivals at all in Japan, however deep they go into the tournament.

The Wallabies have built a reputation for peaking when it matters over the eight previous editions of rugby’s showpiece event, two of which they have won.

Cheika said there were signs that the squad was starting to develop the sort of spirit and tactical coherence that would help them fire in their unlikely quest for a third world title.

“What I’m seeing in the way that the guys are going about their business is you had a lot of guys play their first game tonight and saw that they were very committed in what they brought,” he added.

“I think anyone that comes in ... they’ll be ready to go and try to build on that momentum. We know how difficult that task will be, but I really believe in these players.

“Just the environment they’re creating at the moment amongst themselves - nothing to do with us - will help them down the line to achieve bigger things than they thought they could earlier on in the year.”

Meanwhile, Sonny Bill Williams will not travel with the All Blacks for their final Rugby Championship match coach Steve Hansen said on Sunday.

The 33-year-old Williams will instead play for provincial side Counties Manukau and be brought back into the All Blacks squad for their Bledisloe Cup encounter with the Wallabies in Auckland the following week.

“He’s going to play a couple of games over the next couple of weeks, which will be good,” Hansen told reporters.

“He’ll be available for Perth, but we’re not going to take him. We’re going to get him to play two, or three ... as many games as we can get in between there and Auckland.”

The inside centre has suffered a string of injury over the last two years and his place in Hansen’s World Cup squad was in jeopardy if he could not prove his match fitness during the southern hemisphere competition.

He played 59 minutes of the All Blacks 16-16 draw with South Africa in Wellington on Saturday before being replaced by Anton Lienert-Brown.

While he did not make a characteristic line break or offload in the tackle he often drew three defenders, which created mismatches outside him.

Most importantly for Hansen, he came through the game unscathed without any recurrence of his hamstring injury that had kept him out of last week’s test against Argentina.

“The key thing we asked him to do was stay there and stay injury free. He did that,” Hansen said after the match.

“He hasn’t played a lot of rugby and was rusty so we won’t get too judgmental about his rugby performance, the fact was his body held together that was encouraging.”

Hansen is due to reduce his 39-man squad to 34 players on Wednesday for the two clashes with Australia. The absence of twice World Cup winner Williams could give Ngani Laumape a final opportunity to press his World Cup credentials, with Ryan Crotty due to have scan on a broken thumb on Monday.