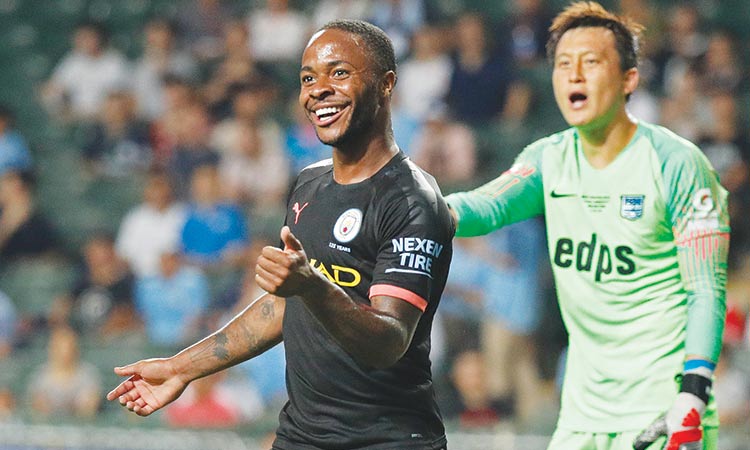 Pep Guardiola urged Leroy Sane to decide if he wants to stay at Manchester City or go to Bayern Munich as the unsettled star scored twice in a 6-1 rout of Hong Kong’s Kitchee.

Sane, the subject of persistent interest from the Bundesliga giants, underlined his class with a goal in each half, one rifled left-footed and one from a tight angle after a sharp turn in the box.

“He’s a guy who I appreciate a lot, I like him a lot. I think he has incredible gap to develop, incredible in terms of being connected in the game,” Guardiola said.

“We want him, we want him to stay. That’s the reason why for more than one year he has an offer waiting to talk with his agent to extend the contract.

“Beyond that it’s not in my hands, he has to decide. If he wants to stay and reach an agreement it’s good, if he wants to leave we can decide what he can do. Hopefully he stays.”

Earlier, Sane scored twice, Raheem Sterling got one and set up two more and teenagers Nabil Touaizi and Iker Pozo were also on the scoresheet as Pep Guardiola’s City outclassed the Hong Kong league side.

In the 21st minute of each half, marking an attack by a stick-wielding mob on July 21, fans struck up “Do You Hear the People Sing”, the Les Miserables song which has been adopted as a protest anthem, followed by loud chants of “Free Hong Kong!” One banner unfurled among the 20,926-strong Hong Kong Stadium crowd said: “No China extradition, HK = police state, please save HK!!” It follows weeks of protests in the semi-autonomous territory sparked by a government bid, since shelved, to allow extradition to mainland China for certain offences.

The protests, which have morphed into demonstrations for democratic reform and a halt to sliding freedoms, have seen sporadic clashes including Sunday’s attack by suspected triad gangsters which left dozens wounded.

On a sweltering evening, a sharp-looking Sterling rattled the bar in just the second minute and then set up the first goal for David Villa, who lifted the ball calmly over the Kitchee ‘keeper.

England striker Sterling made it 3-0 with a neat finish just before the break before Sane grabbed his second with a turn and shot from a tight angle after Kevin De Bruyne’s thumping strike. Spanish teenager Touaizi came on to score City’s fifth 10 minutes from time but the biggest cheer of the night was for Kitchee’s Law Tsz-chun, who grabbed a consolation goal for the Hong Kong side.

Meanwhile,  Matthijs de Ligt scored an own goal on his first start before veteran goalkeeper Gianluigi Buffon rescued Juventus in a 4-3 penalty shootout win over Inter Milan on Wednesday.

It may only have been a friendly between the Italian arch rivals, but tempers threatened to boil over at times, especially in a feisty second half in stifling Nanjing.

The game ended 1-1 after 90 minutes, with Cristiano Ronaldo drawing Juventus level with a deflected second-half free-kick following De Ligt’s own goal on 10 minutes.

Then the 41-year-old Buffon -- more than twice De Ligt’s age -- sprang to the fore in the shootout, making a triumphant return to the Serie A champions after a year with Paris Saint-Germain. 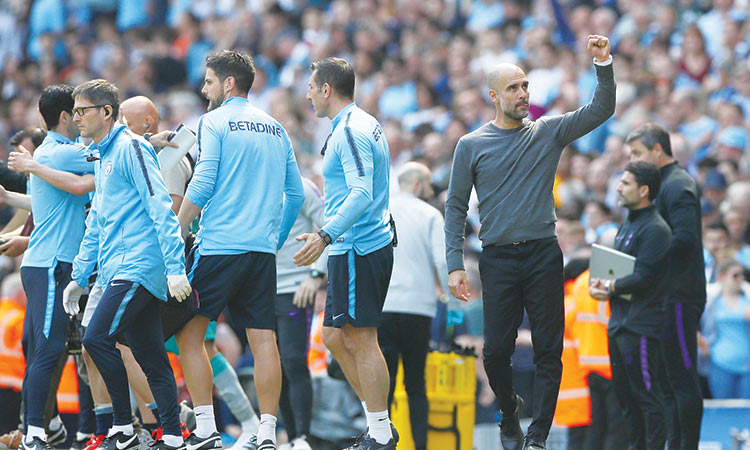 Fresh after avenging his side’s Champions League defeat against Tottenham, Pep Guardiola will target the quadruple again next season with Manchester City despite the disappointment of this week’s Champions League exit against Mauricio Pochettino’s side.