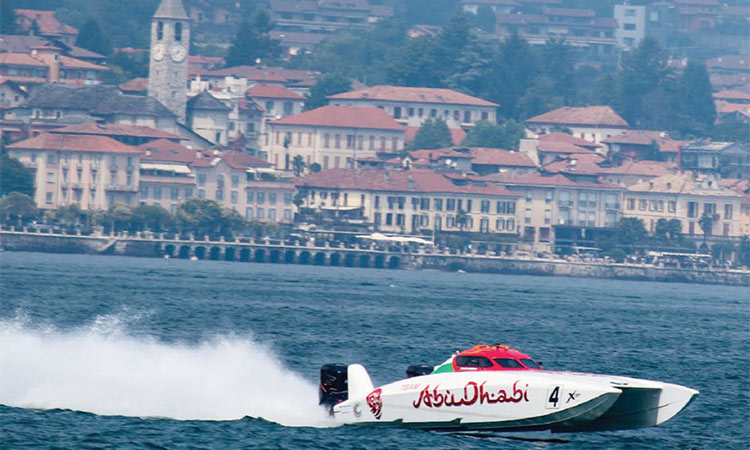 The 2019 XCAT World Championship is only a few days old, but already Team Abu Dhabi’s Shaun Torrente and Faleh Al Mansoori have taken a grip on the series.

The defending world champions went into the Italian Grand Prix knowing how important it would be to make a flying start to the championship, and they produced a stunning performance on Lake Maggiore in Stresa.

Back-to-back race victories underlined the determination of the American and Emirati combination to hold on to their XCAT crown, and they will carry a huge advantage in confidence into the next round of the championship.

Just where that will happen is not clear at the moment, with three of six rounds provisionally included in the XCAT series still to be confirmed in China, starting with the first in September.

Torrente and Mansoori will be ready for anything the season, or their title rivals, can throw at them up to the final round in Dubai from Dec.12-14.

In race one they held off a big challenge from Tom Barry-Cotter and Ross Willaton after the Australians had secured the season’s first pole position in Maritimo.

Race two saw them win by a margin of 11.76 secs from the Dubai Police combination of Arif Al Zaffain and Nadir Bin Hendi, once again powering their way into the lead from the start and never looking back.

There were strong signs, however, that they can achieve much better than their fourth and seventh places finishes in Italy, particularly when they held second position towards the end of race two before falling back.

The focus for Team Abu Dhabi switches back to the UIM F2 Championship this weekend, with Rashed Al Qemzi and Rashed lining up for the Grand Prix of Norway in Tonsberg.

Qemzi leads the title race after launching his bid to regain the F2 crown with victory in the Lithuania Grand Prix for the second time in three years. Tayer will be looking for better fortunes in Norway after being completely out of luck in Lithuania, recovering from a crash in qualifying to start the race but then being forced out when his boat was rammed on a turn.

Torrente, who leads the F1H20 series, is also part of the Abu Dhabi team at the World Endurance Championships.

A sixth-place finish was enough to ensure American Torrente, Emiratis Qemzi and Rashed and Italian Tullio in Abu Dhabi 35 securing the world endurance crown following their win 24 hours earlier and success two months ago in the 24 Hours of Rouen in France.

The all-Emirati crew of Majid Al Mansouri, Mohammad Al Muhairbi, Rashid Al Rumaithi and Faleh Al Mansouri in Abu Dhabi 36, who recorded a commanding victory in the second of two back-to-back six-hour races to finish runners up in the series.

Having shadowed their teammates in second place virtually from the start, Abu Dhabi 36 suddenly found themselves with a commanding lead and ultimately cruised to victory by 19 laps from the Navikart Soliodaires French crew of Sebastien Lemoine, Olivier Betin and Stephane Lemoine Russians Konstantin Ustinov and Dimitry Vandyshev and Lithuania’s Edgaras Riabko in Nollet 2 were third another five laps behind.