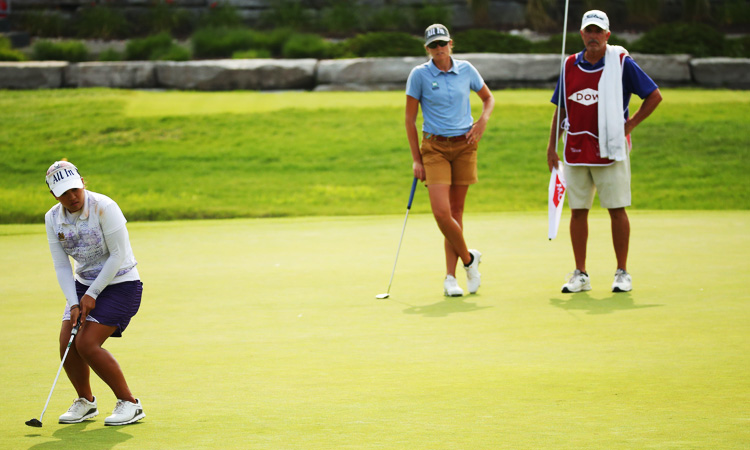 Jasmine reacts to a birdie on the 18th green with her teammate Clanton looking on during round three of the Dow Great Lakes Bay Invitational at Midland Country Club on Friday in Midland. AFP

Cydney Clanton and Jasmine Suwannapura fired a seven-under par 63 in the alternate-shot third round of the LPGA’s team event in Michigan on Friday to seize a five-shot lead.

America’s Clanton and Thai teammate Jasmine, also known as Thidapa, had eight birdies, shrugging off sweltering conditions to put themself in position to become the first team to lift a trophy at the Dow Great Lakes Bay Invitational — the first official team event ever on the LPGA tour.

“Today I think what we did was quite impressive just with our ball striking in general,” Clanton said. “Jasmine’s putting’s on point. I think you’ve just got to look at it as it’s just another opportunity to play and the more that you can think of the fact that it’s just another day on the golf course, we’re going to go out and try to do what we’ve been doing, the better it’s going to be.”

Jasmine, who won her first LPGA title at the 2018 Marathon Classic, said the alternate-shot format suited her and Clanton.

“I think because we (were) pretty chill — like you hit a bad shot, like OK I’ll fix it, don’t worry.

“So everybody was kind of like relaxing (during) the game today so the result (was) pretty good.”

Saturday’s final round sees a switch to four-ball, where both players on the team will play through the hole and the team will take the best score of the two players.

On 16-under 194, Clanton and Jasmine were five in front of four teams.

That included Thai sisters Moriya and Ariya Jutanugarn, who combined for a 64.

The Chinese duo of Feng Simin and Liu Ruixin and the South Korean team of Choi Na-yeon and Jenny Shin both posted 67s while Americans Paul Creamer and Morgan Pressel carded a 69 to share second on 199.

The Jutanugarn sisters started the day five shots off the lead and tied for 23rd.

They played without a bogey, and Ariya said she was felt more comfortable in the alternate-shot format than she did in Wednesday’s first round.

“I felt like in the first round, I don’t want to miss any shot because I don’t want my sister to have like tough shot and I was kind of worried and scared,” Ariya said. “Today we already make the cut and nothing to lose, so we keep playing golf.”