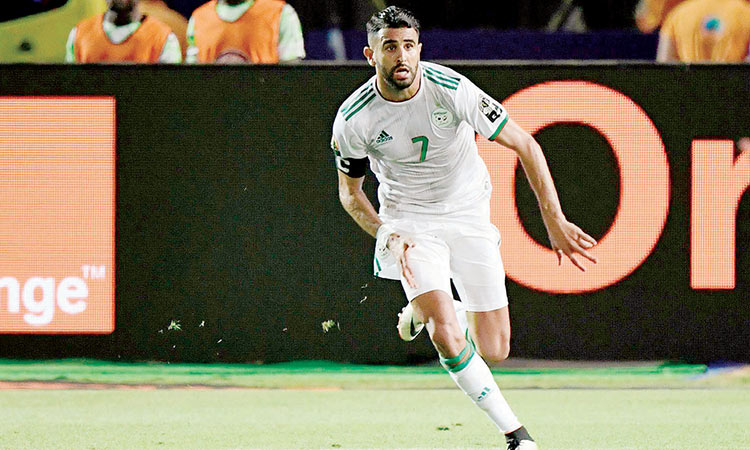 Riyad Mahrez and Sadio Mane will renew their Premier League rivalry for a second time in Egypt, with Africa Cup of Nations immortality awaiting the victor of Friday’s final between Algeria and Senegal.

Algerian star Mahrez was part of the Manchester City team that edged out Mane’s Liverpool for the English title last season, grabbing a pivotal goal on the final day of the campaign.

Liverpool standout Mane, however, is attempting to fulfil his “wildest dream” as one of just a handful of Africans to win both the UEFA Champions League and Cup of Nations.

For the marquee name in a Senegalese side ranked top of the continent, and a surprising 46 places above Algeria, the ride to the final for Mane and the Teranga Lions has encountered its share of roadbumps.

Two missed Mane spot-kicks, a group stage loss to Algeria, and the loss of goalkeeper Edouard Mendy to a broken finger have tested Senegal’s resolve in their quest for the Holy Grail of African football.

Coach Aliou Cisse is on a mission for personal redemption. He was the skipper of the side beaten on penalties in the 2002 final, with his missed kick handing the title to Cameroon.

“Having lost that final, I still have it on my mind,” said former Paris Saint-Germain and Birmingham City midfielder Cisse.

“What motivated me to become a coach was to be able to take Senegal to the final. My players told me they would do better than my generation.”

A maiden Cup of Nations for his country is a prize for which Mane readily admitted he would trade in last month’s Champions League title.

“I’m ready to even swap a Champions League for a Cup of Nations. Going to Dakar with the trophy would be extraordinary. It would be my wildest dream,” Mane told France Football ahead of the competition.

Standing in the way, however, is an Algerian outfit that has undergone a remarkable transformation since the arrival of Djamel Belmadi as coach a year ago.

The Desert Foxes failed miserably in World Cup qualifying, but the steely Belmadi has healed divisions in the squad to lead them to the brink of a first Cup of Nations triumph since 1990.

“To the Algerian people, I want to say I’m not a politician, not a miracle worker or a wizard, but that we will fight like we have fought to this point,” Belmadi said after the semi-final win over Nigeria.

Algeria are the leading scorers in Egypt with 12 goals, including Mahrez’s spectacular last-gasp free-kick against Nigeria, and haven’t trailed at all in the tournament.

“Algeria are so well organised, so compact, so ‘Guardiolaesque’ in the way they recover the ball,” opined experienced international coach Claude Le Roy. “Perhaps it is the influence of Mahrez.”

The Algeria captain has been in fine form for his country here, brimming with confidence after helping City to the domestic treble.

“We are very happy to be in the final of the Africa Cup of Nations because it is something very special,” said Mahrez.

“It was our goal to do it for the people and for our families. We know they are behind us all the way. It’s my dream to win the Cup of Nations.”

“It’s going to be another battle against Senegal,” he added. “We’ve been very good in this competition. The (Nigeria) match has given us more confidence for the final and we’re capable of winning it.”

Their hopes will boosted by the absence of Senegal’s defensive rock Kalidou Koulibaly, whose yellow card in the semi-final victory over Tunisia cruelly ruled the Napoli star out of the final.

“It hurts to not be able to play. But I will be beside my brothers to write history,” tweeted Koulibaly, the cornerstone of a defence breached just once so far.