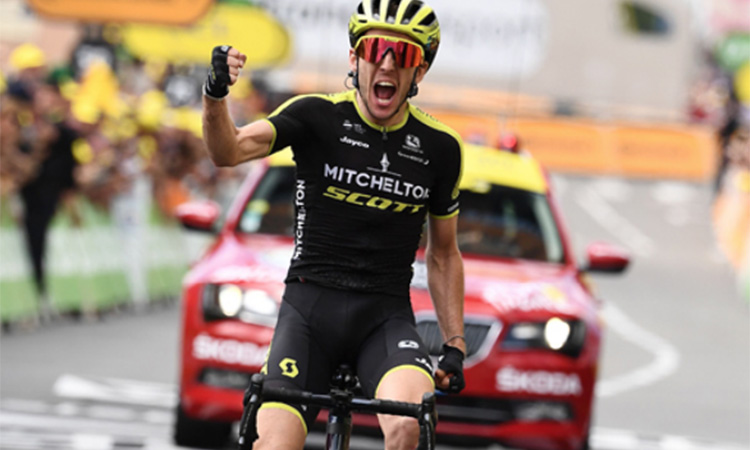 Great Britain’s Simon Yates celebrates after crossing the finish line of the twelfth stage of the Tour de France on Thursday. Agence France-Presse

Britain’s Simon Yates won stage 12 of the Tour de France on Thursday, beating two other survivors of a mass breakaway in the Pyrenees. Defending champion Geraint Thomas and current overall leader Julian Alaphilippe finished the slog over two tough climbs together as any anticipated top 10 shake-up failed to materialise.

Simon, brother of Mitchelton Scott captain Adam Yates, is the Vuelta a Espana champion. He also led the Giro d’Italia earlier in 2018 before a meltdown under pressure from eventual champion Chris Froome.

“I’m here to help Adam, he’s doing well and is ready,” he said of his twin who is seventh in the overall and a potential Tour winner.

“But I’m really happy with this win, I got the green light to go from the team and timed it well.

Simon Yates is over an hour adrift in the overall standings, but punched the air in joy after adding a Tour de France stage to victories in the Vuelta and Giro.

Yates came over the final climb with Bora’s Gregor Muehlberger of Austria and Astana man Pello Bilbao, but launched a long range sprint for the line to win by a clear bike length.

Cameras on the distant peloton showed Adam Yates, connected by radio to his team car, smiling.

Overall leader Alaphilippe led the peloton south the pink-bricked city of Toulouse for stage 12’s two mist shrouded Pyrenean peaks after vowing to hold on to the yellow jersey.

The two major obstacles on the road to the rural outpost of Bagneres-de-Bigorre were Tour classic: the 13.2km ascent of the Col de Peyresourde at an average of 7 percent followed by a steeper climb to Hourquette d’Ancizan. The day finished with a downhill charge to the finish line.

Peter Sagan won the intermediate sprint at the foot of the first climb, the burly fast-man having gamely joining the more slightly built riders on the escape, earning an increase in his green jersey points lead the hard way.

“I wanted to be in the breakaway, the sprint was my win,” said the 30-year-old. Thomas traditionally does well in the time trial, the next major test on Friday.

“Geraint will put time into all his key rivals on the time trial,” the 83-year-old Raymond Poulidor, who finished on the Tour podium eight times without winning and is beloved to the French, told AFP of Friday’s 27.2km individual time-trial around Pau.

Alaphilippe has again vowed to defend his overall lead at Pau.

“I have a lead of 1min 12sec, and I’m real looking forwards to pushing myself to a new limit,” said the 27-year-old soldier, who Thomas has described as ‘the darling of France’.

Meanwhile, Chris Froome was upgraded from second place and officially declared winner of the 2011 Vuelta a Espana after champion Juan Jose Cobo’s doping ban was confirmed.

Froome, unable to take part in this year’s Tour de France because of a crash last month, gains his second Vuelta title after victory in 2017 and his seventh career Grand Tour win following four Tour de France victories and his 2018 Tour of Italy triumph.

The International Cycling Union (UCI) said Cabos had failed to appeal against a three-year ban imposed on him retrospectively earlier this year.

“The appeal period has expired so the three-year suspension of Juan Jose Cobo Acebo is in consequence confirmed,” the UCI said in a statement.

On June 13 the Spaniard was found guilty of an anti-doping violation which involved the use of a banned substance in 2009 and 2011 based on abnormal results in his biological passport, the UCI said.

“Better late that never!” tweeted Froome whose retrospective promotion to first place makes him the first British rider to win one of the Grand Tours.

Bradley Wiggins, who held the honour until now, won his first Grand Tour, the Tour de France, in 2012. News of Cobo’s violation broke a day after Froome, 34, was involved in a horror crash during practice for the Criterium du Dauphine on June 12.