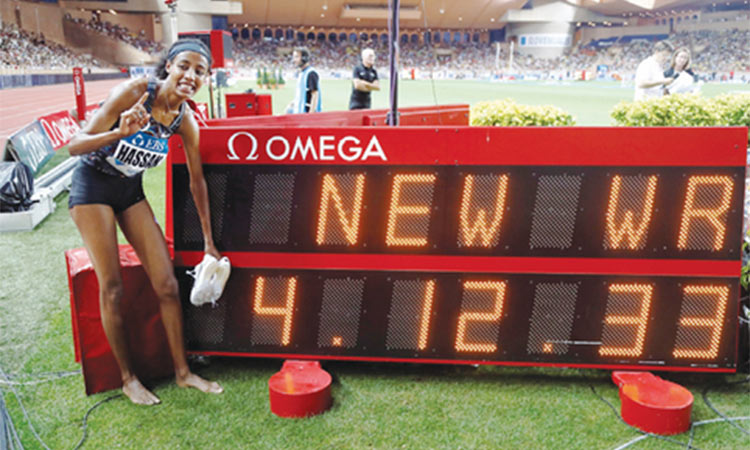 Sifan Hassan of the Netherlands celebrates after winning and setting a new world record in the mile at the Diamond League in Monaco on Friday. Reuters

The 37-year-old Gatlin kept both his nerve and form after an average start to streak through the finish line in 9.91 seconds, just one-hundredth of a second ahead of much-vaunted Lyles, 21.

“It was a technical race tonight,” said Gatlin, the 2004 Olympic gold medallist and current world champion who served a doping ban between 2006-10.

“I just kept focused as I knew Noah would be coming after me like a bat out of hell!” Gatlin said.

There was an outstanding performance in the women’s mile, which is not an Olympic or world distance, as Ethiopian-born Hassan came home in 4min 12.33sec, smashing by 0.23 seconds the previous best set in 1996 by Russian Svetlana Masterkova.

Hassan, twice European champion over 1500m and once 5000m gold medallist, cracked the field with two laps to go and streaked through the line with teeth gritted, collapsing as the timer flashed up her feat.

Only four runners have gone faster than Amos’ time, which was the 15th fastest ever run over the distance.

Another star showing came in the men’s pole vault where Poland’s in-form Piotr Lisek again went over the mythical 6m barrier, winning with a best of 6.02m, going close three times at 6.06.

American teenager Sydney McLaughlin kicked off the evening in impressive style, setting a world-leading 53.32sec in the 400m hurdles.

There was no Caster Semenya in the women’s 800m won by American Ajee Wilson.

In her absence, Wilson won easily in 1:57.73, almost three seconds off Semenya’s best for the season.

A loaded field in the women’s 200m saw Shaunae Miller-Uibo of the Bahamas, the reigning Olympic 400m champion, win in 22.09sec ahead of Jamaica’s Elaine Thompson, who won the sprint double in Rio, and two-time defending world 200m champ Dafne Schippers of the Netherlands.