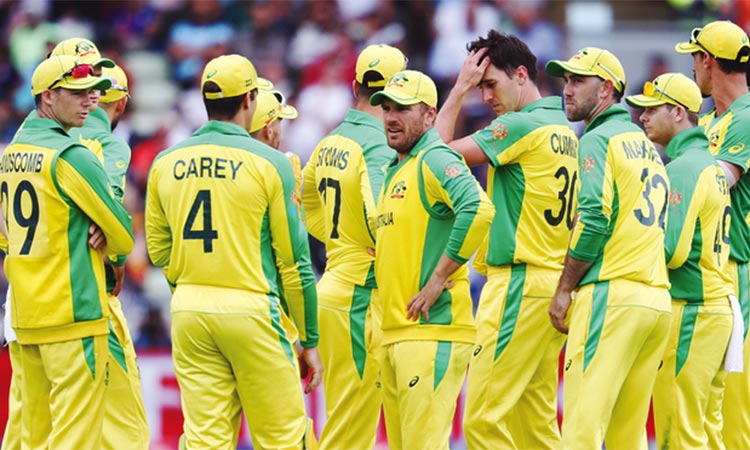 Australia players look dejected after losing the semi-final against England at Edgbaston in Birmingham on Thursday. Associated Press

Aaron Finch insisted he was proud of Australia’s progress in the last 12 months despite their embarrassing World Cup semi-final thrashing against England on Thursday.

Finch’s side slumped out of the tournament in limp fashion as England swept to an eight-wicket win at Edgbaston.

Defending champions Australia were dismissed for just 223 after opting to bat first and England romped to victory in only 32.1 overs.

Australia had finished second in the group table after winning seven games, only to be out-classed by an England side they had easily defeated in the group stages.

Finch, who was out for a duck, conceded it was Australia’s worst performance of the World Cup.

But the skipper was adamant Australia were still in a better place now than last year, when they crashed to a 5-0 one-day international series defeat in England.

“Really proud of where we have come from and the gains that a lot of players have made over the last 12 months in particular,” Finch told reporters.

“But at the same time we came here today to win a semi-final and get ourselves into a position to win another World Cup.

“So that was really disappointing how it ended, especially to put up probably one of our worst performances overall for the tournament.”

It was a tame end to a promising campaign for the five-time champions, who had welcomed disgraced stars David Warner and Steve Smith back into their squad ahead of the showpiece event.

Warner stood out with three centuries to make his mark after returning from a ball-tampering ban along with Smith.

It was Smith’s gritty 85 on Thursday that lifted Australia past 200 after they lost their top three for just 14 runs.

But Finch admitted they lost the match in the first hour of play against an inspired England pace attack led by Chris Woakes, who claimed three key wickets.

“Definitely in the first 10 overs of the game,” Finch said when asked about the turning point in the game.

“The damage was really done with the ball. That sets you back. That forced us to rebuild for such a long time and start to drag some momentum back.

“And then you lose a couple of quick wickets again, new batters starting, it is always tough against really good leg-spin and good quicks as well.”

England openers Jason Roy, who hit 85 from 65 balls, and Jonny Bairstow, who made 34, took the game away from Australia with a superb 124-run partnership for the first wicket.

“They played exceptionally well. We know how dominant they are when they get on top. You’ve got a very good cricket team in England,” said Finch, who predicted a “hell of a game” between the hosts and New Zealand in the final at Lord’s on Sunday.

For just the second time in the past seven World Cups, Australia have failed to make the final.

But Australia wicketkeeper Alex Carey echoed Finch’s refusal to be down-hearted when he faced the media with six stitches on his chin after being by a bouncer from England’s Jofra Archer.

“I guess if you go back 12 months, nobody outside would have given us a chance to be in the World Cup semi-finals,” said Carey, who made a gritty but futile 46. Meanwhile, Australian media lamented their team’s “shellacking” by England in the semi-final Friday, warning it was an ominous harbinger for the upcoming Ashes series.

The Age’s Jon Pierik said the five-time champions were “chastened” after a one-sided defeat, pointing to a string of injuries that disrupted Australia’s momentum.

“Their campaign fell apart from the moment Shaun Marsh and Glenn Maxwell were hurt in a torrid net session in Manchester,” he wrote.

“Two days later, (Usman) Khawaja strained a hamstring in the shock defeat to South Africa — only their second loss of the tournament to that point.”

ABC cricket correspondent Geoff Lemon said Australia’s weakened line-up had no answers to an England bowling attack that finally matched the achievements of their free-scoring batters.

“It was the local bowlers who brought the fire. Right from the top, this was England bowling with serious heat,” he said, noting it was the first time Australia had lost in eight semi-final appearances.

Just last month, former Australian captain Mark Taylor warned an England failure at the World Cup would severely dent their confidence in the Ashes Test series, which begins next month.