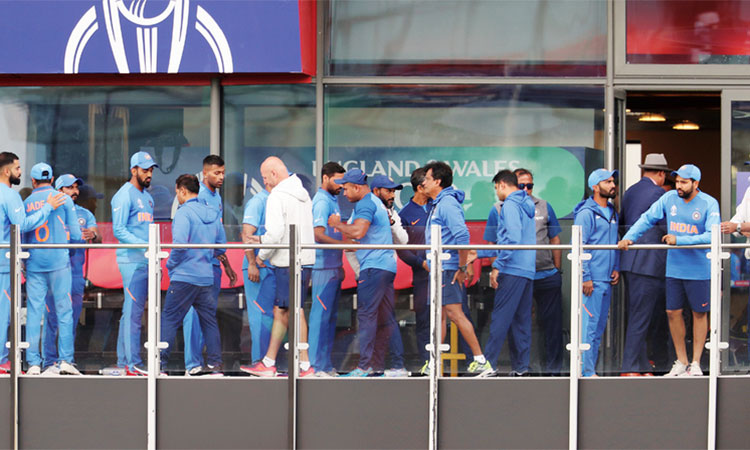 Dejected Indian players console each other after their shock loss to New Zealand at Old Trafford in Manchester on Wednesday. Associated Press

As consistent as they have been in reaching the knockout stages of International Cricket Council (ICC) events, fancied India have, in the last four years, failed to overcome the pressure-cooker situation and clinch the title, making them look like chokers after their most recent reversal against New Zealand in the World Cup semifinal on Wednesday.

Led by Virat Kohli, arguably the best batsman in world cricket at present, India came into the tournament as one of the favourites to lift the crown.

Throughout the group stages of the 10-team event, the Men in Blue played true to their favourites tag by winning seven of the eight games they played with the one against the Kiwis getting called off due to rain. They lost to England, but still managed to top the group with 15 points from nine matches.

In the semifinal against New Zealand, who reached the knockouts by the skin of their teeth after finishing fourth, India were overwhelming favourites to win.

But despite restricting the Black Caps to 239/8 in 50 overs, India were blown away by the Kiwi bowlers led by Matt Henry (3/37) on the reserve day after play could not be completed on the first day due to inclement weather.

India lost four top order batsmen for just 24 runs inside 10 overs before Ravindra Jadeja (77) and M.S. Dhoni (50) shared a 116-run seventh wicket stand to raise hopes for an unlikely victory. However, it wasn’t enough in the end as India fell short by 18 runs.

It was a similar story in the semifinal of the 2015 World Cup when India lost to Australia after a spectacular performance from Steve Smith helped the hosts post a total of 328 runs.

India had a promising start as the opening pair of Rohit Sharma and Shikhar Dhawan put together 76 runs. But pressure got the better of them as a batting collapse followed and

India were reduced to 108/4. James Faulker was the pick of the bowlers with 3/53 while Mitchell Starc and Mitchell Johnson bagged a couple of wickets as well. India lost the match by 95 runs as their unbeaten streak in the tournament came to an end.

While few experts have said that it was the overhead conditions on the reserve day that helped New Zealand bowlers, the way the likes of KL Rahul and Rishabh Pant got out clearly showed that they failed to soak in the pressure and bat freely.

Kohli, who has a poor record in World Cup semis, failed to make an impact and Rohit Sharma too got out to a superb delivery from Henry. But it was the Indian middle order, chopped and changed with Dinesh Karthik sent in ahead of Dhoni at No. 5, that crumbled without any fight, leaving the team tottering at 92/6 before Jadeja played the innings of his life.

Taking nothing away from Jadeja’s gritty knock, the match was all but over for India at that stage and he played without pressure with nothing to lose. Dhoni held one end up like he does these days with his hitting abilities on the wane, but it was always an uphill task.

Although India lost by a narrow margin of 18 runs, the top order collapse spelled their doom. It reminded many of India’s top-order bungle in the 2017 Champions Trophy final against arch-rivals Pakistan.

India were clear favourites to defend their Champions Trophy against Pakistan but a poor bowling effort saw Pakistan batters set India a target of 339 runs in 50 overs.

The manner in which the famed Indian top order collapsed brought to the fore their failure to handle the pressure of the big stage as the Men in Blue were handed an embarrassing 180-run defeat.

In the 2016 World T20, Kohli and Co. failed to get to the final despite a decent performance before that on home soil. In the semifinal against the West Indies, India batted superbly to post 192/2 in 20 overs.

But this time, their bowlers, including Jasprit Bumrah who was still on the rise then, choked as Windies batters led by Lendl Simmons took them to the cleaners and gunned down the target with two balls and seven wickets to spare.

South Africa have always been labelled as the eternal chokers of world cricket, and this time round they gave an even poorer account of themselves by failing to qualify for the last-four stage. But with India repeatedly missing the mark despite coming close every time, it’s hard not to brand them in the same category.