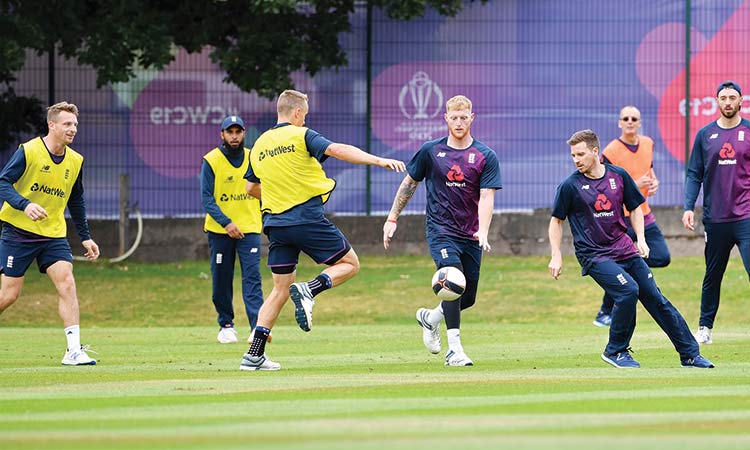 England players play football during a training session in Birmingham on Wednesday. Reuters

Birmingham: England captain Eoin Morgan has urged his side to embrace their World Cup dreams as they prepare for blockbuster clash against old rivals.

Morgan can lead England to their first World Cup final since 1992 if they beat the holders at Edgbaston.

Advancing to Sunday’s title match at Lord’s would be the culmination of four years’ hard work for Morgan and his squad after their dismal performance at the 2015 edition.

On the eve of the crunch clash, Morgan issued a passionate plea for his players to take pride in their achievements so far and to relish their moment in the spotlight rather than be weighed down by pressure.

“Sometimes I’m guilty of it, you can lose sight of the position you’re in and the fact you’re living your dream,” Morgan told reporters on Wednesday.

“I think it’s possible to play with a smile on your face tomorrow.” Asked if the World Cup hosts were feeling excited, nervous or simply focused on the task at hand, Morgan added: “All of those things. But I think excitement probably should be the dominant one.

“Everyone is excited to play this semi-final. The fact that through the group stages getting to this stage looked unlikely, or was called into question, makes it even more exciting for us.”

Meanwhile, Australia captain Aaron Finch feels with the amount of time they have played England in recent times, it will all boil down to whoever holds their nerve better when the two traditional rivals lock horns at Edgbaston Ground on Thursday.

England have won 10 of the last 11 meetings between the two sides since the 2015 World Cup.

At this World Cup, Australia beat England by 64 runs earlier at Lord’s. Finch said England have been “front-runners” in world cricket since the last World Cup which Australia and New Zealand hosted.

“I think when we look at our side at the moment we are full of confidence going into this game. Obviously England have been probably the front-runners in world cricket over the last four years, the way they have changed the game, their game plan in particular has been very aggressive, taking it to the opposition,” Finch said at the pre-match press conference.