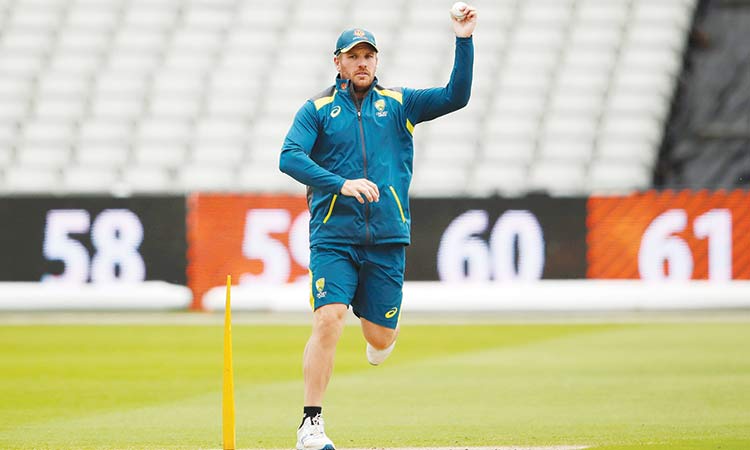 Australian skipper Aaron Finch during nets at the Edgbaston Ground in Birmingham on Wednesday. Reuters

Four years of planning will be put on the line for England when they face holders Australia in a blockbuster cricket World Cup semi-final at Edgbaston on Thursday.

England’s woeful first-round exit at the 2015 edition prompted a complete rethink of their approach to one-day internationals for a side that had long placed Test success above all other considerations.

Australian coach Trevor Bayliss was drafted in with the aim of guiding their bid for a first World Cup title.

The transformation has been impressive, with England climbing to number one in the ODI rankings under the astute captaincy of Eoin Morgan.

Their rise to the summit has been based on dynamic run-scoring, with in-form openers Jason Roy and Jonny Bairstow leading the way.

But the stakes for hosts England are higher than simply the winning of a match that would see them into a final against New Zealand at Lord’s on Sunday.

Satellite subscription host broadcaster Sky has said it will allow the final to be shown on free-to-air television in Britain — but only if England are involved in the showpiece match.

It would be the first time since 2005 that a major England men’s home match had emerged from behind a UK television paywall, with cricket having a chance to reconnect with a ‘lost’ audience in its birthplace.

Australia, however, have never lost any of their seven previous World Cup semi-finals — although they did tie with South Africa at Edgbaston 20 years ago before advancing into the final on superior net run-rate.

They landed a psychological blow in the group stage when they beat Ashes rivals England by 64 runs at Lord’s last month.

Australia left-arm quicks Jason Behrendorff and Mitchell Starc shared nine wickets between them in a match where Australia captain Aaron Finch made 100 after surviving a testing opening from England’s fast bowlers.

Roy, however, was missing with a torn hamstring and since his return, England have scored crucial wins over India and New Zealand that took them into the semi-finals.

By contrast Australia, who have not won in any format at Edgbaston since the 2001 Ashes Test, suffered a surprise 10-run defeat by South Africa at Old Trafford in their final group game.

England, as well as finding a way to cope with Starc, will have to contain the run-scoring threat of a powerful Australian top order.

David Warner has scored 638 runs this tournament following the left-handed opener’s return to international cricket after a 12-month ban for his role in a ball-tampering scandal in South Africa.

Australia coach Justin Langer led his squad on a barefoot walkabout around Edgbaston on Monday before they shared stories on the outfield in a so-called “bonding circle”.

“Haydos (Matthew Hayden) and I used to do it as a bit of a ritual before every Test match,” former Australia opener Langer explained.

“If you go back 12 months there wasn’t much to be relaxed and chilled about in Australian cricket, was there? We went through a major crisis in our cricket. It didn’t just affect our cricket, it affected our country.

“We’ve got to work hard on being more humble in what we do and being focused on playing good cricket.”

But despite the coach’s new-age talk, Australia’s Nathan Lyon tried to put pressure on England in typically acerbic style.

“It’s all on them,” the off-spinner said. “It’s their World Cup to lose if you ask me.”

Meanwhile, Langer revealed on Tuesday that Peter Handscomb will be picked to face hosts England in their cricket World Cup semi-final at Edgbaston.

Handscomb was left out of Australia’s initial 15-man squad after the return of Steve Smith and David Warner from year-long ball-tampering bans.

But the 28-year-old was drafted in as a replacement for the injured Shaun Marsh, and with Usman Khawaja ruled out of the rest of the tournament with a hamstring problem, there is now a batting vacancy that Handscomb will fill on Thursday.

“He deserves it. He was so unlucky not to be in the initial squad after what he’d done to help us get to that point.

“He’s in good form, he’s played well for Australia A and gives us that nice balance through the middle order. He’s on top of his game.”

Langer also confirmed Matthew Wade would come into the squad in place of Khawaja, pending approval from the International cricket Council’s technical committee.

“He’ll just come in as the official replacement for Usman Khawaja. Like everyone in the squad there’s potential for him to play, definitely,” Langer said.