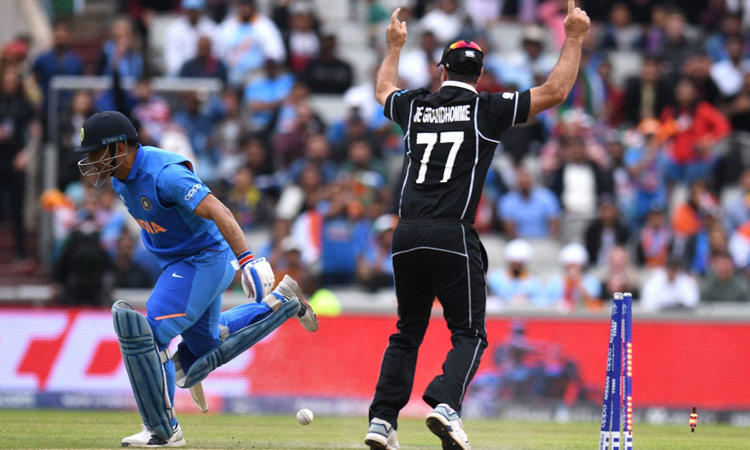 Colin de Grandhomme (R) celebrates as Mahendra Singh Dhoni (L) is run out during the first semi-final on Wednesday. AFP

This was on a day when the Kiwis' under-average performance totalling 239 runs(in 50 overs match) had very few takers in the betting bazar (market). For the much-hyped semifinal challenge, the rate for favourite India was Rs4.35 while for NZ, it was Rs49! That meant, as per book-making, New Zealand was a loser, almost.

Surprisingly, in the session-to-session online bet placing, the punters, in the final stages of the match had favoured India (when the score was 200/6 and Dhoni & Jadeja were on the crease). But a big disappointment waited for them: New Zealand bounced back in the last two overs. Dhoni's run out at the fag end of the game came as a heartbreaker for punters, as all their money went down the drain, leaving the bookies with the booty. Those who placed their bets on NZ also had a feel of winning a lottery.

"The satta bazaar yo-yoed in initial three overs when a much confident Team India's top three batsman -- R. Sharma, K.L. Rahul and skipper Virat Kohli -- lost their wickets and went back to the pavilion in just 5 runs. "Our hope was high yesterday, but today it turned into the biggest nightmare of this World Cup with the miserable defeat of India," Rajveer Singh (not his real name), Gurugram's Sadar Bazaar-based punter, said.

"Besides Gurugram, Ghaziabad, Faridabad, and Delhi, where thousands of big punters had reserved suites and rooms in five star hotels for organising late night parties, had to cancel their parties/get-togethers after they suffered huge losses as India went down fighting in the 48th over," Rajveer Singh said, adding that he lost over Rs10 crore that he had gained from previous matches.

For others as well, it was a party that was not to be. "I was very happy when I saw top four Indian batsman losing their wickets before 10 overs and, even the Indian bowlers were not in form — all because I had placed my bids on New Zealand. I took maximum risk and it perfectly turned out to be a lottery," revealed Siddharth Mishra (not his real name), a Delhi-based bidder.

"We lost badly today. Even in session-to-session bidding, punters lost huge amounts as they had placed bets on Dhoni-Jadeja partnership which was in top form during the last session," said another punter. India's crash at Old Trafford, finally, pushed Ghaziabad's trading mandi, known for satta, into gloom.

The betting bazaars in Delhi had gone crazy on Tuesday as the police estimated that the bids in the illegal satta (betting) market had crossed the Rs150 crore mark in the National Capital Region (NCR).

Bets were placed on the margin of victory in terms of runs and wickets and also on whether runs scored by India and New Zealand could be 400-plus or below 400.

An interesting bet was on as to who would take more than three wickets from both camps -- whether it would be spinners or pace bowlers. Also, was it to be Jaspirt Bumrah/Yuzvendra Chahal or New Zealand's Trent Boult or Lockie Ferguson?

The base betting rate of Indian players, for example, in case of Bumrah, it was Rs20, while for Boult, it was Rs7, said a source.

The other bets were on star batsmen — Indian skipper Virat Kohli, his deputy Rohit Sharma, New Zealand captain Kane Williamson and Martin Guptill — whether they would score half-century or a century.