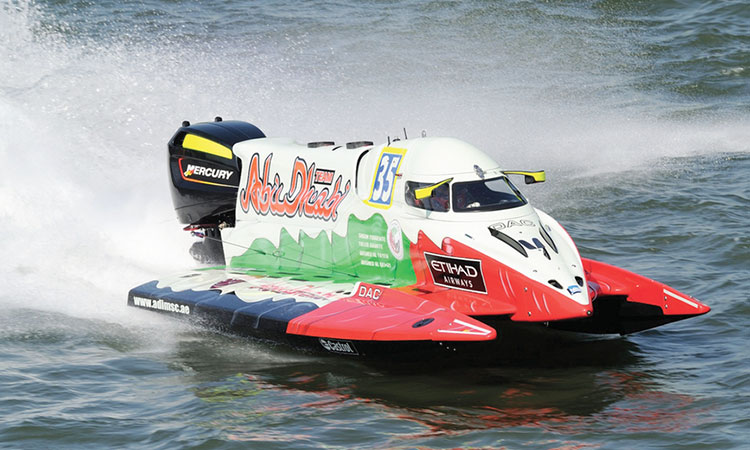 A Team Abu Dhabi boat in action during the previous round.

Team Abu Dhabi’s pursuit of a quadruple world powerboat racing triumph switches to northern Poland this weekend as they look to clinch a first major title of the season.

Reigning Formula 1 individual champion Shaun Torrente, Emiratis Rashed Al Qemzi and Rashed Al Tayer and Italian Tullio Abbate have the upper hand as they head into the decisive round of the World Endurance Championships in Augustów.

Victory in the 24 Hours of Rouen in France two months ago for the crew of Abu Dhabi 35 has put them in pole position for the Necko Endurance, which consists of two six-hour races on Saturday and Sunday.

The all-Emirati line-up of Faleh Al Mansoori, Rashed Al Remeithi, Majed Al Mansoori and Mohamed Al Mehairbi, who took Team Abu Dhabi 36 to third place in Rouen, will also be in the hunt again on the Necko Lake.

The two crews have been spending two days training in San Nazzaro, Italy this week under the guidance of team manager Guido Cappellini and Salem Al Remeithi, General Manager of Abu Dhabi International Marine Sports Club, prior to the start of practice on Necko Lake on Friday.

With four powerboat world titles the outright target for the team this season, Torrente tops the UIM F1H2O World Championship standings while Rashed Al Qemzi leads the F2 title race after his recent victory in Lithuania.

Torrente hopes to have the world endurance crown in his possession before heading straight from Poland to Italy to begin his defence of the UIM XCAT World Championship alongside Faleh Al Mansoori the following weekend.

“It’s one step at a time and we have to stay focused on the next race,” said the American who maintained his lead in this year’s F1 title race with second place in Sunday’s Grand Prix of France.

Meanwhile, Australia’s Maritimo Racing is preparing for a mass of events in the upcoming months across two different championship series both here and internationally.

The newly constructed Maritimo R30 is in transit from Australia to Italy for the Round 1 of the UIM XCAT World Championship in Stresa, Italy after undergoing extensive testing on Australian waters.

The team is also busy preparing the team’s R36 and R40 in readiness for Round 2 of the Australian Offshore Superboat Championship in Bowen, QLD which is scheduled on the same weekend as the opening round of the UIM XCAT World Championship, said Maritimo’s Tom Barry-Cotter.

The team is dealing with the calendar overlap by rostering a reserve team to take on the responsibilities of campaigning the two-boat team in North Queensland in the Australian series, whilst the usual team will compete in Italy.

The newly formed team to compete in Australia will undergo extensive testing on the Gold Coast in the coming weeks in order to bring themselves up to speed and familiarize themselves with Maritimo Racing’s state-of-the-art equipment.

“We are very excited to welcome some new, yet familiar faces to the team in order to continue our local championship push”, said Tom Barry Cotter. “Chris and Brendan Frier, and John Barbagallo are usually in competition with Maritimo Racing, however after a stint away from the sport their services were on offer, and their experience proves extremely valuable in maintaining a highly competitive package.

“Whilst the aforementioned are typically racing against Maritimo, Ian Harris and Steve Cox are very familiar with the team’s equipment due to being tasked with the construction of Maritimo Racing’s boats.

“We have managed to bring together a tremendous wealth of knowledge and experience, with what is an extremely professional group of people, and we are very confident that the team is in safe hands.”

Whilst the team is being represented on home soil, the push for taking top prize in the UIM XCAT World Championship will just be getting underway.