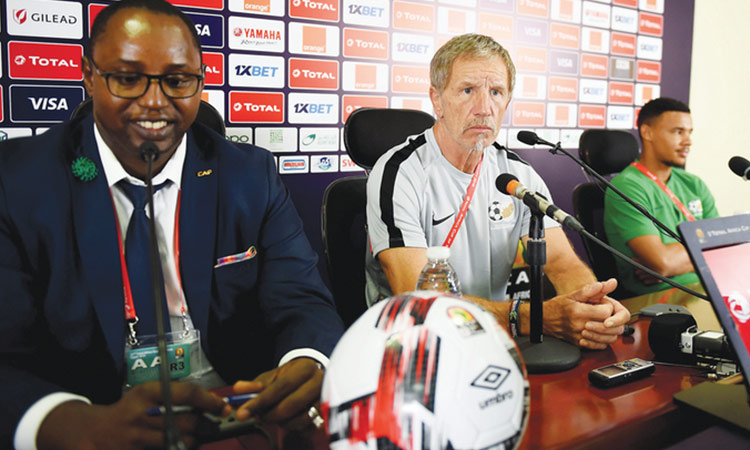 South Africa’s coach Stuart Baxter at a press meet on the eve of their Wednesday’s CAN quarter-final match against Nigeria. Agence France-Presse

South Africa coach Stuart Baxter has rubbished the contention by his Nigeria counterpart Gernot Rohr that Bafana Bafana are the favourites heading into Wednesday’s Africa Cup of Nations quarter-final clash.

Having only scraped through the group stage, Baxter’s side shocked tournament hosts Egypt in the last 16. However, South Africa’s coach was quick to temper expectations against a Nigeria team that eliminated defending champions Cameroon in the last round.

“Nigeria are absolutely one of the best teams on continent and have been for a long time. One game doesn’t make us favourites. I don’t think he’s (Rohr) fooling anybody,” Baxter said on Tuesday.

“When we hit a balance between good organisation and getting on the ball and playing with pace and using our natural inherent technique we can give anybody a game.

“We’ll be respecting Nigeria but not fearing them. We will have to produce a very good South Africa performance to beat them.” The two are teams are familiar opponents as South Africa and Nigeria were paired together in qualifying. Baxter oversaw a 2-0 away win in Uyo at the start of the campaign before a 1-1 draw in Johannesburg.

South Africa’s shock 1-0 defeat of Egypt was played in front of a capacity 75,000 crowd at Cairo International Stadium, and although a much lower attendance is anticipated at the same venue Wednesday, Baxter doesn’t believe that will have an impact on his players.

“Dare I say the crowds in South Africa for some international matches are quite sparse as well,” he said. “The players were inspired by the crowd the other evening, but I hope they don’t need that sort of crowd to find that sort of inspiration.

Ighalo finished as the leading scorer in qualifying for this year’s tournament, and he is level alongside Senegal star Sadio Mane and Algeria’s Adam Ounas at the top of the charts with three goals so far at the finals.

“If I don’t win the golden boot but won the trophy I’d be very happy because we are here to do that,” Ighalo said ahead of Wednesday’s clash against South Africa.

“I didn’t say I’m not interested but we are here as a team and want to try and win it as a team. I’m a striker, I want to score goals, but if they don’t come and we win the game I will be more satisfied.”

After scoring the winner in Nigeria’s opening Cup of Nations game against Burundi, Ighalo delivered a match-winning performance against defending champions Cameroon in the last 16.

He scored twice and set up Alex Iwobi for the decisive goal in Alexandria as Nigeria rallied from 2-1 down to earn a thrilling 3-2 victory. Ighalo used his feet to again hit back at his detractors.

“I don’t really pay attention to critics. I’m a professional and people are bound to criticise me. I think everybody here has been criticised one way or another but you don’t let that get to you,” said Ighalo.

Senegal boss Aliou Cisse meanwhile said the surprise exit of hosts Egypt and Morocco and the elimination of defending champions Cameroon has fuelled hopes of a first Africa Cup of Nations title.

Cisse was captain of the team that reached the 2002 final, losing to Cameroon on penalties, and is now coach of a strong side featuring Liverpool star Sadio Mane and Napoli defender Kalidou Koulibaly.

“It’s true that Cameroon are not here, the big favourites are no longer here today. Of course that gives us ideas and it gives us even more confidence to say yes, maybe this year will be the one,” Cisse said on Tuesday.

However, Cisse warned Senegal would pay the price for looking any further than Wednesday’s quarter-final with Benin in Cairo.