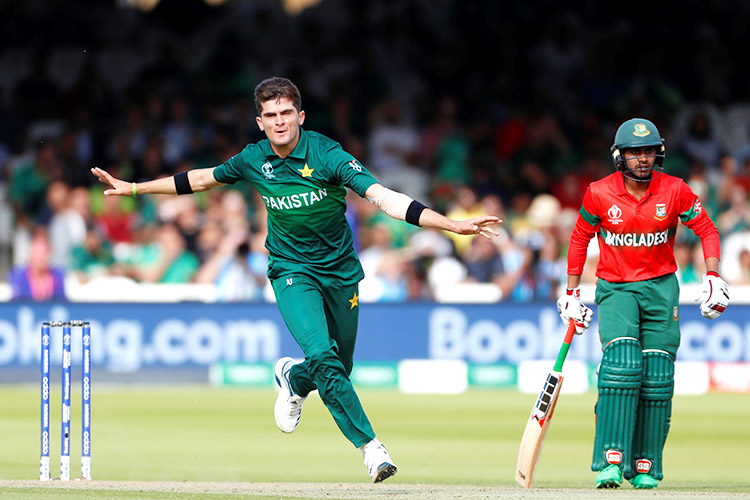 London: Pakistan thumped Bangladesh by 94 runs in their last World Cup group match on Friday but suffered a painful exit as New Zealand pipped them to a semi-final place on net run-rate.

Sarfaraz Ahmed’s team needed to smash the world record for margin of victory in a one-day international but a miracle win never looked remotely likely at a sun-drenched Lord’s.

Pakistan’s total of 315 for nine meant Bangladesh needed only eight runs to end the 1992 world champions’ hopes of advancing to the semi-finals.

Teenager Shaheen Afridi returned the best-ever figures for Pakistan at a World Cup of 6-35 as they finished level on 11 points and games won (five) with fourth-placed New Zealand, missing out on the top four due to their inferior run-rate.

The other teams in next week’s semi-finals are Australia, India and hosts England, with the final group matches taking place on Saturday.

Pakistan finished the tournament with four straight wins but ultimately paid the price for a sluggish start.

“Unfortunately we played very good Cricket in the last four matches but we have not qualified,” said Sarfaraz.

“Only the one match will cost us in the whole tournament (against West Indies). We played very good Cricket.”

Imam-ul-Haq (100) and Babar Azam (96) eventually stepped on the gas, reaching their 150 partnership for the second wicket off 146 balls but both fell in quick succession to suck the momentum out of their innings.

A late flourish from Imad Wasim, who scored 43 runs from 26 balls, boosted the score but Pakistan lacked the muscle to put themselves out of sight.

In reply, Shakib Al Hasan (64) scored his seventh fifty of the World Cup to shoot to the top of the tournament’s run-scoring charts, with 606 runs at an average of more than 86.

His seven scores of fifty-plus equal the record set by India’s Sachin Tendulkar at the 2003 tournament.

But Bangladesh lost wickets at regular intervals and were bowled out for 221 in the 45th over, with man-of-the-match Shaheen doing most of the damage with his left-arm seam.

Pakistan paid a heavy price for a slow start to their World Cup campaign, winning just one of their first five matches.

They were shot out for a paltry 105 in their first match, with the West Indies winning in just 13.4 overs, meaning they took a huge hit on run rate. They came back strongly to beat South Africa, New Zealand and Afghanistan to sit fifth in the 10-team table, but in the end left themselves too much to do.

Bangladesh ended the 10-team group phase in seventh spot with three wins in their nine matches.

Bangladesh skipper Mashrafe Mortaza said: “We feel very sorry for Shakib that we couldn’t support him all through the tournament, otherwise things could have been very different. He has been fantastic.”

Meanwhile, a tweet by the International Cricket Council (ICC) with regard to Pakistan’s chances of making the semi-finals has caused a bit of a stir on social media.

During the mid-innings break, the ICC tweeted the number of runs Bangladesh will have to be bowled out for with a GIF that was a clip from the 1994 Hollywood movie “Dumb and Dumber” featuring Jim Carrey in which the actor’s character is gleefully saying, “So you’re telling me there’s a chance?”

Soon fans started accusing the ICC of trolling the Pakistan cricket team and its supporters. A number of conspiracy theories were also floated in the replies section, including that ICC and the big teams like India, England and Australia had conspired to get Pakistan knocked out and that the ICC Twitter account was controlled by Indian fans, among others.