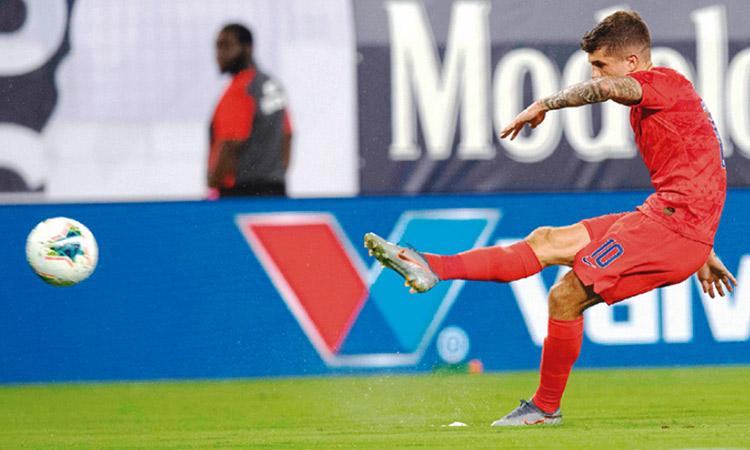 US’ Christian Pulisic scores against Jamaica during their Gold Cup semi-final match on Wednesday. Agence France-Presse

Christian Pulisic scored twice as the US defeated Jamaica 3-1 to reach the CONCACAF Gold Cup final after a weather-disrupted semi-final on Wednesday.

The US will now face fierce regional rivals Mexico in Sunday’s final at Soldier Field in Chicago.

New Chelsea signing Pulisic bundled home a rebound from Jordan Morris’s shot in the 52nd minute to give the US a 2-0 lead and then added third goal late on after a storm in Nashville had forced the players off for almost an hour and a half.

“It was a long night, but the mentality of the team was excellent,” veteran US midfielder Michael Bradley said.

“We’re really excited -- US v Mexico in the final, there’s not much better than that.”

US coach Gregg Berhalter was happy with the way his team had handled the lengthy interruption.

“It’s part of soccer and the guys dealt with it in a really good way,” Berhalter said. “It gave us time to look at film and give them encouragement.

“We showed a relentless spirit when we came back out tonight.”

The defending champions had taken the lead through a superb Weston McKennie ninth-minute strike following a dominant opening spell which saw them carve out a series of chances.

Schalke 04 player McKennie was a constant threat for the hosts, who had already gone close to scoring through Paul Arriola and Reggie Cannon when Bradley sprayed a pinpoint pass to Cannon on the flank.

FC Dallas fullback Cannon crossed into the area, and after the ball rolled past Jozy Altidore, McKennie swept home.

Pulisic almost doubled the lead in the 12th minute when his free-kick from the left tested Jamaica goalkeeper Andre Blake, who parried away. The bright US opening was halted four minutes later when an electrical storm rolled into the region.

With lightning a possibility, tournament officials called the players off the field and cleared the stands.

It was another hour and 27 minutes before play could resume, and the US were slow to regain their rhythm.

But they started the second half brightly and when Morris unleashed a well-struck shot Blake was unable to hold on. The rebound fell into the path of Pulisic who jabbed home an opportunistic strike.