Tamim joins the club of costliest drops with Rohit blooper 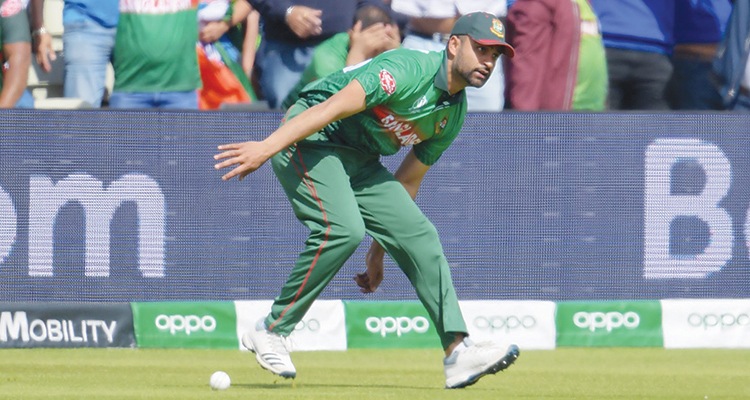 How a dropped catch not only changes the course of a game but also seals the fortune of a team was once again evident when a sloppy Bangladesh spurned a chance to make it to the semis at the World Cup.

In-form India opener Rohit Sharma, when on nine, got a reprieve as a butter-fingered Tamim Iqbal put down a sitter off Mustafizur Rahman in the square leg region with the scoreboard reading 18 in 4.4 overs.

Rohit, who went on to score his fourth century of the World Cup, had been dismissed by Mustifuzur three times in their previous five meetings. And this could have been the fourth.

This blooper will surely go down as one of the costliest misses in the history of the game as it ended Bangladesh’s dream run at the World Cup.

Among the other costliest misses, in terms of runs added after being put down, is that of Rohit again.

Sri Lanka’s Thisara Perera dropped him when he was on 4, he added another 260 runs to his score and created a history, smashing a whopping 264 – the highest individual score in ODIs.

However, going by the impact of a dropped catch on the result of a tournament not only the match, Herschel Gibbs’ blunder remains on top even after 20 years.

It was the last game of the Super Sixes at the 1999 World Cup, and a must-win for Australia to progress to semi-finals.

Having beaten India and Zimbabwe, Australia needed to win against South Africa, who had already booked their place in the semis.

Australia were struggling in their chase of 271, having lost three key batsmen, they needed another 119 with Ricky Ponting and Steve Waugh at the crease.

Steve, when on 56, flicked an innocuous looking delivery from Lance Klusener to Gibbs at mid-wicket. Gibbs caught it, but in a premature celebration, he hurled the ball into the air and completely lost control of it.

Steve went on to score 120, which meant the Kangaroos had to face Proteas in the semis, which ended in a tie and Australia progressed to the final by virtue of having beaten South Africa in the Super Six stage.

The infamous put-down became a folklore of the sport, enshrined in the annals as a very famous urban legend that gained ground afterwards attributing to Steve where he is supposed to have said: “You just dropped the World Cup mate.”

And the rest is history. Australia won three consecutive showpiece events between 1999-2007.

The other costly howlers in a World Cup encounter was when West Indies all-rounder Marlon Samuels spilled a simple chance offered by Kiwi batsman Martin Guptill in the fourth quarter-final of the 2015 showpiece event.

Guptill miscued a shot off Jerome Taylor in the very first over of the match and ended up hitting it straight to Samuels at square leg.

The fielder looked unprepared to take the catch and gave him a big reprieve with his score at 4. Guptill put 233 more runs on the board and surpassed Chris Gayle’s record of the highest score in a World Cup match.

Similarly, Dilhara Fernando of Sri Lanka put down Adam Gilchrist when on 31 in the final of the 2007 World Cup and he went on to score 149 as Australia posted a mammoth 281 in a rain-marred 38-over-a-side match.

In a 1990 Test series against England, India were let down in the only Test that they lost by a dropped catch from wicketkeeper Kiran More.

Graham Gooch was the batsman who edged the ball to More when on 36; however, the wicketkeeper’s failure to cling on to the ball cost his team a staggering 297 runs more.

Gooch scored 333 and England routed India by 247 runs to take a 1-0 lead in the series, which turned out to be their series-winning margin.

Cricket history is full of such blunders, when the whole team paid the price for a mistake of one person.