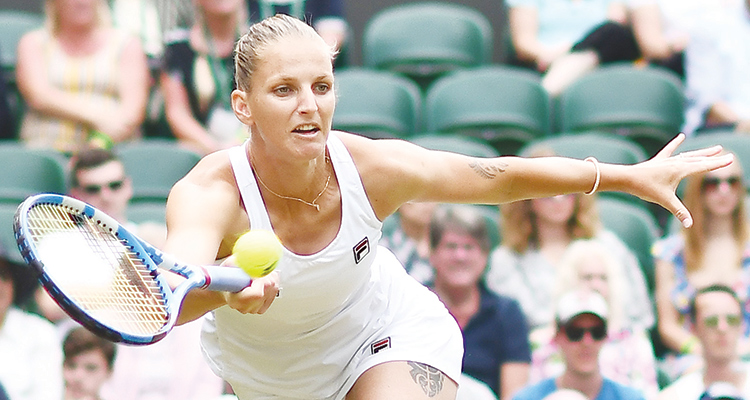 Karolina Pliskova returns to Monica Puig during their second round match at the 2019 Wimbledon Championships on Wednesday. Agence France-Presse

Czech third seed Karolina Pliskova raced into the round of 32 with a pitch-perfect 6-0, 6-4 thrashing of Puerto Rico’s Olympic champion Monica Puig.

Pliskova, one of four players who could end Wimbledon as world number one, will face Hsieh Su-wei of Taiwan for a spot in the fourth round.

The former World No.1 is unbeaten since losing to twin sister Kristyna at the Nature Valley Classic in Birmingham. On Wednesday, she came up with a near-flawless performance at the All England Club, winning in exactly 60 minutes on Centre Court over her over-awed Puerto Rican opponent.

“I think I was much better than the first round for sure today,” Pliskova said in her post-match press conference.

Meanwhile, three-time major winner Stan Wawrinka was knocked out of Wimbledon, falling in five sets to 6ft 11in (2.1m) Reilly Opelka -- the tallest man in the sport.

Opelka fired 23 aces and 59 winners and goes on to face either 2016 runner-up Milos Raonic of Canada or Robin Haase of the Netherlands.

Opelka will be appearing in the third round at a Slam for the first time having never won a grass court match in his career prior to coming to Wimbledon. Whereas the giant in the Opelka-Wawrinka duel won the match, it was the shorter Italian, Thomas Fabbiano, who added some literal meaning to his giant-killing run in London.

After the world No. 89 stunned seventh seed Stefanos Tsitsipas in round one at the All England Club, taking all five sets to secure the win, the diminutive Italian went the distance again in round two, this time against Ivo Karlovic.

Fabbiano, listed at 1.73m tall in his official ATP profile, slugged it out for more than three hours against the Croatian giant, who stands nearly 40cm taller at 2.11m. It was a David vs Goliath battle in more ways than one as Fabbiano knocked off the veteran.

Despite the match ending after a sapping three hours and seven minutes, Fabbiano still had the energy to do a little scoot across the court and pump his fists as the small but vocal crowd on the outside court cheered its approval.

Meanwhile, Russia’s Margarita Gasparyan was clearly unfortunate as she was forced to retire when just two points from victory against Ukraine eighth seed Elina Svitolina.

World number 62 Gasparyan was 7-5, 5-4 ahead when she collapsed to the ground on Court Three, suffering with cramping.

Although she bravely tried to continue, the Russian, who has undergone three knee surgeries in her career, was forced to quit.

Next up is a last-32 clash with either fellow ex-world number one Simona Halep or Mihaela Buzarnescu. It’s the first time that 2018 French Open champion Halep has ever met a fellow Romanian at a Slam.

In a late Tuesday match, Bernard Tomic shrugged off the prospect of being stripped of his 45,000-pound ($57,000) prize money after losing the second shortest match at Wimbledon. The controversial Australian lost 6-2, 6-1, 6-4 to France’s Jo-Wifried Tsonga in just 58 minutes.