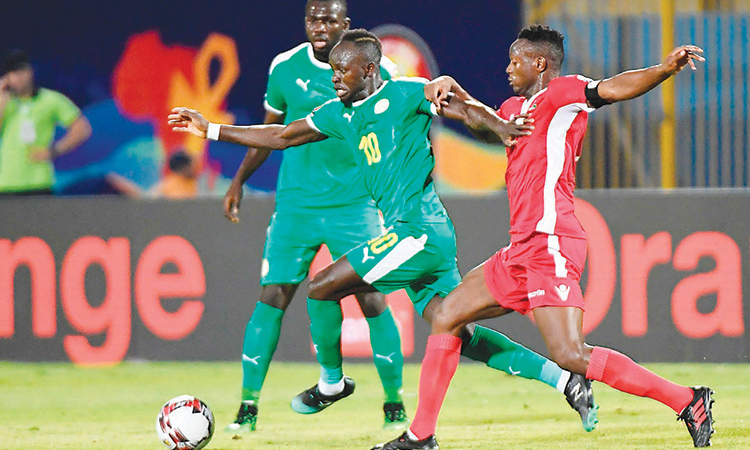 Senegal’s Sadio Mane (left) fights for the ball with Kenya’s Victor Wanyama during their Africa Cup of Nations match in Cairo on Monday. Agence France-Presse

Algeria’s Adam Ounas scored twice and Islam Slimani also netted in a 3-0 win over Tanzania as they finished top of Group C at the Africa Cup of Nations on Monday after their second-string side proved far too strong for their opponents.

The goals all came in the last 10 minutes of the first half as the pace of the Algerians and the accuracy of their passes cut open the Tanzanian defence almost at will.

The victory meant Algeria matched hosts Egypt and Morocco with a full haul of nine points in the group stage, while Tanzania finished bottom as they returned to the tournament for the first time since 1980.

Algeria will face a third-placed finisher in the last 16.

Algeria made nine changes, having already secured qualification after a morale-boosting win over Senegal in their previous match, using the opportunity to rest regulars before the start of the knockout stages at the weekend.

But even with a fresh look, Algeria were far more polished than Tanzania and went almost immediately on the attack with teenager Hichem Boudaoui missing a good opportunity inside the opening two minutes.

There were several half chances that followed before Slimani ran onto a long ball between two defenders and finished with aplomb for the 35th minute opener.

The striker then played a clever one-two to set up Ounas for the second goal four minutes later.

The Champions League-winning forward had a timidly-struck first half penalty saved by Patrick Matasi before making amends with a brace after a goalless opening 45 minutes.

Ismaila Sarr put Senegal ahead on 63 minutes and Mane netted on 71 and 78 minutes, his second goal coming from another penalty.

Kenya were reduced to 10 men before the second penalty was taken with Philemon Otieno sent off for a second yellow card.

Senegal were runners-up with six points, Kenya third with three and Tanzania, back at the tournament after 39 years, ended pointless.

The qualification of Senegal raised to 10 the number of teams who have secured places in the second round, which kicks off Friday.

Hosts Egypt, surprise side Madagascar, Algeria and Morocco advanced as group winners and Uganda, Nigeria, Senegal and the Ivory Coast as runners-up. Guinea and the Democratic Republic of Congo have filled two of the spots reserved for the best four third-place teams.

With Algeria having qualified and Tanzania eliminated before the final group matches, the focus was on the battle for second place between Senegal and Kenya.

A war of words between the coaches preceded the game with France-born Kenya handler Sebastien Migne suggesting Senegal lacked the mental strength to become African champions.

Senegal coach Aliou Cisse responded by reminding Migne that his side were ranked 82 places higher in the world and the loss to Algeria was the first in four years in Africa.

Kenya were lucky to reach half-time level with Senegal at the June 30 Stadium as apart from the Mane miss, captain Victor Wanyama was not punished for handling in the box.

Patrick Matasi also made two great saves, blocking an Idrissa Gueye close-range shot and tipping a Sarr header over via the top of the crossbar.

Kenya came close to snatching the lead against the run of play just past the hour when a Dennis Omino snap shot was brilliantly parried by Alfred Gomis.

A minute later and Senegal were ahead as Matasi fell while trying to clear a cross and Sarr turned to fire superbly into the corner of the net.

Mane atoned for his penalty flop by adding a second on 71 minutes, taking advantage of poor defending from Mohamed Musa off a long ball to run through and score.

Given a second penalty, Mane made no mistake, tucking the ball into the corner despite a brave attempt by the outstanding Matasi to stop it.

Wilfried Zaha scored on his first start at this year’s Africa Cup of Nations as Ivory Coast clinched a place in the last 16 with a 4-1 victory over Namibia.

Max Gradel’s precise finish and an own goal by Ryan Nyambe put the 2015 champions in control in Cairo, with late Zaha and Maxwel Cornet efforts wrapping up the win after Joslin Kamatuka had given Namibia hope.

The Ivorians advance as runners-up of Group D behind Morocco, who snatched a last-gasp winner in a 1-0 victory over South Africa that leaves Stuart Baxter’s side relying on other results to scrape through as one of four best third-place finishers.