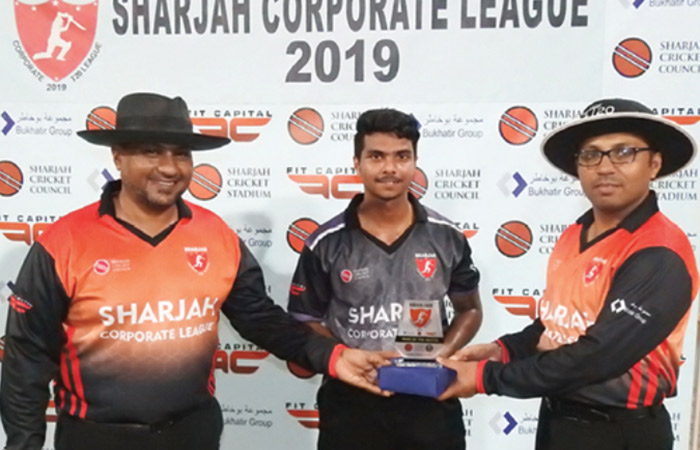 ETS’ Mohamed Halan (centre) receives the man of the match award during the presentation ceremony.

Halan claimed two crucial wickets and scored an unbeaten 89 to be declared man of the match.

Shamroz Khan was the top scorer with 37 while the others struggled against Halan (2-10) and Kalpa Vimukti (2-28).

But more than the ball Halan was destructive with the bat clobbering three huge sixes and 14 boundaries during his 36 ball stay at the crease where he scored an unbeaten 89.

Umar Khalid complemented him well with 35 from 24 balls from two sixes and two fours as they crossed the target in just 10 overs.

In the next match, Suleiman Mirza starred for Bucomac against EITC Cricket Club.

Suleiman returned to trouble EITC with four wickets and a run out. Thanoj Varghese bagged two to bundle EITC out for a meager 100 in 19.3 overs.

In another match, Abhishek Chaturvedi’s (5-19) and Danish Haider’s (3-18) was instrumental in Omega Insurance’s comprehensive five-wicket win over SEWA ‘A’.

After winning the toss, Hazrat Nabi (22) and Babar Ghazanfar (34) gave SEWA ‘A’ an ideal start of 49 runs for the first wicket but once Danish Haider got rid of Nabi and Humayun Ali sent Ghazanfar back to the pavilion the floodgates were open for Abhishek to wreak havoc.

He ripped through the middle order and Haider scalped the last two wickets as SEWA ‘A’ scrambled to 125 in 18.3 overs.

Shane Alam struck an unbeaten 51 from 44 balls (6x4) and Muhammad Asaf gave him company on 20 not out. Ryan Rasheed raced to 28 from 17 balls (2x6, 2x4) as Omega Insurance crossed the line in 17.5 overs. It was a good day for another insurance company. Oman Insurance outplayed Emirates Technical Services by 5 wickets.

Ramada Hotel received a hammering at the hands of OMA Emirates.