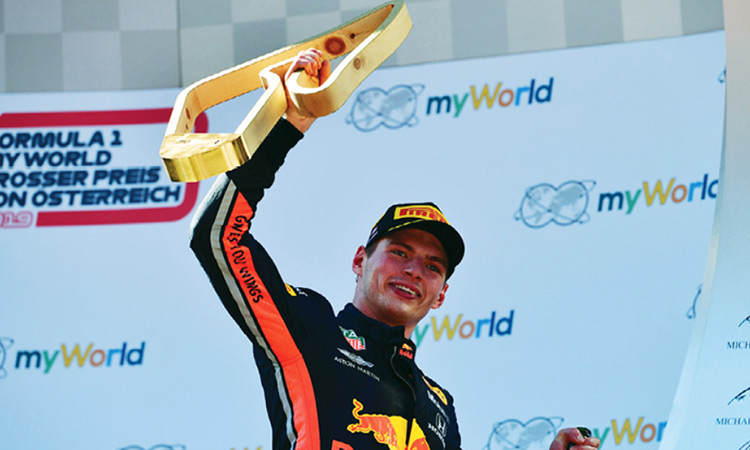 Red Bull’s Max Verstappen celebrates on the podium after winning the Austrian Formula One Grand Prix in Spielberg on Sunday. Agence France-Presse

Max Verstappen overcame a poor start to storm to the sixth victory of his career and end Mercedes’ record unbeaten start to the season when he triumphed in Sunday’s thrilling Austrian Grand Prix.

The 21-year-old Dutchman, who won last year’s race at the Spielberg circuit, recovered after dropping to seventh and charged through to battle past Ferrari’s Charles Leclerc in stirring fashion with two laps remaining.

His dramatic overtaking move was immediately announced as under investigation by the stewards, Leclerc feeling that he was given insufficient space as Verstappen forced him wide off the circuit.

British rookie Lando Norris was an excellent sixth for McLaren ahead of Pierre Gasly in the second Red Bull, Carlos Sainz who finished eighth in the second McLaren after starting from the back of the grid, Kimi Raikkonen and his Alfa Romeo team-mate Antionio Giovinazzi.

“After that start, I thought my race was over,” said Verstappen. “But after the pit-stops we were flying. It was hard racing - and if that’s not allowed, what’s the point in racing in F1. We may as well go home.”

His victory brought Red Bull’s engine supplier Honda their first win since the 2006 Hungarian Grand Prix after returning to Formula One.

Leclerc said: “I had more degradation than I thought at the end - we touched and I had to go wide and I didn’t have a chance to fight back.”

The race, which was a perfect antidote for the sport after the previous week’s dreary procession in France, began in sweltering conditions with an air temperature of 35 degrees and the track at 58, Leclerc making a smooth start from his second pole position to lead into the newly-named Lauda Curve.