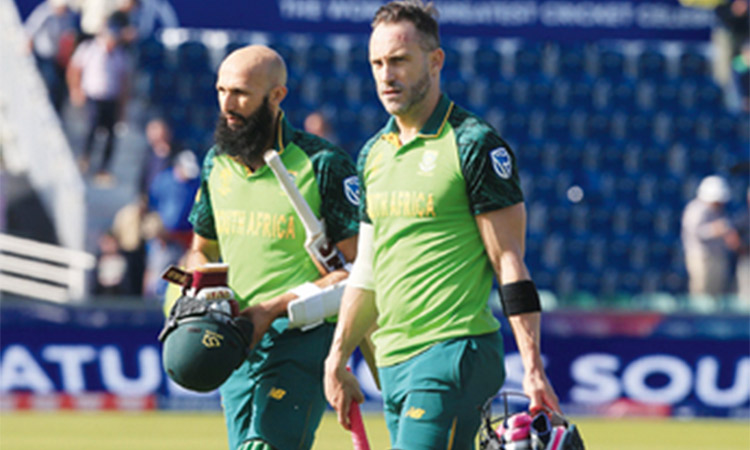 Chester-le-Street: South Africa captain Faf du Plessis said that their win against Sri Lanka came a little too late for their liking in the ongoing World Cup and it doesn’t mean much to them.

Already out of the contention of making it to the semifinals, the Proteas on Friday registered clinical nine-wicket consolation win over Sri Lanka at the Riverside Ground Stadium.

Put in to bat, Sri Lanka managed a modest 203, a target which the Proteas overhauled with 76 balls to spare.

“Long time coming, yeah. It was a good game, we did ourselves justice with the talent we have in that dressing room. Set up by a good bowling performance.

“Dwaine (Pretorius) was exceptional. We’ve been trying to get him into the XI, but it’s a balance thing. The nature of the wicket told me it needed to be straight lines with the ball, and that’s why I brought Dwaine and Andile on early,” du Plessis said in a post-match interview.

“Line and length was harder to face than pace on that wicket. (This win) feels bittersweet. It doesn’t feel like it means that much. It’s a little bit too late,” he added.

Happy with the batsmen who finally came to perform after seven games in the competition, the Proteas skipper said: “But the basics of batting were shown today. We haven’t had guys batting through, and big partnerships, but that was not the case today. One big partnership, and suddenly everything seems so much easier.”

He also admitted the fact that the defeat to Bangladesh early in the tournament affected their confidence and they could not get over it.”

Bangladesh was the one that really took the wind out of our sails.

England were too good for us on that day. Bangladesh really sucker-punched us in the stomach, and then we took that into the next game, the first week really set us back, but we can’t use that as an excuse.”

Meanwhile, Sri Lanka skipper Dimuth Karunaratne rued that his side didn’t come out with a positive approach, especially with the bat which led to their defeat.

“Kusal (Perera) and Avishka (Fernando) batted really well. We struggled to get even singles. If you can’t rotate the strike, it’s not easy. There’s pressure, and then there are big shots. The wicket got better and better, and South Africa batted really well,” he said.

“The pitch was a bit slow, and South Africa bowled really well. They built pressure and kept fielders in the ring. They planned really well. We couldn’t get singles. We needed to get wickets early.

“(Lasith) Malinga started really well, but at the other end we couldn’t build pressure. These are the sorts of things we need to think about and learn from. We have two more games. We have to win those two games. We have to work hard in all three departments. Heads up, and hopefully we’ll do well,” he added.

With just six points from seven games, Sri Lanka are all but out of the tournament. However, they still have a mathematical chance to be in the semifinals. But for that, they first need to win their last two games against already-eliminated West Indies (on July 1) and India (July 6) and then depend on favourable results from other remaining league stage games.