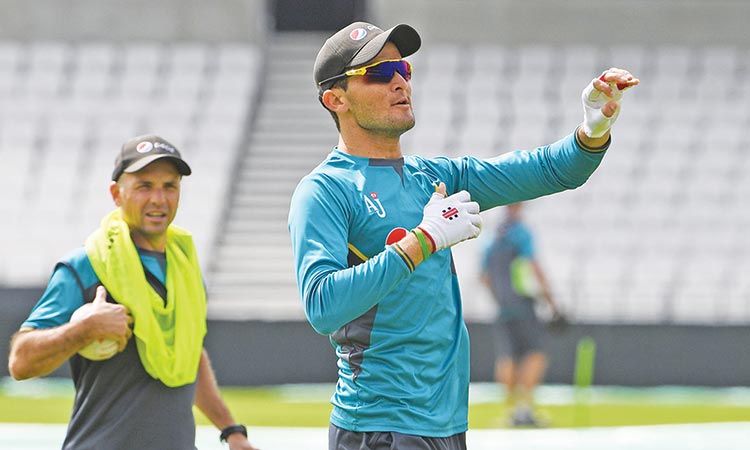 Riding high on confidence after two back-to-back wins, Pakistan will look to carry on the winning momentum when they face Afghanistan in their crucial World Cup encounter at Headingley on Saturday.

A win against Afghanistan will keep Pakistan in the hunt for the semi-final race.

With seven points from seven games, Pakistan need to win both their remaining matches and hope for favourable results in matches of other teams too to make it to the top four by the end of the tournament.

After their defeat to India, the Green Brigade had to face harsh criticism, both from fans and former cricketers. However, they kept aside all those negativities and registered thumping wins over South Africa and New Zealand.

Their last win against the Black Caps would have bolstered their confidence immensely, considering the kind of performance they came out with against the Kiwis who were one of the two unbeaten sides in the tournament till then.

Their bowling looks in firm form with Mohammed Amir, Shaheen Afridi and Wahab Riaz all chipping with crucial wickets.

Their batting has also been bolstered by the inclusion of Haris Sohail who has contributed heavily in Pakistan’s last two wins. Also, with Babar Azam coming to his usual best, one can expect Pakistan to outstage Afghanistan.

Afghanistan, on the other hand, have not been able to register a single win in the tournament so far. Their bowling has looked ok with all their spinners performing. But it’s their batting which has let them down in all the matches.  The batsmen just have not been able to score and it has been a cause of concern for them.

However, with nothing to lose, Afghanistan would hope to enjoy their game and come out with a surprise win against Pakistan, thus hampering their chances of making it to the knockout stage.

Meanwhile, former Pakistan cricketer Basit Ali has claimed that India will “never want Pakistan” to make it to the semi-finals and that’s why the Men in Blue might perform badly and intentionally lose their matches against Bangladesh and Sri Lanka.

Pakistan journalist Saj Sadiq posted a video of Ali making these comments on a TV show on Pakistan-based channel Ary News on Wednesday.

“India will never want Pakistan to make it to the semi-finals. They have matches remaining against Bangladesh and Sri Lanka. Everyone saw the fashion in which they won against Afghanistan,” said Ali, who played 19 Tests and 50 ODIs for Pakistan

“They’ll play in such a way that nobody will come to know what has happened. What happened in India’s match against Afghanistan? What did Australia do against India? What did David Warner do?” asked the 48-year-old as he claimed that India intentionally played poorly against Afghanistan and that David Warner deliberately underperformed against India.

Pakistan, after suffering an embarrassing 89-run loss to India, made a strong comeback in the tournament, defeating South Africa and New Zealand. They have seven points in as many games and are currently locked in a fierce four-way battle for the semi-final spot with England, Sri Lanka and Bangladesh.

In order to qualify for the knockout stage, the 1992 champions need to win their remaining two games against Afghanistan and Bangladesh to be played on June 29 and July 5 respectively.

India, on the other hand, are sitting pretty in the top four with 11 points from six games.