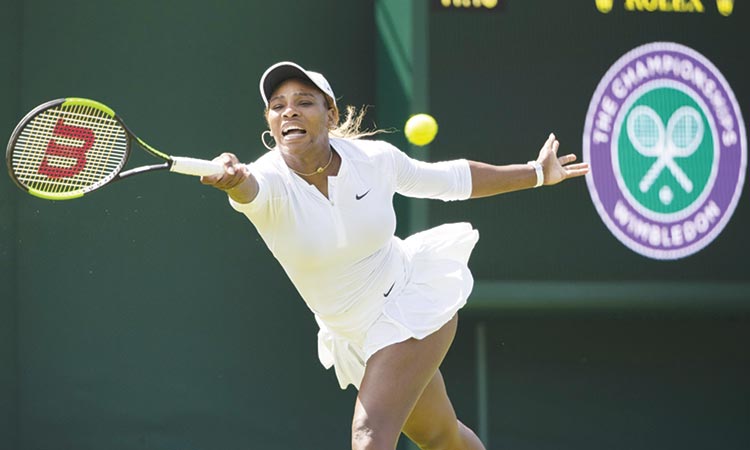 Serena Williams during a training session at Wimbledon on Friday. Associated Press

Rafael Nadal breathed a sigh of relief on Friday after he was slated to meet eight-time champion Roger Federer in the Wimbledon semi-finals.

Nadal’s fears that he would be drawn in top-seeded favourite and defending champion Novak Djokovic’s half of the draw — and face him in the semis — proved unfounded despite Wimbledon promoting Federer above him in the seedings.

The Spaniard, seeded third behind Federer, had complained earlier this week that Wimbledon’s unique formula for seeding that combines ranking points with form in grass-court competitions was disrespectful.

However, the Spaniard’s mood would not have improved after falling foul of Friday’s draw which handed him a potential second-round clash with controversial Australian Nick Kyrgios, who he accused of disrespect earlier this year after losing to him in Acapulco. Kyrgios meanwhile is up against compatriot Jordan Thompson in the first round.

Nadal should have little trouble with his first round opponent, Yuichi Sugita of Japan, but after that things become more perilous.

If Nadal were to see moody but talented Kyrgios, who beat him in the last 16 at Wimbledon in 2014 in a potential second round clash, highly-rated Canadian youngster Denis Shapovalov could be waiting for the Spanish legend in the third round. Considering he emerges from those tussles, he could face Croatia’s 2017 Wimbledon singles finalist Marin Cilic in the last 16.

Nadal, who comes in on the back of his 18th Grand Slam singles title after winning his 12th French Open which included beating Federer in the semi-finals, will do well to reach the last four.

World number one Djokovic will in theory face South African fourth seed and last year’s beaten finalist Kevin Anderson — who was promoted from eighth in the world — in the last four.

While Djokovic begins his campaign against 35-year-old German Philipp Kohlschreiber, Federer opens his against Lloyd Harris of South Africa.

Kohlschreiber beat Djokovic earlier this year in the third round at Indian Wells.

Other standout first-round draws in the men’s singles include fifth seed Dominic Thiem against big-serving American Sam Querrey who reached the semi-finals in 2017.

The most intriguing match-up could come in the fourth round with a rematch of last year’s final between defending champion Angelique Kerber of Germany and American legend Serena Williams. But the story of the first round will surround Serena’s 39-year-old sister Venus drawn to play compatriot Cori Gauff, who on Thursday at 15 years of age, became the youngest woman to qualify for the tournament in the Open era.

Gauff made it into the tournament with a 6-1, 6-1 victory that lasted just 55 minutes in the final round of qualifying on Thursday against Greet Minnen, a 21-year-old from Belgium.

The teenager, who idolised the Wlliams sisters, said of Serena and Venus, “Serena Williams has always been an idol and Venus, I mean, they’re the reason why I wanted to pick up a tennis racket.”

She has already met both of them but will now have the opportunity to test her mettle against one of her heroes.

Gauff, now based in Florida, will be the 12th-youngest player to compete in women’s singles at the grass-court Grand Slam tournament since professionals were first admitted in 1968.

The 11 who were younger all got spots in the draw via direct entry, rather than qualifying.

“I have no expectations really,” Gauff said. “I feel really blessed. My parents never put any limitations on my goals and told my to shoot as high as I can.”

Japan’s Naomi Osaka -- whom Barty replaced as world number one when she won the Birmingham tournament last Sunday -- begins her bid to add Wimbledon to her US and Australian Open titles against Kazakh Yulia Putintseva, who beat her in Birmingham last week.