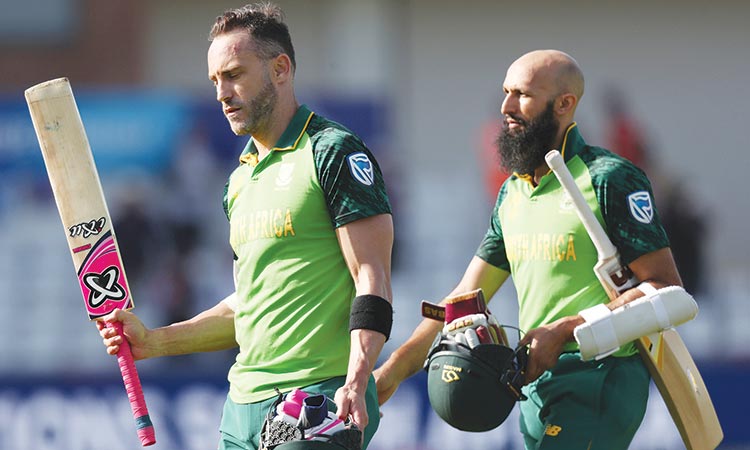 Faf du Plessis (left) and Hashim Amla walk off after South Africa’s victory over Sri Lanka in their World Cup match in Chester-le-Street on Friday. Reuters

Amla (80) and captain Du Plessis (96) put on an unbeaten 175 for the second wicket as South Africa cruised to victory in the 38th over, finishing on 206 for one.

Sri Lanka were struggling after defeats to New Zealand and Australia and two washouts before reviving their World Cup chances with a shock win against hosts England last week.

But, with six points from seven games, the 1996 champions have now slipped behind England, Bangladesh and Pakistan in the race to qualify from the round-robin phase.

“It feels like it’s a long time coming,” said Du Plessis, whose side were already out of contention for the semi-finals before the match.

“It feels bittersweet, it doesn’t feel like it means too much,” he added.

“But the basics of batting were shown today. We’ve not had guys bat long and build big partnerships. One big partnership and everything looks much easier.”

Sri Lanka’s batting let them down against an inspired South African pace attack led by recalled seamer Dwaine Pretorius, who returned figures of 3-25 from his 10 overs.

Playing for pride, South Africa rarely put a foot wrong after electing to field first in Chester-le-Street, bowling out Sri Lanka for 203 in the 50th over.

Sri Lanka had a disastrous start to their innings when skipper Dimuth Karunaratne was caught at slip by Du Plessis off the first ball of the match, delivered by Rabada.

Kusal Perera and Avishka Fernando batted positively to take the score to 67 for one in the 10th over before Fernando (30) mistimed a shot, sending the ball steepling into the air before it was taken by Du Plessis.

Perera (30) was next to go, chopping a Pretorius delivery onto his stumps as Sri Lanka slipped to 72-3 in the 12th over.

Angelo Mathews was bowled by Morris for 11 and Kusal Mendis departed for 23.

A swarm of bees briefly interrupted play towards the end of the innings in the match, forcing the players and umpires to lie flat on the ground.

Veteran paceman Lasith Malinga struck in the fifth over of South Africa’s innings, bowling Quinton de Kock for 15, but it only proved a minor hiccup.

Amla and Du Plessis took control as they mixed the right dose of caution and aggression to blunt the opposition attack.

“We needed to take wickets to stand a chance of winning and build pressure,” said Karunaratne.

“We’ve got to think about that going forward — how we can build pressure and create mistakes.”

South Africa will sign off with a final league match against Australia.

Sri Lanka have two more games — against West Indies on July 1 and India on July 6.