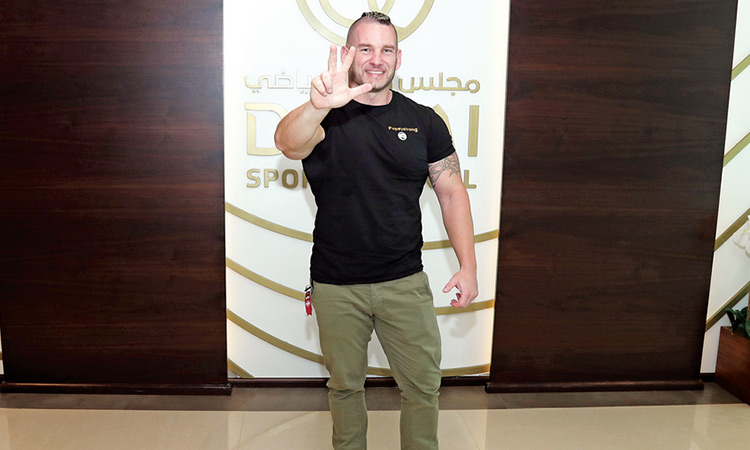 Zsolt Sinka has broken more than 35 records of strength and bodybuilding over the past decade.

Dubai’s status as the new home of Herculean men and their staggering displays of strength is set to receive a major boost in the coming months as the Hungarian “Popeye”, Zsolt Sinka, attempts to create several new Guinness World Records.

The world’s strongest men, including Game of Thrones star Hafthor Bjornsson, were in Dubai last year as the city hosted the spectacular Beasts in the Middle East show, under the aegis of Dubai Sports Council, to pick the World’s Ultimate Strongman.

Earlier this year, World’s Ultimate Strongman announced their WUS Incubator program. Launched in collaboration with Dubai Sports Council and based in Dubai, the WUS Incubator is an innovative, intensive training program that will see young strongmen with potential from across the world travel to the city for an opportunity to train under the best and elevate their level of performance.

Sinka, 38, is hoping to keep that excitement for the sport going with plans to pull a Boeing 777 and an Airbus 380 in the coming months -- not with his body, but with his teeth.

“My plan is to set several new Guinness World Records here in Dubai,” said Sinka during a visit to Dubai Sports Council office along with his wife Monika and 8-year-old daughter Dotti, who is a budding swimmer.

“First, I want to try and pull a Boeing 777 with my teeth. Then, next year, during the Dubai 2020 World Expo, I want to pull an Airbus A380. I think it will be a good promotion during the Expo. After that, I will try and set a new car-pulling record -- maybe six to eight cars. Then maybe, I work with RTA and pull a big bus.

“I also have plans to stage a show on the Burj Al Arab helipad -- I want to block two motorbikes with my teeth. That will be a great show, a great spectacle.”

A resident of Dubai since 2016, Sinka has already pulled a 180-seater Airbus A320 with his teeth, dragging the 50-ton aircraft for 39.2 meters in 52 seconds at Budapest airport. Later, the multi-talented Hungarian, who played football before switching to power sports, dragged a 90-ton A300 cargo plane across 26 metres at the same airport. He has also pulled an 80-ton train with his teeth and has broken more than 35 records of strength and bodybuilding over the past decade.

“Me and Strongman is different,” he said.

“For example, I am not as big as the Strongmen. I weigh maybe a 100kg and my height is 172cm. But, if you take Hafthor Bjornsson, World’s Strongest Man title-winner in 2018, for example, he weighs nearly 200kg and is 206cm. But pulling with your teeth, that is the ultimate feat of strength. Nothing after that.”

He added: “Before I came into this sport, I used to play football. I was also into taekwondo and judo, and I earned a black belt. Then I ventured into powerlifting, where I won the world championship twice. I am also a four-time bench press world champion. I have done 325kg in bench press, 405kg in squat and a deadlift of 475kg.

“It was a huge event and became big news around the world. The news was everywhere -- on BBC, CNN, New York Times and all the newspapers here in the UAE. After that I thought, ‘Hmmm, 50 tons is not too much. So let’s try 90 tons now’.”

During those years of breaking strength records, Sinka had a chance to visit Dubai for a motor show and he instantly fell in love the city.

“I first came to Dubai eight years ago, and then I started coming here regularly for shows and performances,” he said.

Three years ago, Sinka -- who takes no special care of his teeth except washing it four or five times a day -- decided to pack his bags and leave his home country and take up residence in Dubai with his family.

“I decided to move to Dubai because Dubai is No1,” he said.

“You have landmarks like Burj Khalifa, Burj Al Arab, Atlantis and Skydive, and you have some of the world’s top sporting events taking place here. Then you have all these Festivals taking place here through the year. So there are many, many events here and we all love it here. This is home now.”