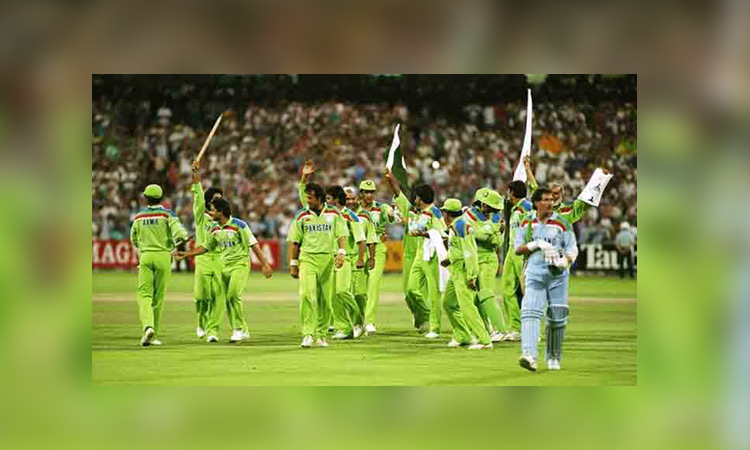 Former captain Waqar Younis says it is becoming "impossible to ignore" the parallels between Pakistan's World Cup resurgence and their 1992 triumph.

Twenty-seven years and a generation apart, Pakistan’s World Cup bears striking similarities with their 1992 campaign — when they started slowly but ended up lifting the trophy in Melbourne.

An identical sequence of wins and losses, and other eerie parallels, have struck a chord with millions of fans who believe that Pakistan could be set to come out on top once again. 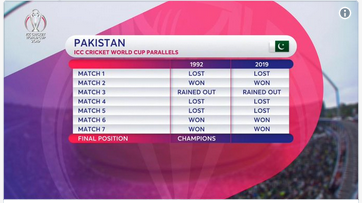 In both World Cups, Pakistan started with a one-sided defeat to the West Indies, before recovering to win their second game —against Zimbabwe in 1992, and England this time around.

At both tournaments, their third game was rained off and they then went on to lose their next two games and win the following two.

Victories against South Africa and New Zealand in the past week have breathed new life into Pakistan's bid to reach the semi-finals in England and Wales after they won just one of their opening five fixtures.

Their trajectory through the tournament has so far mirrored that of their only World Cup triumph to date, when they started slowly in 1992 before picking up pace to lift the trophy. 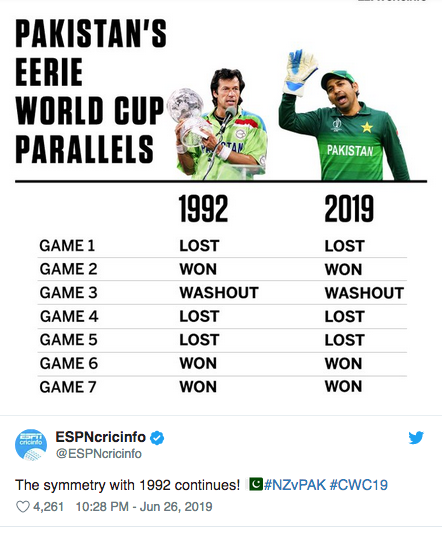 "It is becoming impossible to ignore the parallels with 1992," said Waqar in a column for the International Cricket Council.

"The similarities are freaky and even though the players won't have been thinking about it, there is no way they can put it out of their minds altogether."

Pakistan's chances of reaching the last four have been helped by England's defeats to Sri Lanka and Australia.

The hosts now need to win both their remaining games against India and New Zealand to hold off Pakistan, should Sarfaraz Ahmed's men beat Afghanistan and Bangladesh in their final two matches.

"It's moving in the direction that they might qualify and, if it does, that would be something very special if they could win the World Cup," said Waqar.

The prolific fast bowler was robbed of his role in the tournament 27 years ago due to a back injury.

But he is hoping for a repeat of the scenes of joy witnessed when the team returned victorious to Pakistan, for a nation that has seen little international cricket since Sri Lanka's team bus was attacked in 2009.

"It was heartbreaking, especially when we won," said Waqar of missing the 1992 World Cup.

"I was over the moon though and I still remember every second when the team came back from Australia. It was wonderful. I'm hoping and praying that something similar happens again."

Not only that, but the final win in both sequences was against New Zealand, who were unbeaten in both 1992 and 2019 until they ran into Pakistan. 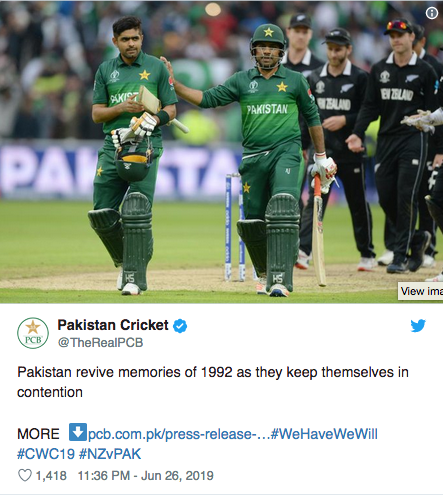 "It was same, the same sequence of results, points and then we wanted Australia to beat the West Indies for us to qualify," said legendary fast bowler Wasim Akram, who played for Pakistan in 1992.

"Then also we beat New Zealand -- who was unbeaten then too. A lot of similarities, I hope the end result is also similar now and we win the World Cup," said Wasim, now a TV commentator.

In another similarity, Wasim was the leading wicket-taker in 1992 with 18 and another Pakistan left-arm pacer, Mohammad Amir, is second on the bowler’s chart with 16 so far.

Fans are now hoping that the similarities don’t end there, and even that they continue beyond the World Cup.

"Imran Khan was Pakistan captain in 1992 World Cup and 26 years after that triumph he became country’s prime minister, so Sarfaraz should also join politics and become premier in 2045," said one comment on social media.