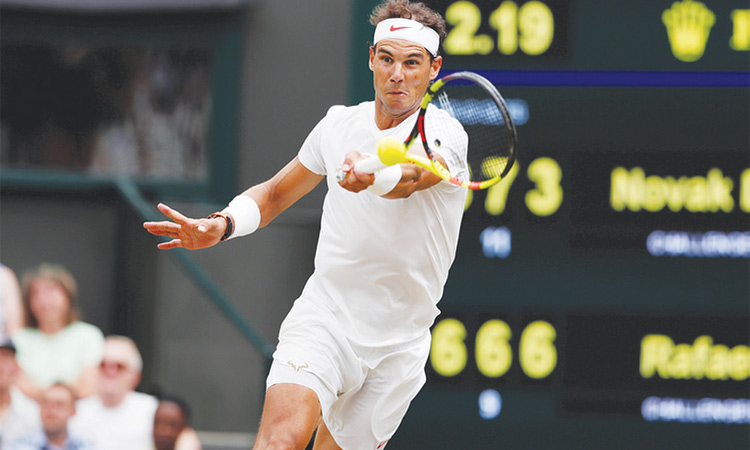 Rafael Nadal has criticised Wimbledon’s unique seedings formula, which could hinder his chances of a third title when the tournament starts on Monday.

Rafael Nadal has complained about Wimbledon’s seeding system after the Spaniard was placed at number three, behind Roger Federer, for next week’s grand slam in London.

The other three major tournaments all match their seeding to the official world rankings but Wimbledon uses its own formula to dictate the order, combining ranking points with form in grass-court competitions.

It means Nadal will be seeded three and Federer two at the All England Club this year, despite their positions being the reverse in the rankings list.

“Wimbledon is the only tournament of the year that does it like this,” Nadal told Spanish television channel Movistar on Monday night.

“Obviously it would be better to be two than three but if they think I have to be three I will accept three and fight to win the matches I have to win.

“Having said that, the only thing that doesn’t seem right about this issue is that it is only Wimbledon that does it. If they all did it, it would seem more correct.

“It’s not only about my particular case. There have been many occasions when players have played well all year on all surfaces but Wimbledon does not respect the ranking they have earned.

“And for this reason they get more complicated draws.”

Nadal is yet to play an official match on grass this year while Federer warmed up for Wimbledon last week by winning his 10th title at the grass-court tournament in Halle.

Federer and top seed Novak Djokovic will be at opposite ends of the Wimbledon draw, separated until the final, but Nadal is guaranteed to have either Federer or Djokovic in his half, and could meet them in the semis.

“For me personally, it means if I am three, to get to the final, Djokovic or Federer will be in my half,” Nadal added.

“But that can only happen in the semi-finals and to get there I have to win five matches. Today I’m far away.”

Nadal claimed his 18th major title earlier this month by winning the French Open for a record-extending 12th time. He now sits behind only Federer’s 20 grand slam triumphs in the all-time list of male champions.

Meanwhile, historically, emotionally and statistically, Federer remains the man to beat at Wimbledon even at the 21st time of asking.

Forget the creaking knees and advancing years — the Swiss will be 38 in August — not many in SW19 will bet against their adopted favourite achieving Wimbledon history with a ninth men’s title to equal Martina Navratilova’s record singles mark. Victory would consolidate his position as oldest male champion, a record he set in 2017 when he won his eighth title without dropping a set at the age of 35 years and 342 days.

Federer’s cheerleaders will point to the confidence gleaned from 2019 tournament wins on the hard courts of Dubai — his 100th ATP title — and Miami.

This year’s Wimbledon lead-up has been wrinkle-free after a positive showing at the French Open, where he lost in the semi-finals to Nadal, and his traditional grass tune-up at last week’s Halle Open, where he triumphed for the 10th time.

But look through the glass differently and 2019 may tell a whole new story.

Perhaps Federer’s decision to compete at Roland Garros for the first time in four years was actually an acknowledgement that his great powers are waning.

Federer knows that every opportunity to boost his Grand Slam tally of 20 trophies must be grasped or risk being eclipsed by the rejuvenated Nadal.

The Spaniard’s victory in Paris took his Grand Slam total to 18 while Novak Djokovic has won three of the last four blue-riband events to bring his career tally to 15.

It is possible to make a strong case for all three, with Nick Kyrgios last week making special mention for Federer, whom he predicted will “be hard to beat” on his favourite surface.

Former French Open finalist Alex Corretja is another who has flagged up Federer.

“Federer played a great claycourt season, which gives him the belief he can win Wimbledon again,” said the Spaniard.

Grass has always suited Federer’s aggressive style, which is based on footwork, pace and ability to find sharp angles.

Perhaps the only remaining question is whether the Swiss has the stamina to slug it out against the game’s young guns.

As always the aim remains to win but now it is to do so without expending too much energy.

Last year there were signs that the balance is more difficult to achieve and the eight-times champion squandered match points against Kevin Anderson before exiting in the quarter-finals.

Despite Anderson’s raw power, few at Wimbledon expected Federer to lose that day because for so many years Wimbledon victories came so naturally.

All that can be said with certainty is that should anyone beat the man who has already pocketed $124 million in prize money, he should consider himself champion in waiting.