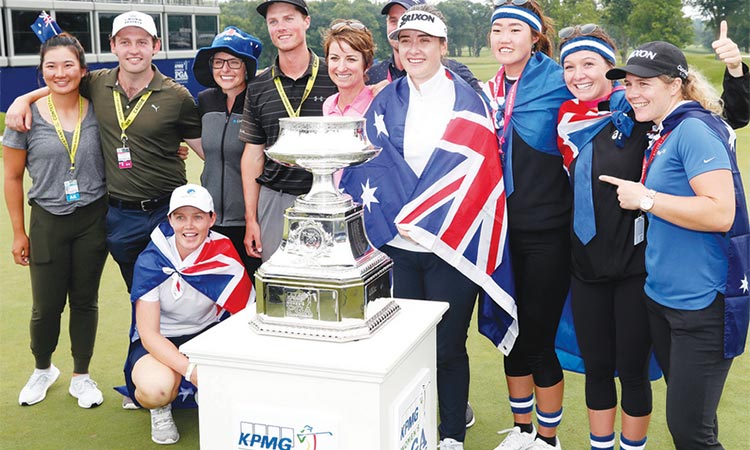 Hannah Green poses with her Australian supporters after winning the Women’s PGA Championship at Hazeltine National Golf Club in Chaska on Sunday. Reuters

Chez Reavie ended a near-11-year title drought Sunday, firing a one-under 69 for a four-shot victory in the US PGA Tour Travelers Championship.

Reavie couldn’t repeat the seven-birdie back-nine surge that saw him power to a six-shot lead on Saturday, two birdies and a bogey were enough to deliver the American’s second career title at TPC River Highlands in Cromwell, Connecticut.

With a 17-under par total of 263 he finished four strokes in front of Zack Sucher and Keegan Bradley, who both carded 67s for 267.

“It means everything,” said Reavie, who won his only prior Tour title at the 2008 Canadian Open — 10 years and 10 months ago.

“I started from the ground up, had wrist surgery, got a swing coach to help take pressure off my wrist and kind of slowly built my foundation — and here we are,” said Reavie, who was coming off a tie for third at the US Open last week.

“Staying patient, sticking to my game, hitting fairways and hitting greens and giving myself a lot of birdie opportunities,” he said of the key to the comeback.

The 37-year-old withstood a charge from former PGA Championship winner Bradley, who birdied 10, 11, 13 and 15 to pull within one shot of the lead as Reavie — who had a birdie and a bogey on the front nine — couldn’t find a birdie until the 17th.

After missing birdie attempts from 10 feet at 15 and 16, he landed his second shot at the 17th 14 feet from the pin and rolled that in, his cushion even greater as Bradley ended up with a double-bogey from a fairway bunker at the same hole.

Journeyman Sucher, who held the 36-hole lead, was two-over on the front nine but grabbed his share of second with five birdies coming home.

Hannah Green claimed her first major championship on Sunday, the Australian going wire-to-wire and holding off a pack of marquee players to win the Women’s PGA Championship by one stroke.

The 22-year-old Green, who had never won on the LPGA Tour before, sank a four-foot putt for par on the final hole for an even-par 72 and a one-stroke victory over defending champion Park Sung-hyun.

Green overcame an middle round wobble with three bogeys in four holes, but then got back on track with a long birdie putt on 16 to become the first player to win the event wire-to-wire since Taiwan’s Tseng Yani in 2011.

Park, who birdied her final hole to get to eight-under overall and put added pressure on Green’s finish, fired a four-under 68 on Sunday.

Green had a one-shot lead going into the final round as she sat on a 54 hole lead for the first time in her career with no less than four major champions within striking distance, comprising Park, Ariya Jutanugarn, Park In-be and Danielle Kang.

England’s Mel Reid shot a six-under 66 to finish in a tie for third with American Nelly Korda (71) on six-under 282.

Kang, who won this event two years ago, finished in a tie for fifth with fellow American Lizette Salas, at five-under 283.

Meanwhile, Italy’s Andrea Pavan beat Matthew Fitzpatrick in a play-off on Sunday to win his second European Tour title at the BMW International Open in Munich.

The world number 133 fired a six-under-par final round of 66 to set a clubhouse target of 15-under for the tournament, but England’s Fitzpatrick birdied the 18th hole to force a play-off.

Pavan birdied the second sudden-death hole, though, carving an excellent short iron out of the rough to just a few feet from the flag as Fitzpatrick failed to get up and down from a greenside bunker.

It was the 30-year-old’s second Tour victory after also triumphing at last year’s Czech Masters.

“It’s amazing. I thought I had a chance starting the day,” he told europeantour.com.