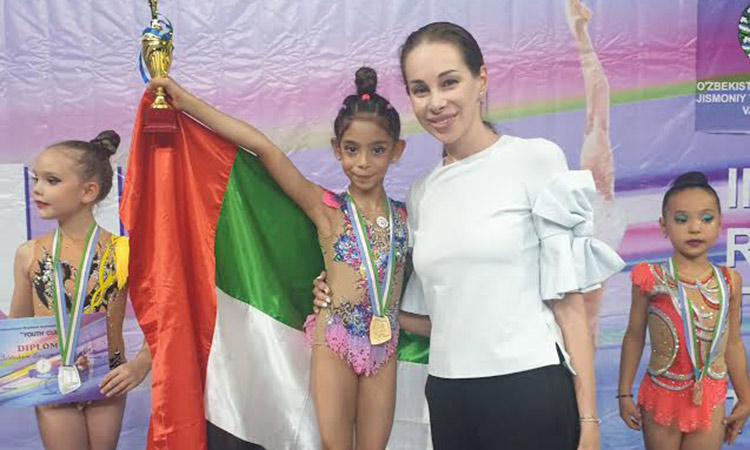 Known as the UAE’s little wonder, the eight-year-old clinched top honours at the International Rhythmic Gymnastics Youth Cup held in Tashkent, Uzbekistan, which concluded on Sunday.

Lamia finished on top of the A category for junior girls with a total of 21.8 points to take the yellow metal.

The International School Choueifat student bagged 12.7 points in the freehand routine and another 9.10 points in the hoop apparatus routine to end on the top of the podium yet another time.

Alexsandra Klishina from the Almaty RG Club took the silver, while Samira Yuldasheva from the YUSC Club clinched bronze.

More than 300 participants from different countries took part in the event.

The annual event was organised by the Rhythmic Gymnastics federation of Uzbekistan and gymnasts from Russia, Kyrgyzstan, Kazakhstan and Uzbekistan competed for the coveted prize.

Lamia, who dreams of the winning gold for UAE at the Olympics, became the first Emirati to take part in the competition and finishing on top.

To compete at the Tashkent championship Lamia, who is in grade 2, had to skip her exams. Lending support to the athlete, the school allowed her to take her tests upon her return.

Her team-mate Alexandra Stadden, a British National representing the UAE, also won Gold in her age group 2009 in category B, which ensured the UAE a stronger representation in Uzbekistan last night.

Lamia, who won gold medal in the International Gymnastics Championships in Greece in 2018, and the silver medal in Germany, 2017, became the youngest Emirati to win the prestigious Mohammed Bin Rashid Al Maktoum Creative Sports Award.

Lamia, who is trained by Ksenia Dzalaghaniya, made her debut and won gold at the inaugural Dubai International Junior Rhythmic Gymnastics Championships held at the Al Habtoor Indoor Complex in 2017.

Lamia has been training constantly for the past three years with the aim of being eligible for the Youth Olympics in 2026 and representing the UAE for the first time in the sport of Rhythmic Gymnastics.

She is scheduled to attend an exclusive training camp in Latvia during the summer to learn from Olympic Coach Amina Zaripova herself.

According to her coach Dzhalaganiya, Lami’s global acclaim paves the way for other Emirati girls and can encourage parents to see a future for their children in sports.

Her success on the local and global stage has already secured her a role as a brand influencer for the Dubai Women’s Run in 2017.

While Lamia stands out as a leading example for young girls in the region, but it hasn’t come easily for her. Training since she was five, Lamia goes to school full time while training 20 hours every week at the Dubai Youth Olympic School.

Understandably, her parents are her biggest fans and have helped AlFarsi pursue her dreams despite criticism from the wider family who took issue with the costumes and daring feats involved in the sport.