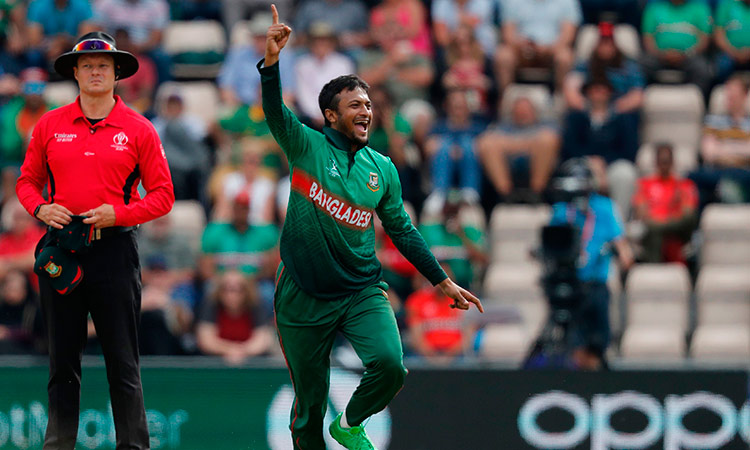 Shakib Al Hasan's stellar all-round show on Monday helped Bangladesh stay in the race for a World Cup playoff spot. They beat Afghanistan by 62 runs in their 2019 ICC World Cup group stage encounter at Southampton's Rose Bowl and Shakib scored 51 off 69 balls before becoming the first Bangladeshi player to record a five-wicket haul in the tournament's history.

Chasing a target of 263, Afghanistan were limited to a total of 200. They got substantial partnerships from their top order and were 104/2 at the start of the 29th over when Shakib dismissed Gulbadin Naib (47) and the dangerous Mohammad Nabi (0) off alternate deliveries. Earlier, he was also the man who gave Bangladesh the breakthrough by dismissing Rahmat Shah in the 11th over. 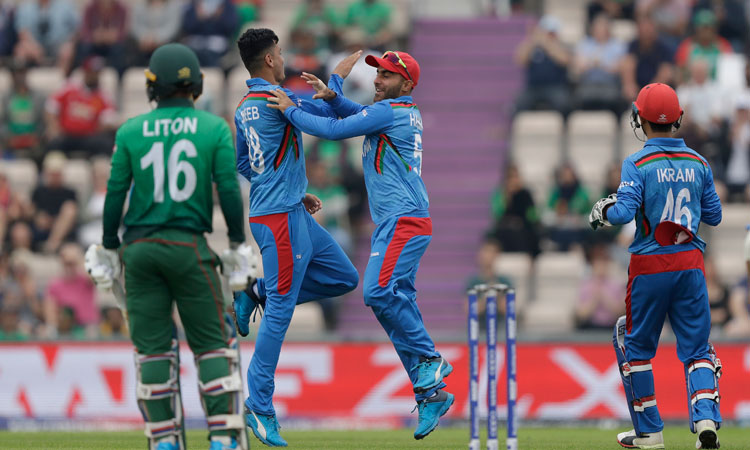 Hashmatullah Shahidi (third left) celebrates with bowler  Mujeeb Ur Rahman during the match against Bangladesh. Reuters

Three overs later, Asghar Afghan became the fourth man to fall to Shakib and Afghanistan suddenly found themselves with half their batting lineup back in the hut. Shakib's next wicket was that of Najibullah Zadran (22) which ended a 56-run stand between him and and Samiullah Shinwari. This made Shakib the first allrounder to have 10 wickets to his name in World Cups while also scoring over 400 runs. He is also only the second player to have scored a 50 and taken five wickets in a World Cup match.

Earlier in the day, Shakib was outdone by wicketkeeper Mushfiqur Rahim in the batting department. Mushfiqur scored 83 off 87 balls and his partnership of 61 with Shakib set the foundation for Bangladesh's total. Mujeeb Ur Rahman was Afghanistan's highest wicket taker with three scalps which were those of opener Liton Das, Shakib and Soumya Sarkar.