Morgan urges England to hold their nerve after Lanka defeat 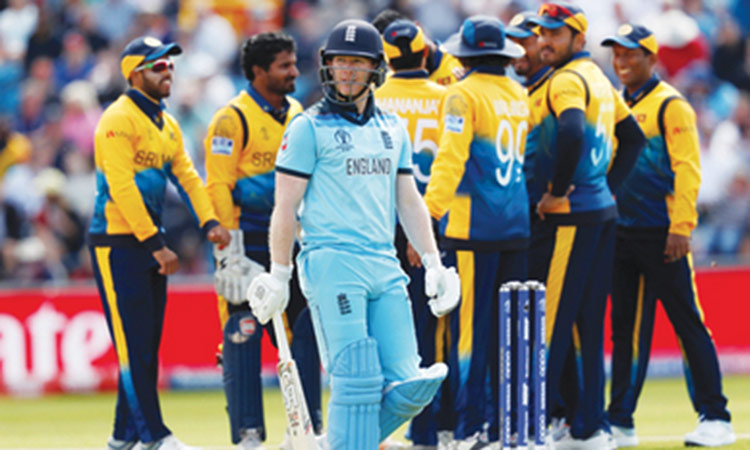 England’s defeat to Sri Lanka was their second pool loss after a 14-run defeat by Pakistan, but Morgan is refusing to panic.

Eoin Morgan urged England to revert to type after a shock World Cup defeat by Sri Lanka cast doubt over their ability to reach the semi-finals.

Friday’s 20-run loss at Headingley means England could have to win all three of their final group games against champions Australia, India and New Zealand in order to secure a last four spot.

Worryingly for England, they have not defeated any of that trio at a World Cup since 1992, although they did manage a tie with India in Bangalore eight years ago.

Sri Lanka’s total of 232-9 did not appear to leave England, yet to win the World Cup, with an especially stiff chase on Friday.

But, with veteran paceman Lasith Malinga taking 4-43 and England tossing other wickets away, it proved enough despite Joe Root’s grafting 57 and all-rounder Ben Stokes’ unbeaten 82, with England bowled out for 212.

“You look at the basics of a run chase,” said Morgan. “Partnerships are very important, we struggled to get enough partnerships going.

“We had a couple of individual innings but that’s not good enough to win a game.”

This was England’s second pool loss after a 14-run defeat by Pakistan, but Morgan is refusing to panic.

“We are going to lose games in the group stages. We didn’t deserve to win the game, we still need to go back to the process that’s taken us to being a strong side in the world,” he said.

England were hampered in their chase by the ongoing absence of in-form opener Jason Roy with a torn hamstring.

“But that’s not why we lost the game. We bat all the way down,” Morgan said.

England’s next match against Australia, who are currently top of the World Cup standings, at Lord’s on Tuesday was always going to be a high-profile encounter.

But the stakes for England have been raised by a fourth successive loss to Sri Lanka in as many World Cups.

Morgan, however, insisted: “The message is quite simple: we need to do the basics along with the way that we play as well.

“When we get beaten we tend to come back quite strong. Let’s hope that’s the case on Tuesday.”