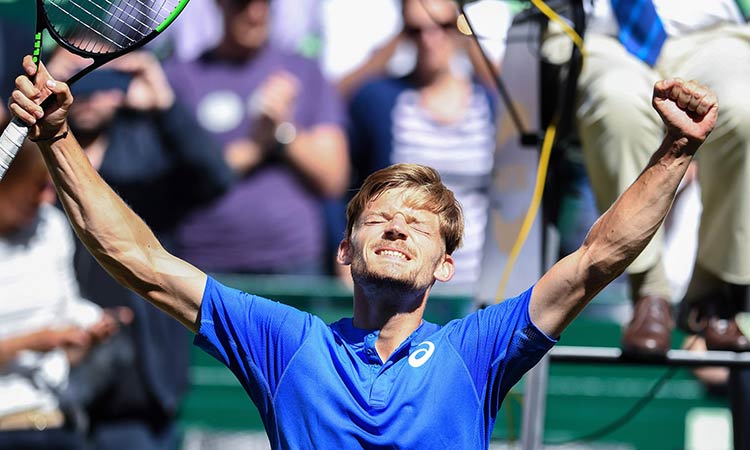 David Goffin exults after winning his match against Alexander Zverev in Halle on Friday. Agence France-Presse

Roger Federer beat Spaniard Roberto Bautista Agut in three sets 6-3, 4-6, 6-4, to enter the semi-final of the grass tournament in Halle, Germany on Friday. The Swiss maestro Federer had previously sent John Millman and Jo-Wilfried Tsonga home to hunt for his thirteenth spot in the finals in Halle.

Earlier, World number five Alexander Zverev crashed out of the tournament in a surprise 6-3, 1-6, 6-7 (3/7) quarter-final defeat by Belgium’s David Goffin.

Home favourite Zverev was playing with a swollen knee after slipping and hurting himself in the first round, and the Halle crowd watched on in dismay as he struggled to find his rhythm against world number 33 Goffin.

The 22-year-old served nine double faults in a rollercoaster match, and survived two match points in the third set before ultimately losing in the tiebreaker.

The defeat compounds a disappointing grass season so far for Zverev, who suffered another early exit on home soil in Stuttgart last week at the hands of compatriot Dustin Brown.

The German will be hoping to rediscover his form and fitness in time for the beginning of Wimbledon on July 1.

Goffin will face Italian talent Matteo Berrettini in the semi-finals on Saturday.

Berrettini, 23, won his third ATP title of the season in Stuttgart last week, and has soared up to 22 in the world rankings this year.

Meanwhile, Canadian teenager Felix Auger-Aliassime laid down a marker for Wimbledon as he claimed the scalp of Greek top seed Stefanos Tsitsipas at Queen’s on Friday with an impressive 7-5, 6-2 victory.

At 18, Auger-Aliassime becomes the youngest Queen’s semi-finalist since Australia’s Lleyton Hewitt at the same age in 1999.

The Canadian may have been seeded lower, but he owns a perfect record against Tsitsipas with three victories as a junior and now two on the ATP Tour.

Tsitsipas -- two years older than his opponent -- ruefully admitted he is going to have to find a magic formula to beat Auger-Aliassime.

“He’s the most difficult opponent I’ve ever faced, and I think it’s gonna take a couple of tries to beat him,” said Tsitsipas.

Auger-Aliassime and Tsitsipas contested a hard-fought first set before the young Canadian took it 7-5, breaking the Greek’s serve in a game that saw the top seed hit the grass twice.

Auger-Aliassime raced into a 3-0 lead in the second with his opponent unusually listless and struggling at the changeover as he received treatment from a medic.

Earlier, Daniil Medvedev became the first Russian to reach the last four at Queen’s in the Open era -- where he will play Frenchman Gilles Simon -- as he outplayed Argentina’s Diego Schwartzman, the fourth seed running out a 6-2, 6-2 winner.

Schwartzman’s hopes of repeating his impressive win over defending champion Marin Cilic in the second round were quickly doused by Medvedev, who broke in the first game of the match and then in the fifth and then did the same again in the second.

Britain’s Andy Murray came through his first match since a career-saving hip operation with an impressive victory in the Queen’s doubles.

Murray, 32, was seemingly set for retirement before having his hip resurfaced in January.

Five months later the Scot was back on court alongside Spain’s Feliciano Lopez at the Queen’s.

French Open champion Ashleigh Barty extended her excellent winning streak to 10 straight matches at the Nature Valley Classic on Friday, as the No.2 seed defeated seven-time Grand Slam champion Venus Williams, 6-4, 6-3, to reach the semi-finals of the grass-court event.

World No.2 Barty is still in the hunt to claim the World No.1 ranking for the first time after her 85-minute victory over former World No.1 Venus. Barty needs to win the title to reach the summit of the WTA rankings on Monday; otherwise, Naomi Osaka will retain her position as World No.1.

Next up for Barty will be Barbora Strycova, the Birmingham runner-up in 2014 and 2016 and a semi-finalist last year. Strycova won an all-Czech clash over qualifier Kristyna Pliskova earlier on Friday.