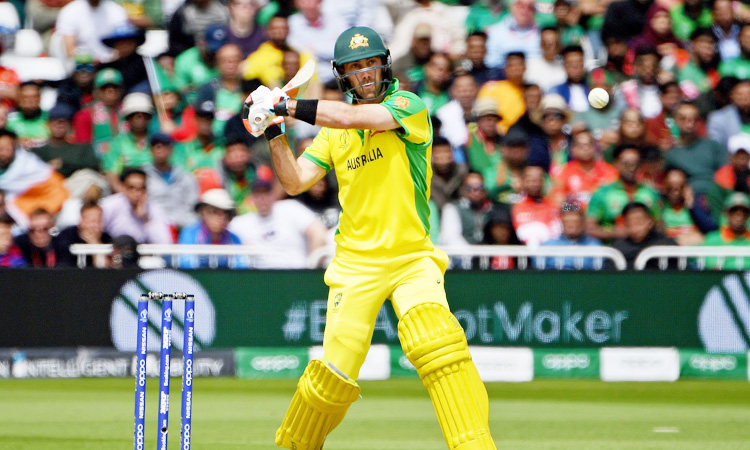 Glenn Maxwell plays a shot during the match between Australia and Bangladesh at Trent Bridge in Nottingham, England, on Thursday. Paul Ellis/ AFP

Glenn Maxwell reckons Australia have no need to fear England fast bowlers Jofra Archer and Mark Wood at the World Cup given they face Mitchell Starc and Pat Cummins in the nets.

The old rivals meet at Lord’s on Tuesday for a group match in what could be a preview of the final given both sides are on their way to the last four.

“I think they’ll be more excited by that (Archer and Wood’s speed) than someone bowling 120s (kph, 74 mph),” Maxwell said.

“That sort of pace suits our batting line-up a bit more — a bit more pace on the ball and something we’re a bit more used to.

“It’s a challenge we’re up for,” he added. “We certainly get enough practice in the nets, that’s for sure.”

But ahead of England’s group game against Sri Lanka at Headingley on Friday, an admiring Maxwell hailed Archer as a “hell of an athlete” and a “quality package.”

Maxwell was speaking after Australia beat Bangladesh by 48 runs to go top of the table in the 10-team round-robin group phase of the World Cup.

Australia ultimately proved too much for the Tigers after compiling a total of 381-5 at Trent Bridge on Thursday, with David Warner’s 166 seeing him become this tournament’s leading run-scorer.

Maxwell added late impetus with a stunning 32 off 10 balls, including three sixes, before he was run out after a mix-up with Usman Khawaja.

Yet with left-handed opener Warner taking 110 balls to reach three figures, not everyone was happy, with Australia great Shane Warne bemoaning the team’s “conservative” approach in a series of Twitter posts.

“Ps I still believe Australia can challenge India & England for the World Cup trophy, but not with this game style or batting order,” Warne said.

“Awesome from Maxwell & a stunning 100 from Warner too. Khawaja doing great, but ridiculous he didn’t run,” added the outstanding leg-spinner, a key member of Australia’s 1999 World Cup-winning side.

“Why wasn’t this happening 20 overs ago? As I said in previous tweets, Aust has the firepower but have decided to play conservatively till the last 10 overs! Why?”

But Maxwell, told about Warne’s tweets by reporters, said: “I think we went at 13s (runs per over) for the last 14 overs so I don’t think we went that bad.”

Warner, now the first batsman with two scores of 150 or more in World Cup matches, took a more conciliatory view.

“I always respect what Warne says,” he said. “For us it’s about going out there and doing the best we can.

“And whether or not we’re batting slow or fast, I think you’re going to get some form of criticism somewhere.”

Warner added: “But I felt the way we batted today (Thursday), we tried to take it as deep as we did and we ended up getting 380.

“That’s just the way we’re playing at the moment and we can only adapt to the conditions that are in front of us.”