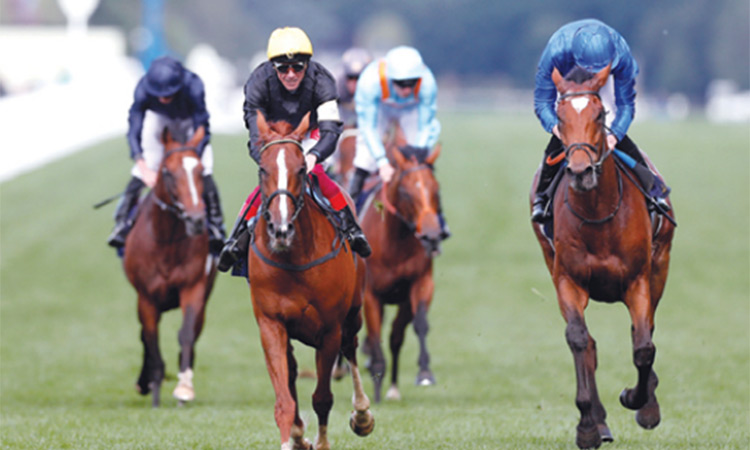 Stradivarius, ridden by Frankie Dettori, leads the pack on his way to winning the Gold Cup at the Royal Ascot on Thursday. Reuters

Dettori, who is on course to sweep the six race card having won all four races, had him in perfect position throughout the race.

Once the 48-year-old Italian extracted him from a little bit of trouble in the finishing straight and hit the front there seemed little danger to the John Gosden-trained star stayer.

Dettori performed his trademark flying dismount before modestly praising the horse -- who is on course for a second successive million pound bonus if he adds the Goodwood Cup and Lonsdale Cup at York.

“What a horse, he got me out of trouble,” said Dettori.

Gosden, who had got off the mark for the week earlier when Dettori rode Star Catcher to victory in the Ribblesdale Stakes, said both horse and rider were exceptional.

“Full marks to a remarkable horse,” said Gosden. He’s an athlete and he’s a charming horse to be around. This 48-year-old kid (Dettori) take this to another level, like a Wimbledon semi-final and final. He’s riding quite beautifully.”

Gosden and Dettori go back a long way and it was the Cambridge graduate trainer who offered him a way back after a wayward time which included a ban for taking cocaine. Gosden, though, said sometimes his mentor-like approach goes in one ear and out the other.

“He occasionally listens to me, but not too much.”

Both long time pacesetter Dee Ex Bee and rank outsider Master of Reality stuck to their task but they could not find an extra gear to overhaul Stradivarius.

Melbourne Cup winner Cross Counter had looked full of running coming round the bend but his challenge petered out and he finished fourth.

Classic heroine Castle Lady goes for a second G1 victory over a mile in the Coronation Stakes, the feature race on day four of Royal Ascot on Friday.

Meanwhile, the unbeaten daughter of Shamardal announced herself as one of Europe’s top three-year-old fillies when staying on strongly to beat subsequent G1 Prix de Diane runner-up Commes by a nose in the G1 Poule d’Essai des Pouliches at Longchamp, France, on May 12.

Castle Lady also won over a mile at Longchamp in the G3 Prix de la Grotte in April and started out with an easy success in a Polytrack newcomers’ race over the same distance at Chantilly in March.

Mickael Barzalona, on board for both of Castle Lady’s Longchamp victories, takes the ride again on the Henri-Alex Pantall-trained filly, who faces nine rivals headed by Hermosa, winner of both the English and Irish 1,000 Guineas.

“He feels that she has improved since the Poule d’Essai des Pouliches and is at her optimum racing weight.