Zverev negotiates ‘tricky’ first round in Halle as Konta cruises 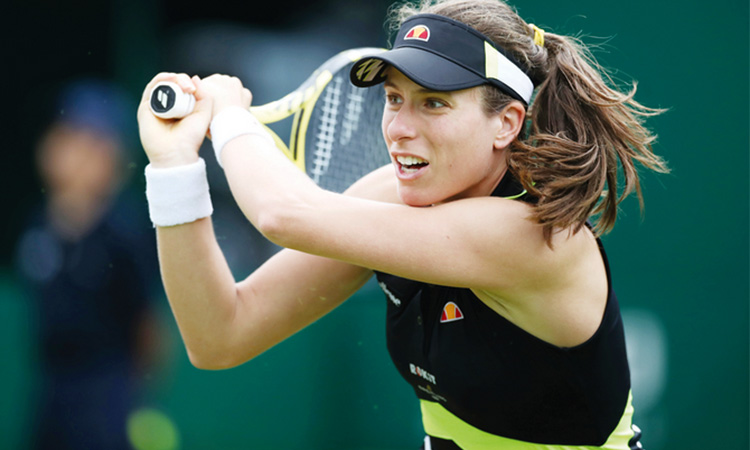 Borna Coric made a good start to his Noventi Open title defence on Tuesday, defeating 2018 Next Gen ATP Finals qualifier Jaume Munar 7-6(2), 6-3 to reach the second round.

One year ago, Coric made a stunning run at this ATP 500 tournament, defeating then-World No. 3 Alexander Zverev in the first round and nine-time champion Roger Federer in the final. The 22-year-old is trying to win an ATP Tour title for the third consecutive year.

The turning point of the match came when Coric faced two consecutive break points at 3-4 in the second set. If Munar would have converted those chances, he would have served for a one-set lead. But Coric carved a forehand drop shot and then hit a big kicking first serve out wide to get back to deuce, and he never looked back from there.

Those were the only break points Munar earned in the match. On the other hand, Coric took full advantage of the only break point he earned, breaking for 3-1 in the second set with a big backhand down the line that forced an error. The World No. 14 triumphed after one hour and 25 minutes when Munar couldn’t put a forehand return in play.

Coric will play Portuguese No. 1 Joao Sousa, who beat Hubert Hurkacz on Monday, in the second round. It will be their first FedEx ATP Head2Head meeting.

German star Alexander Zverev said he needed more practice on grass after beating Dutchman Robin Haase 6-4, 7-5 to reach the second round of the ATP tournament in Halle on Monday.

Second seed Zverev came back from 5-2 down in the second set to record his first grass court victory of the season, following an early exit in Stuttgart last week.

World number five Zverev, who won the ATP Finals in London last year, is among the favourites in Halle alongside nine-time winner Roger Federer

Federer faces Australia’s John Millman in his first-round game, while Zverev can now prepare for a second-round clash with American Steve Johnson, who beat Philipp Kohlschreiber 6-3, 6-3 earlier in the day.  Third seed Karen Khachanov is also in the second round after beating Serbia’s Miomir Kecmanovic 7-6 (7/5), 6-4. France’s Pierre-Hugues Herbert sprung a minor surprise as he beat veteran compatriot Gael Monfils 7-6 (8/6), 6-4.

Meanwhile, Johanna Konta made a seamless transition from clay to grass by easing into the second round of the Birmingham Classic with a 6-4, 6-2 win over Estonian Anett Kontaveit on Monday.

Konta was making her first outing since reaching the French Open semi-finals and the seventh seed maintained her fine form to outclass the world number 20 in an hour and 12 minutes.

World number three Karolina Pliskova also eased into round two with a 6-3, 6-4 win over Romanian Mihaela Buzarnescu. Russia’s Margarita Gasparyan pulled off an upset in the opening contest of the day, defeating fourth seed Elina Svitolina 6-3 3-6 6-4.

Fifth seed Aryna Sabalenka also exited the tournament, showing her frustration as she lost a break advantage in the final set to go down 6-3 2-6 7-6 (7/1) to Hsieh Su-wei.

There was disappointment too for British number two Heather Watson, who let a lead slip in a 3-6 6-3 6-4 defeat by Barbora Strycova. Watson was unhappy with a number of line calls and declined to shake the umpire’s hand at the end of the match. World number one Naomi Osaka will open her campaign against Greece’s Maria Sakkari.

Wimbledon finalist Kevin Anderson had to battle back from a set down to begin his 2019 grass court season with a 4-6 7-6 (5) 6-4 victory over Britain’s Cameron Norrie at Queen’s on Monday.

Anderson returned to court for the first time  since March after missing the clay court season due to a lingering elbow injury and looked short on match practice as Norrie claimed the first set 6-4.

The world number eight slowly began to find his groove in the second, but still needed a tie-break to take the match into a deciding set.

Norrie’s serve was finally broken to give Anderson a 3-2 lead and the giant South African served it out to reach round two.

Reigning champion Marin Cilic had an easier afternoon in London as he swept aside Christian Garin 6-1 7-6 (7/5).