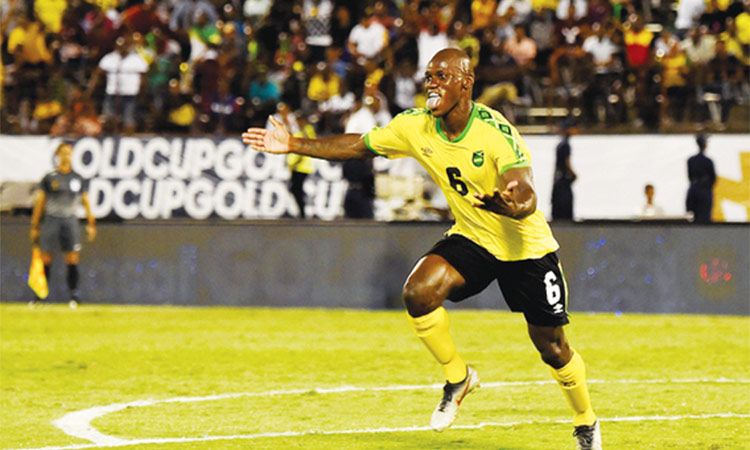 Jamaica’s Dever Orgill celebrates after scoring against Honduras during their Gold Cup match in Kingston on Sunday. Agence France-Presse

Orgill, who plays for Turkish Super Lig Club Ankaragucu, pounced in the 15th and 41st minutes to set the “Reggae Boyz” on the path to victory at Independence Park in Kingston.

The 29-year-old forward headed in a clever cross from Los Angeles FC’s Peter-Lee Vassell for the opening goal and then jinked his way through the Honduras defense to add Jamaica’s second.

Honduras were given a way back into the game on 54 minutes after a defensive slip by Jamaica’s Shaun Francis was seized upon by Alberth Elis.

Houston Dynamo forward Elis dispossessed Francis and then squared unselfishly for Anthony Lozano, who bundled in the finish to make it 2-1.

But Jamaica restored their two-goal cushion almost immediately from a set piece.

Once again Vassell was the architect for the hosts, curling a perfectly flighted corner into the area for Damion Lowe to head home for 3-1.

Roman Castillo pulled a goal back deep into stoppage time to ensure a nervous finale, but Jamaica held on for a deserved win.

In the day’s other game, El Salvador labored to a 1-0 victory over lowly Curacao.

Nelson Bonilla, who plays for Thailand’s Bangkok United, scored the game’s only goal, latching on to a through ball in the final minute of the first half to finish.

Elsewhere, El Salvador got their Gold Cup campaign off to a winning start on Monday with a 1-0 win over Curacao in Jamaica.

Nelson Bonilla ran on to a through ball from Oscar Ceren in the dying seconds of the first half and his angled shot into the bottom right-hand corner of the net proved the winner.

The Group C game was held at Kingston’s Independence Park as part of the Gold Cup expansion plans promoted by the Confederation of North, Central American and Caribbean Association Football (CONCACAF).

In addition to increasing the number of teams taking part in this year’s tournament to 16 from 12, CONCACAF arranged for games to be played in Jamaica and Costa Rica as well as in the United States.

Both teams now head to the US, where El Salvador take on Jamaica in the first game of a double header in Houston on Friday. Honduras play Curacao later the same day.